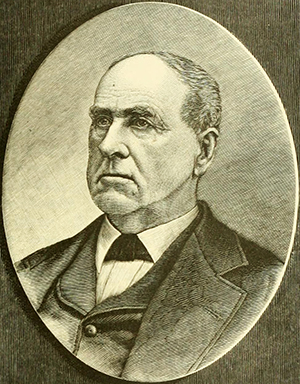 Aquilla Jones, businessman and public official, was born near Salem in Stokes (now Forsyth) County, the son of Benjamin and Mary Jones of Welsh descent. In 1831 the family moved to Columbus, Ind., where another son, Elisha P., had been established for several years as a merchant. Aquilla became a clerk in the store and remained until August 1836, when he moved to Missouri for a year. Returning to Columbus, Aquilla operated a hotel briefly when, at the death of his brother, he acquired the store which he continued until 1856. He also succeeded his brother as postmaster and soon became a member of the first Columbus school board. As a large stockholder in 1849, he became president of the Columbus Bridge Co. and superintended the construction of a bridge across the White River.

Jones's political service included census taker and legislator (1842–43); he declined a presidential appointment as Indian agent for the Washington Territory as well as for New Mexico. In 1844 he was a delegate to the Democratic National Convention, and during the period 1850–52 he published the Columbus Democrat. He was elected state treasurer in 1856 but chose not to stand for reelection because he disagreed with the Democratic party's stand on slavery. On election to state office, he moved to Indianapolis and there became treasurer and afterwards president of the Indianapolis Rolling-Mill; he also served as treasurer of the Gatling Gun Co., president of the municipal waterworks, and postmaster.

As a young man Jones rose to the rank of major in the Indiana militia and during the Civil War served for less than two weeks with the 107th Regiment, Indiana Volunteers, in 1863.

A Biographical History of Eminent & Self-Made Men of the State of Indiana (1880).

B. R. Sulgrove, History of Indianapolis and Marion County (1884 [engraving]).

Pictorial and biographical memoirs of Indianapolis and Marion County, Indiana, together with biographies of many prominent men of other portions of the state, both living and dead. Chicago: Goodspeed Brothers. 1893. 24. https://archive.org/stream/pictorialbiograp00good#page/24/mode/2up