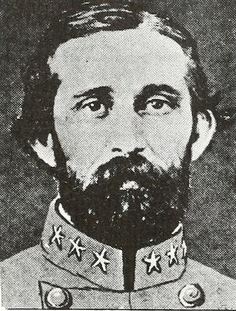 Robert Daniel Johnston, Confederate officer, lawyer, and banker, was born of Scotch-Irish descent at Mount Welcome, Lincoln County. He was a member of a large family reared by Dr. William Johnston, a physician and successful iron manufacturer, who served at one time in the state legislature, and his wife Nancy Forney. Both of Johnston's grandfathers were officers in the American Revolution. As a child he benefited from the advantages available to a well-to-do family. Upon graduation from The University of North Carolina in 1858, Johnston studied law at the University of Virginia. Admitted to the bar of his native state, he practiced law until the outbreak of the Civil War.

When North Carolina seceded, Johnston was an officer in the Beattie's Ford Rifles, a Lincoln County militia company. He entered the Confederate Army as a captain of Company K, Twenty-third North Carolina Infantry. Four of his brothers also enlisted. Commissioned lieutenant colonel on 10 May 1862, Johnston participated in the Peninsular campaign, when he was wounded in the arm, face, and neck at Seven Pines. Cited for bravery at South Mountain and Sharpsburg, he continued to distinguish himself at Chancellorsville and Gettysburg. On 1 Sept. 1863 he was promoted to brigadier general to command five North Carolina regiments. In the battles of May 1864, he suffered a severe wound at Spotsylvania, only to return to lead his brigade in the Shenandoah Valley campaign of 1864. His performance in the Battle of Winchester on 19 September was particularly notable. Returning with his men to Petersburg, he endured the trench fighting until March 1865 when ordered to guard the Roanoke River area and to collect deserters. He was paroled at Charlotte in May 1865.

For the next twenty years Johnston practiced law in Charlotte as a partner of Colonel Hamilton C. Jones. In 1887 he moved to Birmingham, Ala., to assume the presidency of the Birmingham National Bank. The practice of law, numerous business investments, and mining promotions also contributed to make Johnston a leading citizen of the city. For a number of years he was registrar of the Federal Land Bank Office. Johnston and his wife were instrumental in the establishment of a state industrial school for boys near Birmingham.

In 1871 Johnston married Elizabeth Johnston Evans, and they were the parents of three sons and four daughters. He died in the home of a son in Winchester, Va., where he was buried.