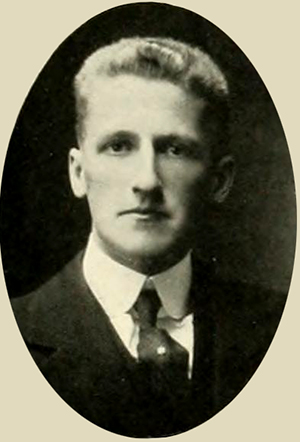 Herschel Vespasian Johnson, foreign service officer, was born in Atlanta, Ga., the son of Arabelle Kenan Horne and William White Johnson. Arabelle Horne was a granddaughter of Governor Herschel V. Johnson of Georgia. Not related to his wife's family, William White Johnson also grew up in Georgia, reared by a strict Presbyterian grandmother. A well-read man with broad interests, he was in the insurance business and settled in Charlotte in 1900. Herschel attended the Charlotte public schools, and from the beginning was an able student and an omnivorous reader, never athletic, and as a child not especially sociable.

At The University of North Carolina, where he was graduated in 1916, Johnson majored in history and also concentrated on languages and literature. He was conspicuous as the energetic "inventor" of a student play-reading club and dramatic workshop, and as the student who hung reproductions of Italian and other old masterpieces on the walls of his dormitory room. His classmates noted in the university annual his "cosmopolitan turn of mind . . . extensive reading in many fields of literature . . . keen perception and accurate judgment of men." He helped meet his college expenses with summer jobs in Charlotte and part-time jobs in Chapel Hill. He returned to the university in 1947 for an honorary LL.D. degree.

After graduation he taught French at Dr. Churchill Gibson Chamberlayne's school (later St. Christopher's) in Richmond, Va., and in 1917 enlisted in the army. He served overseas as first lieutenant, later captain, in the Fifty-fourth Infantry, with the Sixth Division in the Vosges Mountains and in the Meuse-Argonne offensive. Between the armistice and his return home, he spent five months in Burgundy, went twice to Italy, and was briefly in England, Scotland, and Paris. He attended Harvard Law School in 1919–20 and took the entrance examinations in Washington, D.C., for the Diplomatic Service. His appointment came on 15 Nov. 1920.

Johnson's first assignment abroad took him to Switzerland as third secretary to the legation at Berne (January–December 1921). From there he went to the legation in Sophia, Bulgaria, as second secretary for the next nineteen months. Bulgaria was unsettled by internal political strife and postwar economic adjustments, and twenty-nine-year-old Johnson was serving as chargé d'affaires when a coup d'état occurred in June 1923, with bloodshed in the streets. In July, he was assigned to the State Department's Division of Near Eastern Affairs in Washington for the next three years. Subsequently, for seven years (October 1926–February 1934), his province was Latin America.

He was second secretary at the legation in Tegucigalpa, Honduras (1926–28), where he also served as chargé d'affaires. His memories of 1928 included news-making visits by President-elect Hoover and by Charles A. Lindbergh. Johnson's next assignment was as first secretary in the Mexican Embassy under Ambassador Dwight W. Morrow. Morrow's tenure saw the establishment of more cordial U.S.-Mexican relations for the first time in nearly two decades, and ongoing negotiations concerning American oil investments and war-related claims in Mexico. Johnson was in charge during Morrow's absence from August 1929 until the following spring, when he was transferred to Washington. There he occupied the desk of the chief of the Division of Mexican Affairs for nearly four years.

From February 1934 to November 1941 he was at the embassy in London, as first secretary for three years and then counselor (second in command) for four years, with the rank of minister dating from February 1941. The London years were marked by critical international trade agreements, gathering war clouds, and the Nazi blitzkreig. Johnson represented his country at meetings of the Governing Body for Assistance to Refugees Arriving from Germany (1934), the International Sugar Council (1937–41), and the International Conference on Whaling (1937–39). He was responsible for aiding refugees and later for evacuating U.S. citizens in the war zone. At various times for a total of two years he was acting ambassador, including the interims following the death of Robert W. Bingham and the departure of Joseph P. Kennedy. It was Johnson who conveyed President Roosevelt's mediation proposal of 15 Apr. 1939 to the governments of Hitler and Mussolini. During the height of the blitz, Johnson lived at Claridge's Hotel and reported to his family in North Carolina that he was able to do a great deal of reading in the long hours in the bomb shelter.

Three days before the Japanese attack on Pearl Harbor, Johnson arrived in Stockholm to undertake the diplomatically ticklish role of U.S. minister in neutral Sweden, which was at that time surrounded by German-occupied territory. His work in assisting refugees continued. One of his duties was to discourage, as far as possible, Swedish exportation of strategic industrial materials to Germany. After the war, the Swedish press praised his intelligent understanding of Sweden's difficult position while he was handling negotiations between that nation and the United States. During the war years the legation grew from 40 to about 300, all of whom had to be airlifted in and out. The burgeoning staff had work to do in the country that served as "listening post" and "hotbed for intrigues of all the belligerants." When Johnson departed London in 1941, the Times had called him a "skillful and tactful" administrator, liked for his "quiet and friendly way"; in Sweden he proved to be efficient under pressure and hard-driving, attending to his job seven days a week. He demanded—and got—"something close to perfection" from his junior staff. In April 1945 it was Johnson who handled the delicate communications in connection with Heinrich Himmler's unacceptable separate peace proposal, which had come via Count Folke Bernadotte of the Swedish Red Cross.

The main actions in which he participated during his two years at the United Nations were related to the Greek and Balkan crises, the Palestine question, and attempts to break the deadlock on negotiation procedures for both conventional disarmament and atomic control. He sparred with Russia's Gromyko and returned the fire of the Soviet delegate. Journalist Evelyn G. Kessel observed that Johnson "delivered his remarks courteously yet with provocative firmness—occasionally with a touch of sarcasm. Set jaw and narrow eyes gave a measure of his determination." Throughout these months his public addresses emphasized the urgency of atomic control, the importance of popular support for the United Nations as a place to thrash out disagreements, and his conviction that "we invite aggression . . . if we do not hold ourselves in readiness to take our full share of military responsibility for world security." In his home state he was chosen to receive the Carolina Israelite 's award for "Outstanding Brotherhood during 1947."

Johnson was temporarily felled by a heart attack in December 1947, recuperated in Puerto Rico and in Charlotte, and was in Washington five months later to take his oath of office as ambassador to Brazil.

From the time of his arrival in Rio de Janeiro in June 1948, Johnson was involved in negotiations concerning U.S. programs for Brazil's economic development; in the readjustment of outdated commercial relationships; and in attempts to gain Brazilian understanding of U.S. foreign aid programs that were weighted in favor of other areas of the world. Time magazine tagged him as his country's "New Explainer." There were misunderstandings to be resolved that arose from the overlapping functions of international agencies for planning, loans, and technical aid. Among the agreements signed during Johnson's ambassadorship were those providing for the Joint Commission for Economic Development and other broader technical cooperation agreements; programs in health and sanitation and vocational industrial education; an oil shale study in Brazil; and a Joint U.S.-Brazil Military Assistance Pact, in conformity with the United Nations charter and the U.S. Mutual Security Act of 1951. The military assistance pact, which included provisions for cooperative economic defense and commercial controls, was not immediately embraced by all parties in Brazil.

When President Dutra visited the United States in 1949, Johnson came home to serve as official host. On his return to Rio, he was accompanied by his mother; thereafter she made her home with him, graciously sharing his social and ceremonial duties. A new twelve-story American embassy was dedicated just before Johnson's departure in June 1953. At the end of his term, influential Rio newspapers were laudatory, and the Brazilian government soon afterwards awarded him the Order of the Southern Cross in the rank of grand cross.

On his retirement Johnson established a home in Charlotte where he led a relatively quiet life, especially in the years after his mother suffered a stroke. For several years he accepted invitations to speak, without remuneration, in and around Charlotte, and often he took these occasions to stress the importance of South America to the welfare and destiny of the United States. He served in 1958 on the fifteen-man North Carolina Constitutional Commission. His kin, his discussions with a circle of old friends—"The Philosophers Club," and, as always, his reading, were the happy stimulants of these later days. He was a member of St. Peter's Episcopal Church, the English-Speaking Union, and the Rotary Club in Charlotte; the Masonic order; Sigma Chi; the American Foreign Service Association; and the Metropolitan Club of Washington, D.C. Politically he was a Democrat.

In interviews with journalists, Johnson had testified to the lack of "Hollywoodish glamor" in the hard day-to-day work of a foreign service officer, but he relished that hard work for thirty-three years and liked every country he lived in. All his life he was intensely interested in the variety of events, people, places, art, and ideas that were his milieu. He was, as he said of himself, "a student by nature." He never married.

Johnson was buried in Elmwood Cemetery, Charlotte. An oil portrait, painted while he was in Brazil, is owned by the University of North Carolina at Charlotte. He gave a large part of his library to that institution in 1963. Some pieces from his fine collection of antique Chinese ceramics are now owned by the Mint Museum in Charlotte. His papers are preserved at the Truman Presidential Library in Missouri and at the University of North Carolina Library in Chapel Hill.

Biographic Register of the United States Department of State, 1 Apr. 1951.