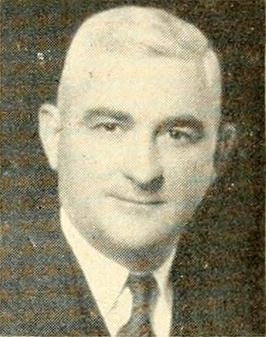 Charles Marion Johnson, public official, was born at Burgaw, the son of M. H. and Minnie Norris Johnson. He attended school in his hometown, then Buies Creek Academy and the Bingham School at Mebane. After leaving school, he was employed for a year as assistant cashier in the Wilmington office of the Atlantic Coast Line Railway and then became traveling auditor for the Hilton Dodge Lumber Company at Savannah, Ga. Returning home, he was deputy clerk of court of Pender County for seven years followed by eighteen months as district tax supervisor under the Revaluation Act. Moving to state government, Johnson spent more than five years in various positions in the State Auditor's Office, serving first as a traveling auditor, one year as auditor of disbursements, and finally as deputy auditor.

After this apprenticeship in state finance, Johnson was appointed secretary to the County Government Advisory Commission by Governor Angus W. McLean. Through service in this position, he became familiar with the concerns of local government. He also became well known to the state's county commissioners, who appreciated his ability to deal with them in a frank, commonsense way. Johnson's manner was crisp but good-humored. His success in dealing with problems at the local level attracted the attention of Governor O. Max Gardner, who appointed him the first director of the Local Government Commission, which was created by the legislature in 1931.

Upon the resignation of the state treasurer, John Stedman, on 17 Nov. 1932, Governor Gardner named Johnson to be treasurer of North Carolina. This was shortly before the end of Gardner's administration, and his successor, J. C. B. Ehringhaus, recommended and secured from the legislature of 1933 a consolidation of the office of Director of Local Government and that of the state treasurer. Johnson thereby became the guardian of the credit not only of the state, but of its subdivisions as well. By his keen insight into, and his wise appraisal of, the financial problems of the state and its counties, cities, and towns, Johnson became a trusted adviser in matters of public finance and extremely popular with the people of North Carolina.

Johnson was elected to fill the unexpired term of Stedman, and then was regularly reelected for four-year terms until 1948 when he became a candidate for governor. He led in his party's primary by a small margin, but in a runoff W. Kerr Scott won and was elected governor. Johnson did not allow defeat to slow his pace, nor did he harbor any bitterness. Remaining active in both private and public life, he joined the First Securities Corporation in Durham and later became executive vice-president of the Bank of Charlotte. President Harry S Truman later appointed him collector of customs at Wilmington. In 1956 Johnson withdrew from public service and devoted himself to his varied business interests in Raleigh, except that he served two terms on the State Banking Commission by appointment of Governor Terry Sanford.

Johnson's tenure as state treasurer coincided with one of the most depressed and tragic periods in the history of North Carolina. Many local governments were in default, and the state had outstanding short-term borrowings in New York that were to have been paid out of current collections. The continued decline in the state's economy, however, made this impossible. It was up to Johnson, as treasurer, to be the right arm of governors Gardner and Ehringhaus in securing the renewal of the notes in New York (and the ultimate funding of them as a casual deficit under the provisions of the state constitution), and later to negotiate with the creditors of local governments for the purpose of getting them on a sound financial basis.

Johnson died of a heart attack at Rex Hospital, Raleigh, at age seventy-three. His wife, whom he married in 1920, was Ruth Moore of Burgaw; they were the parents of one son, Charles M., Jr., born in 1924.