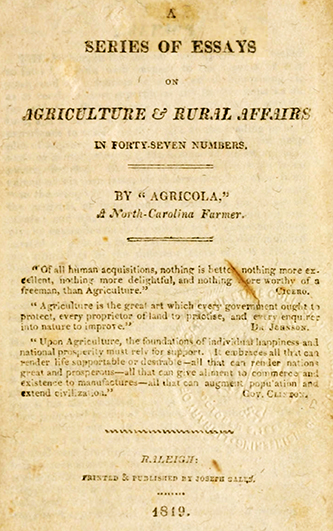 George Washington Jeffreys, clergyman, agriculturalist, and author, of Person County, entered The University of North Carolina in 1813 and remained there for one academic year. In 1817 he married Pherebe Smith Hinton, the daughter of Major John and Pherebe Smith Hinton of Wake County. They had four daughters: Mary Mildred, Ann Eliza, Candace, and Cornelia. Mrs. Jeffreys died in 1827, and in 1829 he married Helen Jones, the daughter of Nathaniel "White Plains" and Rachel Perry Jones of Wake County. There were no children from his second marriage.

As corresponding secretary of the Agricultural Society of North Carolina, Jeffreys sought to promote experimentation in agricultural methods in the state. He collected letters on innovative techniques in Virginia and Pennsylvania, and printed the letters in the American Farmer, a leading agricultural journal published in Baltimore. This was the first such periodical in the United States and was widely read in North Carolina. In the late 1820s Jeffreys became one of the first systematic writers on the breeding of fine horses in America.

Among his correspondents were Josiah Quincy of Massachusetts; William Painter and Judge Richard Peters of Pennsylvania; and John Slaughter, Robert Russell, Thomas Marshall, Thomas Jefferson, William Meriwether, John Taylor of Caroline, William Noland, and Thomas Melville, Jr., of Virginia. These men discussed the advantages of various new agricultural processes, such as deep ploughing, liming and manuring of fields, crop rotation, and horizontal ploughing, as well as the merits of raising hogs and planting corn. Of each man, Jeffreys inquired about ways to improve exhausted land and the effects of better agricultural methods on his farm. He received from Thomas Jefferson, John Taylor of Caroline, and Judge Richard Peters suggestions of books essential to a good agricultural library.

Jeffreys also advocated that the state of North Carolina encourage and sponsor agricultural experimentation. Writing under the pseudonym " 'Agricola,' A North-Carolina Farmer," he was the author of A Series of Essays on Agriculture & Rural Affairs in Forty-Seven Numbers (1819), printed in Raleigh by Joseph Gales.

Early in the summer of 1848, Jeffreys visited Patrick Mineral Springs in Patrick County, Va., to improve his health. There his conditioned worsened, so he moved to Patrick Court House where he could receive better medical attention. He died soon afterwards, however, and was buried in the family burying ground, probably located in Person County.

Kemp P. Battle, History of the University of North Carolina (1907).