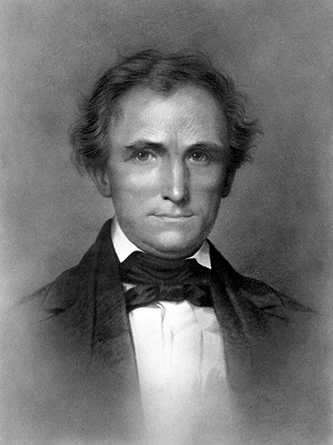 Robert Boyté Crawford Howell, Baptist minister and leader, was born in Wayne County. Although of Episcopal heritage, he joined the Baptists at age twenty. He attended Columbian College in Washington, D.C., but left for home after the 1825–26 session to study the law. Persuaded to become a missionary instead, Howell was ordained in January 1827. At the same time he became pastor of the Cumberland Street Baptist Church of Norfolk, Va. In April 1829 he married Mary Ann Morton Toy; of their ten children, eight grew to maturity.

In 1834 Howell visited Nashville, Tenn., where he accepted appointment by the American Baptist Home Mission Society as a missionary and pastor of the First Baptist Church. His work, which began on 1 Jan. 1835, coincided with the controversy between Baptists and the followers of Alexander Campbell. Most of the members of the church he was to serve, as well as the former pastor, had gone over to Campbellism, claiming the church building as well. Howell led the successful effort to erect a new building. Within a short time, Howell had become the recognized leader of Baptists in Tennessee. He began a newspaper, The Baptist, which he edited for thirteen years; promoted Sunday schools and missionary societies; and organized societies for education and ministerial improvement, as well as for Bible publication and distribution. In addition, he was instrumental in establishing a school called Union University (not the present one) and in the formation of the Baptist General Association (Convention) of Tennessee and Alabama in 1842.

In 1850, Howell moved to Richmond, Va., to become pastor of the Second Baptist Church. After remaining there seven years, he returned to his Nashville pastorate. During his absence, Landmarkism had emerged. This extreme right-wing party, which would have a devastating impact on Baptists in the Southwest, was led by James Robinson Graves, a member of Howell's church, and Nashville was its hub. Howell perceived the danger of the new movement, not only to the local congregation, but also to all institutions of the Southern Baptist Convention. He openly opposed Graves and fought his teachings all the way to a historic session of the Southern Baptist Convention at Richmond, where the convention voted to reject Landmarkism.

Howell was much respected by Baptists throughout the South, serving two four-year terms as the second president of the Southern Baptist Convention. He was reelected at the Richmond convention in 1859, but immediately resigned. His confrontation with Graves broke the power of Landmarkism, but its effects were evident for a hundred years.

When the Union Army captured Nashville in February 1862, Howell's church was seized for military purposes and he and three or four other ministers were imprisoned. Howell was confined for only two months, but his health was impaired. He died several years later in Nashville and was buried in that city's Mount Olivet Cemetery.

P. E. Burroughs, The Spiritual Conquest of the Second Frontier (1942).