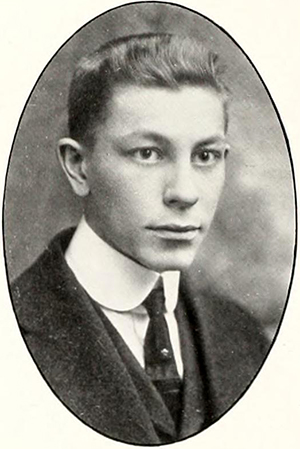 Robert Powell Holding, banker, was born in Wake Forest, one of seven children of Minta Royall and Thomas Elford Holding. He attended the local public schools, then entered Wake Forest College in the fall of 1912. After receiving a B.A. degree in 1916, he immediately enrolled in the Wake Forest Law School from which he was graduated in 1917. Holding passed the North Carolina Supreme Court examination for a license six months before he was of age to practice law. He took a position as bookkeeper-teller in the Bank of Morehead City and in less than a year was assistant cashier.

In January 1918, Holding joined the First National Bank of Smithfield as assistant cashier and bookkeeper-teller. The bank was an outgrowth of the Bank of Smithfield, begun in 1898 with a paid-in capital of $10,000. In 1916 First National purchased the Smithfield Savings Bank and in 1919, when Holding was appointed cashier, its total resources amounted to $500,000. In 1921 the bank merged with Citizens National Bank and became the First and Citizens National Bank. Holding, who by age thirty had established himself as a hardworking, farseeing, and aggressive leader, was elected president of this growing firm in 1926. Adopting a state charter in 1929, the bank changed its name for the last time to First-Citizens Bank & Trust Company. During the ensuing depression years a great many banks failed, but not First-Citizens. From 1929 to 1934 First-Citizens, under Holding's leadership, opened banks in fifteen towns throughout eastern North Carolina. In 1932 Holding was made president of the Regional Agricultural Credit Corporation, established that year by the federal government to serve the two Carolinas, Georgia, and Florida. With all the millions of dollars loaned by the corporation, 99.9 percent of the principal and interest was collected. During the depression, he also was a financial adviser to President Franklin D. Roosevelt. In 1934 the board of First-Citizens elected Holding president and chairman, positions he held until his death. By 1938, when a wrecked national economy had spawned a rash of defunct banks across the country, First-Citizens had paid its eightieth consecutive semiannual dividend.

Under Holding's direction, the First-Citizens Bank & Trust Company continued to grow and prosper, adding four more offices in the 1940s and additional branches in communities already served. By the end of 1949, the bank's total resources amounted to more than $132 million. It was the first bank in the state to establish an installment loan or time payment department. At the time of Holding's death, the bank was operating in 32 communities through 45 separate offices with resources totaling more than $200 million.

Notwithstanding his countless hours at the bank, Holding found time for public service. In 1939, he was appointed to the newly created State Banking Commission by Governor Clyde R. Hoey, and served until his death. As president of the North Carolina Bankers Association during 1942–43, Holding began an illustrious career of service to numerous professional organizations, including a period on the executive committee of the American Bankers Association. He was one of the original members of the North Carolina Securities Advisory Commission and became widely recognized in the national bond market as a securities expert. Holding personally handled the investment portfolio of First-Citizens.

He also was president of Seashore Transportation Company and a director of State Capital Life Insurance Company, Carolina Telephone and Telegraph Company, and Textron, Inc. He served on the board of trustees of Wake Forest College, which in 1957 awarded him the honorary doctor of laws degree, and of Campbell College. In addition to his work in the Baptist church and the Kiwanis Club, Holding was a generous yet unassuming philanthropist, making countless contributions to individuals and educational institutions.

On 11 Jan. 1922 he married Maggie Brown of Bethel. They had three sons: Robert Powell, Jr., Lewis Royall, and Frank Brown.