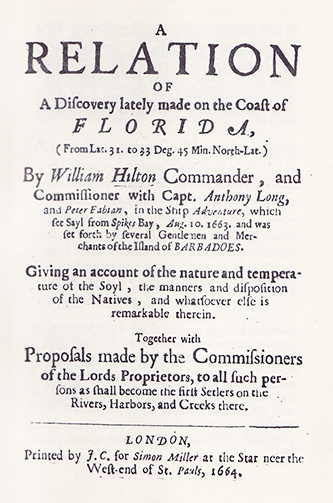 William Hilton, leader of expeditions to the Cape Fear River region of North Carolina in 1662 and 1663, was born in Northwich, Cheshire, England. He arrived in New Plymouth with his mother in 1623 to join his father, William, who had crossed on the Fortune in 1621 and eventually settled at the Piscataqua.

Hilton evidently went to sea at a fairly early age and led a busy life, as there are references to his having been to Surinam, London, and Barbados in addition to Carolina. In 1662, he was chosen as captain of the ship Adventure on a voyage to explore the area then known as Florida, which included the eastern coast apparently as far north as the Carolinas. The expedition sailed from Charlestown, Mass., on 14 Aug. 1662, and was composed of New Englanders seeking a more desirable place to live. The Adventure reached the Cape Fear area on 3 September but was blown off course, probably by a hurricane, before she could enter the mouth of the river. Hilton finally guided the ship up the river mouth on 3 October and set about exploring the waterway and the land on either side. The main river was called the Charles River (later the Cape Fear River) and its numerous branches and tributaries were named after some of the explorers on board, particularly Samuel Goldsmith, Lieutenant Enoch Greenleaf, John Greene, James Bate, Edward Winslowe, and Hilton himself. The group scouted the river area for several weeks, sailing as far as the present Northeast Cape Fear River—a distance of some 35 miles from the mouth of the Cape Fear River. The earliest known map of the Cape Fear area was prepared by Nicholas Shapely from information written down in chronicle form in November 1662 when the expedition returned to New England.

The chronicle of this first voyage was not known to have existed for some time; it was published in the April 1970 issue of the New England Historical and Genealogical Register in an article by Louise Hall. The chronicle, which was most likely written by John Greene, praises the beautiful land, abundant land and water wildlife, bountiful forests, and wild fruits, especially grapes, that the explorers found. The glowing description of the area led to an attempt at settlement by another group of New Englanders, in which Hilton played no role; the effort failed, and the New Englanders returned home.

Hilton's seafaring life took him to Barbados, where in 1663 he was named commander and commissioner with Captain Anthony Long and Peter Fabian of a voyage to what is now the coast of North Carolina and South Carolina. The expedition, which "was set forth by several Gentlemen and Merchants of the Island of Barbadoes," left from Spikes Bay, Barbados, aboard the Adventure on 10 Aug. 1663. Land was sighted on 26 August near Port Royal, S.C., and the ship anchored farther north in St. Helena Sound. The explorers were visited numerous times by Indians, from whom they learned of a party of shipwrecked Englishmen held by the Indians. The expedition was able to rescue them and set sail on 28 September. Hilton's enthusiastic description of the area later led to a number of attempts at settlement in South Carolina.

While sailing northward up the coast, Hilton was once again blown off course almost to "Cape Hatterasse," according to his chronicle. The ship finally anchored in the Cape Fear River on 12 Oct. 1663 but was unable to proceed—because of unfavorable winds—until 24 October. The Adventure continued slowly up the river for two days, then anchored. Twelve men rowed farther in a long boat, returning on 2 November. In the succeeding days the various tributaries and some of the shoreline were explored and described in Hilton's chronicle. Most of the land was found to be very desirable; it offered "as good tracts of land, dry, well wooded, pleasant and delightful as we have seen any where in the world," wrote Hilton, and contained an abundance of good timber and wildlife. As a final testimony to the Cape Fear and in an attempt to refute the complaints of the New Englanders, which he found in the form of "Writing left on a post" in the area and described as "scandalous," Hilton noted in his chronicle "that we have seen facing on both sides of the River, and Branches of Cape-Fair aforesaid, as good Land, and as well Timbered, as any we have seen in any other part of the world, sufficient to accomodate thousands of our English Nation, lying commodiously by the said River." The party set sail for Barbados on 4 December and arrived on 6 Jan. 1664.

When the expedition returned, Sir Thomas Modyford and Peter Colleton—two of the organizers of a group of two hundred Barbadians (known as the Barbadian Adventurers)—made numerous proposals for settlement of the area by their group, but were refused by the Lords Proprietors, holders of the newly granted Carolina charter. Hilton, Long, and Fabian were granted 1,000 acres of land for their efforts but none claimed the grant within the specified time period.

Little is known of Hilton after his "A Relation of a Discovery," describing the Barbadian expedition, was published in 1664. The primary record of a man's life during this time was his will, but Hilton's will disappeared after his death. His name survives in several ways, particularly in South Carolina where Hilton Head and Hilton Head Island were named for him.