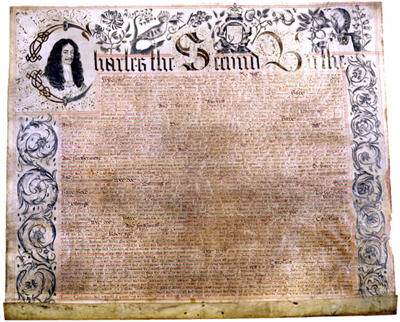 Shortly after his restoration as English monarch in 1660, King Charles II granted the territory of Carolina to a number of supporters who had helped him regain the throne. The resultant charter (or "letters patent") of 1663 granted to the eight Lords Proprietors all of the territory between 31° and 36° north latitude from the Atlantic Coast to the Pacific Ocean, or in effect from about 70 miles south of the border of present-day Florida to about 40 miles south of the present northern boundary of North Carolina. King Charles I had granted the same territory to his attorney general, Sir Robert Heath, in 1629. Inactivity under that grant led to its presumed lapse, although a succession of unsuccessful claimants under the Heath grant pressed their suits well into the next century.

A further grant to the Proprietors in 1665 extended the northern boundary 30 minutes, to the present border of North Carolina and Virginia. The Proprietors held the land in "free and common soccage," which meant that instead of being required to furnish armed knights to serve the king when necessary, a substantial annual payment constituted the service. (Several decades later the Lords Proprietors were so far behind in their payments that the Crown threatened to revoke the grant.) 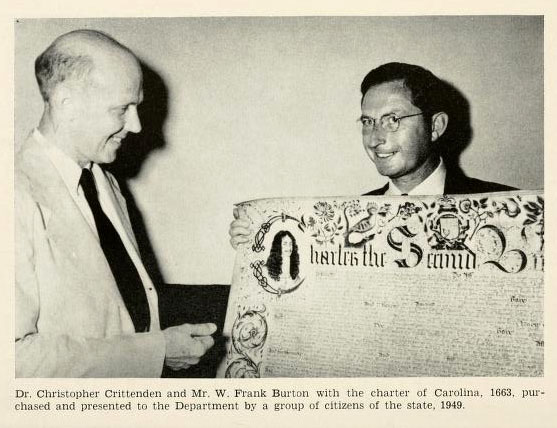 The charters of 1663 and 1665 granted not only the soil of Carolina but extensive rights of governance as well. Many powers bestowed upon the Lords Proprietors derived from the clause in the charter granting them those prerogatives traditionally enjoyed by the bishop of Durham, who in the Middle Ages was in effect a viceroy in the turbulent border region of northern England. The Proprietors were empowered to make laws, "with the advice, assent, and approbation" of the freemen or their representatives, and to make orders and ordinances without such approval. They could also establish courts; appoint judges and other officials; grant lands; erect towns, seaports, and forts; make war; and create and bestow titles of honor. Most of the charter's provisions were later incorporated into the Fundamental Constitutions of Carolina, including one permitting a generous measure of religious tolerance.

In 1949 the state of North Carolina acquired the Carolina charter of 1663 from a bookseller in England at a cost of slightly more than $6,000; it is in the possession of the North Carolina State Archives.