Frederick Jones Hill, physician, planter, and legislator, was born at his father's plantation, Fairfields, in New Hanover County. He was the son of Elizabeth Jones and John Hill, an officer in the Continental Army. His grandparents were William and Margaret Moore Hill, and Frederick and Jane Swann Jones. For one year (1805–6) Hill attended The University of North Carolina, where he was a member of the Dialectic Literary Society. In 1811–12 he studied medicine at the College of Physicians and Surgeons, New York City. Hill practiced medicine in Wilmington but later gave it up for agriculture. Nevertheless, his reputation in the state as a physician continued. In April 1849 he was elected chairman of the State Medical Convention, which met at Raleigh to form a medical society. Following the organization of the Medical Society of the State of North Carolina, Dr. Edmund Strudwick of Hillsborough nominated Hill to be its first president. Hill asked that his name be withdrawn as he had not been in active practice for many years. The society then unanimously elected him an honorary member.

On 2 Apr. 1812 Hill married Ann Ivy Watters, of Chatham County, the daughter of William and Mary Watters. The ceremony was performed at Forceput, a relative's plantation in New Hanover County. The couple had no children. In 1825 Hill purchased from his mother-in-law a property near Pittsboro he named Kentucky, which became the Hills' summer home. A year later he bought Orton Plantation, located on the Cape Fear River in Brunswick County, from the estate of the late Governor Benjamin Smith. Orton was built about 1725 by Roger Moore, a collateral ancestor of Hill's. The principal crops of the 4,975-acre plantation were rice and cotton. About 1840 Hill made considerable improvements to his home by adding a second floor and attic as well as four Doric columns to the facade of the house. In 1854 he sold Orton to Thomas C. Miller, who had married his wife's niece, Annie W. Davis. Hill then returned to Wilmington where he had retained his earlier home. 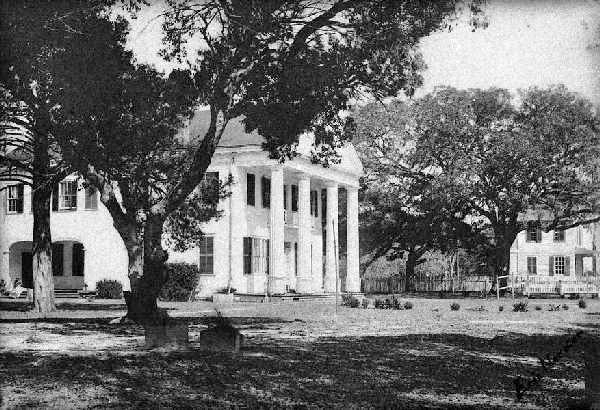 A staunch Whig, Hill first served in an elective office as a representative from Brunswick County to the North Carolina Constitutional Convention of 1835, but he did not play a significant role as delegate. On the major reforms of the old constitution he voted for biennial sessions of the General Assembly, popular election of the governor, and religious toleration by substituting the word "Christian" for "Protestant" in the state constitution. He voted against the amendment to abolish borough representation in the legislature.

In 1835, Hill represented Brunswick County for one term in the North Carolina Senate. During this session he was elected a trustee of The University of North Carolina, serving until 1860. He represented his county in the House of Commons in 1836, 1838, and 1840, and in every session was appointed a member of the Committee on Internal Improvements. He supported the measures of the Whig party to build roads, canals, and railroads. His most valuable contribution, however, was in the field of education. In a speech delivered in the House of Commons on 10 Dec. 1838, Hill advocated using a part of the funds derived from the sale of state land to support public schools. He said that it had always been one of his most cherished desires "to furnish the means of a plain education to every citizen within our limits." Moreover, he continued, the word "education" meant "something more than the mere imparting of instruction; it is the engrafting of knowledge upon a good stock, the application of all those means calculated to develop the physical, moral, and intellectual faculties of man." In conclusion, Hill declared that "In a government founded upon the popular will, Education is necessary for all classes, and for each individual in the community—and it is the duty of such Government to take care that this great end be secured." Three weeks after making this speech, Hill introduced in the House "A Bill for the establishment of Common Schools." A similar bill had been introduced in the Senate a few days earlier by William W. Cherry of Bertie County. After several amendments had been made to the Hill and Cherry bills, the two houses agreed on a measure, which was passed on 7 Jan. 1839, to begin North Carolina's common school system. At the next session of the General Assembly, Hill introduced another bill to provide for the better regulation of the common schools; it was passed with amendments on 9 Jan. 1841.

In 1840 Hill was a delegate to the Whig National Convention, held in Harrisburg, Pa., where he voted for William Henry Harrison and John Tyler as his party's candidates for president and vice-president. He was a strong supporter of the Whig party's attempt to reestablish the Bank of the United States, which Tyler later opposed. When Hill ran for reelection to the House of Commons in 1842, he was defeated. He wrote a friend that "Mr. Tyler has thrown the weight of his name (or rather that which hangs around the office he accidentally fills) into the canvass to my prejudice." This defeat marked the end of his political career.

A member of the Episcopal church, Hill represented St. James Parish, Wilmington, ten times in the diocesan conventions and St. Bartholomew's, Pittsboro, twice. In 1831 he and his uncle, Dr. Nathaniel M. Hill, gave the land in Pittsboro on which St. Bartholomew's Church was built; they also guaranteed the cost of its construction. When Hill died, he left the Diocese of North Carolina his residence in Wilmington, 20 acres of land, and $10,000 "for the benefit of the poor orphans of the state of North Carolina"; he also bequeathed $4,000 to St. Bartholomew's Church, Pittsboro. The bequests were not to take effect until the death of his wife. Hill was buried in the family lot in Oakdale Cemetery, Wilmington.

Journal of the Proceedings . . . of the Protestant Episcopal Church in the State of North Carolina, 1821–51.

North Carolina, Journal of the Senate and House of Commons, 1835–41.

Proceedings of the State Medical Convention, Held in Raleigh, April 1849 (1849).