Isabelle Bowen Henderson, portraitist and floriculturist, was born in Wilmington, the daughter of Arthur Finn Bowen, who was for many years business manager of North Carolina 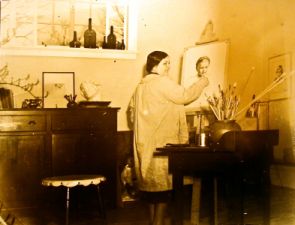 State College, and Isabelle Woodward Bowen, of an old Wilmington family. After attending the Raleigh public schools, she entered Peace College in 1917 and was graduated in 1919. She taught art at the Centennial School in Raleigh from 1919 to 1921; at College Hill School, Easton, Pa., from 1922 to 1924; and at various times prior to 1930 in summer sessions at North Carolina State and at Wake Forest College. In 1921–23 she continued to study art during the summer at Columbia University and at the School of Fine and Applied Arts (now Parsons School) in New York City. In 1924–25 she was a student at the Pennsylvania Academy of Art in Philadelphia.

She began her career as a professional portraitist in Raleigh in the late 1920s. After her marriage to Professor Edgar H. Henderson in 1932, she moved to Williamstown, Mass., where her husband was a member of the faculty of Williams College. On returning to Raleigh in 1936, she opened a studio and became widely known in the eastern part of the state especially for her crayon portraits of children. In the 1940s she continued painting in Raleigh and in Gainesville, Fla., where her husband had joined the faculty of the University of Florida. In addition to her crayon portraits for many leading North Carolina families, she was commissioned to do oil portraits of such prominent figures as President Frank Porter Graham of The University of North Carolina, President Wallace Carl Riddick of North Carolina State College, Supreme Court Justice Beverly Lake, and Dr. Charles Carroll of the North Carolina Department of Public Instruction.

Mrs. Henderson's garden early became famous both in the area and beyond for its collection of iris and hemerocallis, for the hybridization of which she received the highest award of the National Society of State Garden Clubs in 1951 and recognition from the National Horticulture Society. She was active in the Raleigh Garden Club as well as a popular lecturer in garden clubs throughout the region. She was also an important and forceful member of the North Carolina Art Society and was one of the moving spirits in the establishment and development of the North Carolina Art Museum. Mrs. Henderson was mainly responsible for the museum's excellent collection of Jugtown pottery.