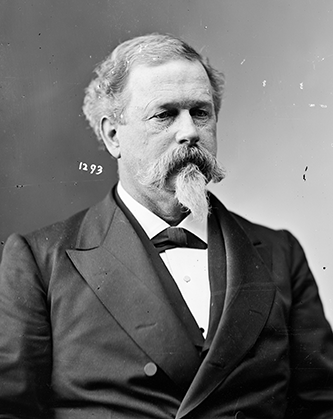 Joseph Roswell Hawley, attorney, editor, Union general, congressman, and senator, was born in Stewartsville, Richmond (later Scotland) County, the son of Mary McLeod and the Reverend Francis Hawley. Hawley's mother was born in Fayetteville of Scottish descent and was related to prominent families in the county. His father, whose English ancestors arrived in New England in 1629, was a native of Farmington, Conn.; he came to North Carolina in the 1820s as an itinerant merchant and became a Baptist minister in 1834. Francis held staunch antislavery views, which were to have a significant influence on his son's character and political career. Joseph, who attended school in Cheraw, S.C., recalled only two other Unionist boys during the Nullification crisis, both with Northern fathers. Francis was threatened with assault by mobs and individuals as a result of his abolitionist views and finally left North Carolina with his family in 1837, never to return. Joseph, then age eleven, was never to forget the bitterness and insecurity of those early years.

The Hawleys settled in Connecticut, where Joseph worked summers on the family farm and for two years attended Hartford Grammar School. In 1842, the family moved to Cazenovia, N.Y.; there Joseph prepared for college at the Oneida Conference Seminary. Francis Hawley remained in Cazenovia until his death in 1884, became a Congregationalist, and remained a powerful figure of speech and letters in the abolitionist and related movements. Mary McLeod Hawley was a woman of great dignity, strength, piety, and kindness. Joseph had two sisters, Mary Ann and Diadumena ("Dia"). Both married; Mary, the oldest, who became the wife of a New York farmer, a Pettibone, survived her brother.

In the fall of 1844, young Hawley entered Hamilton College as a sophomore and was graduated with honors in 1847. At school, he excelled as an orator and debater, talents that became hallmarks of his career. Throughout life, Hawley was a man of great physical vigor; his rugged physique and excellent health carried him through many difficulties.

Following graduation, he taught for two winters and in June 1849 began to study law with John Hooker. In May 1850 Hawley was invited to become a partner with Hooker, and Hartford, Conn., became his permanent residence. In 1855, he married Harriet Ward Foote, of a prominent Connecticut family. Because of his strong abolitionist views, Hawley became coeditor of the Republican ; he was active in the Free Soil party and also toyed briefly with Nativism. In February 1856, in his law office, he founded the Connecticut Republican party, along with Gideon Welles, later President Lincoln's secretary of the navy, and other distinguished political figures. While his law and newspaper career flourished, Hawley also made his name as a political speaker for John Charles Frémont in 1856.

Hawley soon withdrew from the law practice to become editor of the Hartford Evening Press. Initiated by Welles, Hawley's new venture became the foundation for an impressive political career, allowing his voice and pen to reach a much larger audience. Charles Dudley Warner, a college chum and lifelong friend, joined the editorial staff in 1860. Together they made the Press a persuasive Republican organ throughout New England.

An early supporter of Abraham Lincoln, Hawley attended the 1860 nominating convention and feted the candidate in Hartford. Following the attack on Fort Sumter, he was the first from his state to enlist in the Union Army after Lincoln's call for volunteers. Captain Hawley received special commendation for his service at Manassas. He then returned home to help raise a new regiment, the Seventh Connecticut, and as lieutenant colonel served under Colonel Alfred Howe Terry. Hawley rose rapidly in rank owing to his dynamic leadership, tactical abilities, courage, deep personal concern for his men, but also significant political support.

He served in nineteen engagements with his regiment and other units. On 20 Jan. 1862, Terry was promoted to general and Hawley took command of the Seventh, which eventually came to be known as "Hawley's Regiment." The unit served in various campaigns on and off the coasts of Georgia and South Carolina, including forts Wagner and Pulaski in 1862 and 1863. Following service at New York during the draft riots of 1863, the Seventh under Colonel Hawley saw stiff action at Olustee in Florida, at Bermuda Hundred in Virginia, and in furious battles around Richmond and Petersburg. By the fall of 1864, he was promoted to brevet brigadier general. Early in 1865, Hawley participated, as Terry's chief of staff, in the capture of Wilmington, N.C. He was then detached to establish a supply depot for Sherman's forces and placed in command of eastern North Carolina.

In addition to providing for some 15,000 released Union prisoners, Hawley energetically prepared his native state for Reconstruction. His impetuousness, however, occasionally led to regrettable incidents. Early in the occupation period, he was angered by the rector of St. James Episcopal Church, Wilmington, who refused to offer prayers for President Lincoln and the Union in lieu of earlier ones for Jefferson Davis. Ignoring the rector's strong theological arguments, Hawley ordered the church cleared and turned into a hospital for the liberated Union prisoners. St. James was subsequently returned to church use after Hawley's departure in the summer of 1865.

Despite intermittent episodes of rashness, Hawley contributed significantly to the rapid revival of the region's turpentine industry, farming, and trade. His attempts to turn plantation lands over to the former slaves largely failed, although some freedmen did continue as freeholders. Extensive educational, relief, and hospital assistance by both General and Mrs. Hawley proved more durable. Years later, at Hawley's death, a North Carolina newspaper observed that, in spite of everything, the general "was never the outspoken enemy" of the South and "was never heard to abuse his mother's people" or North Carolinians.

Mustered out as brevet major general in January 1866, Hawley returned to Hartford. Ever restless and ambitious, he ran successfully for the governorship of his home state. After his defeat for reelection, Hawley did not hold another public office until 1872. In the meantime, he pursued a vigorous Radical Republican editorial policy for the Hartford Courant, which was combined with the Press in 1867. He served as lobbyist for several firms, and spoke frequently on behalf of Radical candidates and causes in all the Northern states. In addition, he strongly encouraged Reconstruction governments and educational programs through a number of friends and admirers in the South.

Although a resident of Hartford's Nook Farm district and a friend of the Charles Warners, Stowes, Beechers, Clemenses, and others, Hawley had little time for extensive socializing. His life was increasingly consumed by the solicitous care of an invalided wife, politics, and journalism. 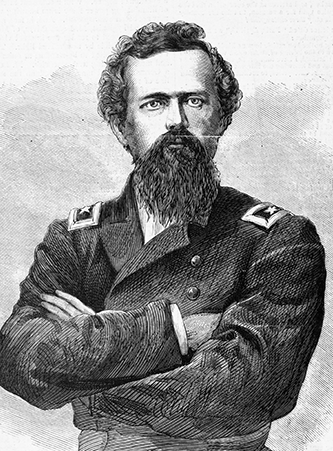 Hawley was president of the Republican National Convention of 1868 and held important party posts in 1872 and 1876. A potent force among the Radicals, he supported Ulysses S. Grant throughout that general's flawed political career. It was at the 1868 meeting that Hawley enunciated his best known contemporary national slogan, "Every bond shall be as sacred as a soldier's grave." This sentiment expressed lifelong, deeply rooted, hard-money fiscal convictions. Although still a social reformer vis-à-vis the freedmen, he increasingly advocated and shaped conservative Republican monetary policies. He also assumed a rather conservative position with respect to the rising power of labor.

In 1871, the rather disreputable but influential Benjamin F. Butler charged that Hawley had been removed from his command during the Civil War because of incompetence and cowardice. An outraged Hawley responded immediately. Calling Butler a "liar and a Blackguard," he stated that, in his last official contact with Butler, the general had approved Hawley's promotion to brigadier general. The charges died out much to the discredit of Butler, and Hawley generally was accorded overwhelming public support.

In November 1872, Hawley was appointed to fill a congressional seat vacated by the death of Julius S. Strong. Six years later he won election to the Forty-sixth Congress (1879–81), and in January 1881 he was sent to the senate, where he served until his death, following reelection in 1887, 1893, and 1899. In 1876, Hawley was named president of the Centennial Commission and presided over its programs with considerable administrative ability, vigor, and eloquence. He also was nominated as a unanimous favorite-son candidate for the presidency in 1872, 1876, and 1880. But Connecticut proved to be an inadequate foundation for this ambition, and Hawley had made many enemies over the years due to his occasional uncompromising positions and his honest, though blunt remarks.

While in the U.S. House of Representatives, Hawley served on important committees such as Claims, Military Affairs, Banking and Currency, and Appropriations. In the U.S. Senate, he became an authority on military affairs, the civil service, railroads, coastal defense, and printing. His work on a special naval committee contributed significantly to U.S. naval preparations before the Spanish-American War, especially in improving military steel production and naval gun manufacture. As chairman of the Civil Service Committee, Hawley was characteristically energetic in furthering civil service reform legislation.

Harriet Ward Foote Hawley, the senator's first wife, died on 3 Mar. 1886. The following year Hawley married English-born Elizabeth Horner. They were the parents of two daughters; in addition, Hawley had adopted a niece of his first wife.

Notwithstanding the turbulence and pressures of his public career, Hawley remained an outstanding proponent of social reform and a popular, generous, warm-hearted figure. Once when Butler mounted a tirade against the Chinese, Hawley stepped forward and in ringing tones reminded his audience of the American ideal of equality and the nation's historic welcome of foreign immigrants. His image as a social reformer of conviction was paralleled by his reputation for integrity at a time when corruption in government was all too common. On one occasion, Mark Twain introduced him as an honest man in the Senate, and quipped that he was also "mighty lonely there." A number of portraits of Hawley have survived.

John Niven, Connecticut for the Union: The Role of the State in the Civil War (1965).

E. P. Parker, "Memorial Address," Joint Report of the Commission on Memorials to . . . Joseph Roswell Hawley to the General Assembly of Connecticut (1915).