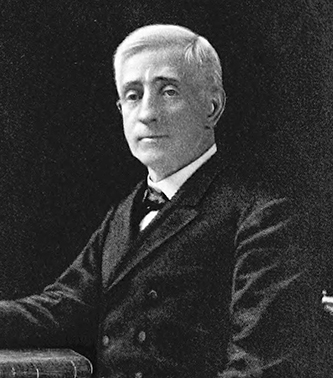 Sylvester Hassell, educator, scholar, and Primitive Baptist preacher, was born and reared in Williamston, Martin County. His father, the Elder Cushing Biggs Hassell, was an esteemed minister of the Primitive Baptist faith. His mother, Mary Davis Hassell, died when he was four. After Cushing Hassell married Martha Maria Jewitt three years later, Sylvester grew fond of his stepmother, and she wielded a strong influence on the young boy's moral life. Though a healthy infant, Hassell in his youth exhibited a tendency to be "frail and delicate."

He was educated at the Williamston Academy and then attended The University of North Carolina from July 1858 to August 1861. Afterwards, he returned to Williamston to assist his father in business. While at Chapel Hill, Hassell consistently achieved first distinction in his class; he was also a member—and, in 1861, president—of the Philanthropic Literary Society. In 1867 the university awarded him the honorary A.M. degree.

At the outbreak of the Civil War, the rather unhealthy young man was examined by Confederate recruiting officers seven times, and each time was exempted on account of afflictions of the lungs and throat. In the winter of 1862, however, Hassell served as secretary to Colonel Samuel Watts of the Martin County militia unit stationed at Fort Hill, near Washington, N.C. At the time of the fall of the Roanoke region, the regiment was disbanded and Hassell returned home. During the remaining years of the war he served primarily as tutor to the younger siblings in the Hassell household. His older brother, Theodore, was a lieutenant in the Seventeenth North Carolina Regiment.

When the war ended, Hassell entered his "chosen profession" of teaching, first as an instructor (1865–68) at the Williamston Academy. In 1869 he moved northward to the State Normal College at Wilmington, Del., where he occupied a chair in the ancient languages. In 1871 he also taught at the William Penn Public School in Newcastle, Del. After the death of his first wife, Hassell returned to North Carolina in 1872 to establish the Wilson Collegiate Institute. He managed the school for fourteen years and, during his final six years there (1880–86), claimed half-ownership. In addition to his duties at the institute, the respected educator was principal of the State Normal School between 1882 and 1884.

For six years after the death of Cushing Biggs Hassell in 1880, Sylvester worked diligently to complete his father's magnum opus, History of the Church of God..., the third major history of the Kehukee Primitive Baptist Association. Upon its publication in 1886, Hassell left Wilson and returned to his old hometown. There he was principal of the Williamston Academy from 1886 until 1890, when failing health forced him to retire from teaching and gave him the opportunity to visit Primitive Baptist churches in several states.

In August 1863, soon after his twenty-first birthday, Hassell had been converted, receiving "the evidence that his sins were forgiven." On 11 Jan. 1864, he was baptized by his father in the Roanoke River, despite the day being so cold that "the ice in the river was more than an inch thick." He began giving public sermons in 1871 and was ordained in 1874. At various times he was pastor for the Skewarkey, Conetoe, Jamesville, Great Swamp, and Hamilton Primitive Baptist churches. After his father's death, Hassell became moderator of the Kehukee Primitive Baptist Association, a position he held for thirty-five years.

In 1892, Hassell became both county examiner for the public school teachers of Martin County and associate editor of The Gospel Messenger, the monthly magazine of the "Primitive Baptist Faith and Order." Six years later he purchased The Gospel Messenger and assumed the editorship, remaining closely associated with the magazine until 1922 when its publication was discontinued.

Hassell was married twice, first to Mary Isabella Yarrell, daughter of Julius and Emeline Yarrell of Martin County, in September 1869. She died in 1871, in her twenty-second year, while the couple was living in Delaware. Their only child, Paul, died in 1886 at age fifteen. Hassell's second wife—whom he married in May 1876—was Frances ("Fannie") Louise Woodard, daughter of Calvin and Winifred Woodard of Wilson County. They had at least five children before her death in 1889: Francis Sylvester, who became a lawyer in Wilson; Charles, who became an auditor; Calvin Woodard, who became an attorney for the U.S. Post Office Department and handled cases of mail fraud; Mary, who furnished a home for her father from the time of her marriage to John Hassell in 1914 until she died in 1923; and Frances Winniefred, who died in infancy shortly after her mother's death.

Hassell was recognized not simply for his role in perpetuating the tenets of the Primitive Baptist faith in his many articles in The Gospel Messenger. He established an academy in North Carolina and aspired to excellence in his diverse teaching positions. An accomplished linguist, he continually expanded his own mind at a time when "most of his fellow-ministers know only the English language and have had very limited educations."

Late in life, Hassell lived with his niece, Mrs. G. W. Hardison, and her family. Despite the frailty of his health throughout life, he lived to be eighty-six. He was buried in the cemetery at Skewarkey Church, near the graves of his father and other loved ones who had preceded him.