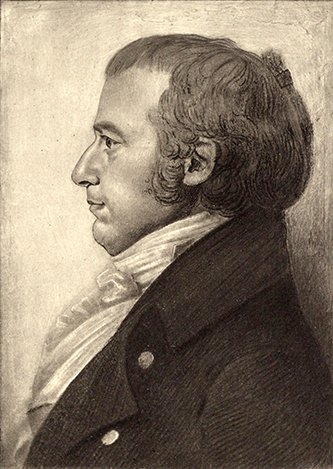 Robert Goodloe Harper, Revolutionary soldier, congressman, and senator, was the son of Jesse and Diana Goodloe Harper. Jesse Harper grew up in Caroline County, Va., and was originally a cabinetmaker by trade. In 1755, he purchased 100 acres of land in St. George Parish, Spotsylvania County, took up residence there soon afterwards, and married Diana Goodloe. In 1768, the Harpers sold their farm in Spotsylvania County and the following year moved to Granville County, N.C., with their four-year-old son Robert Goodloe. His mother taught him to read and write, and at age ten he began attending school in the neighborhood. Harper was fifteen when Lord Cornwallis invaded North Carolina, following the defeat of General Horatio Gates at Camden. Against the wishes of his parents, he left school and joined a volunteer cavalry unit which served under General Nathanael Greene until the enemy had left the state. This military experience had a profound impact on young Harper; he always yearned for a military career and made several attempts to get a "proper" commission.

He spent most of 1783 on a surveying tour in Tennessee and Kentucky, accompanied by John Henderson, where he acquired a taste for land speculation and a habit of indebtedness. The latter plagued him for the rest of his life. After six months of idleness following his surveying venture, Harper was persuaded to attend college and in the summer of 1784, at age nineteen, enrolled at Princeton. Governor Richard Dobbs Spaight of North Carolina advanced him a sum of money, and Princeton President John Witherspoon gave him a teaching position, which enabled him to graduate in September 1785. At this point Harper left North Carolina, never to return except for an occasional visit. Both of his parents died in 1788. Alone and penniless he took up residence in Charleston, S.C., in November 1785.

Aided by former friends at Princeton, Harper found employment teaching in a large grammar school in Charleston owned by a Mr. Thompson. Through Benjamin Hawkins of North Carolina, Harper was introduced to several prominent men in Charleston who provided him the opportunity to study law with Edward Rutledge. One year after his arrival, he was admitted to the bar. In 1787, he began to practice in the small community of Cambridge in Abbeville County, located in the extreme southwestern corner of the state in the district known as Ninety-Six. Although constantly employed, his clients could pay only very small fees or neglected to pay at all. In the fall of 1789 he won a seat in the state legislature, but served only two months in the latter part of the 1794 session.

From 1789 to 1794, Harper's major occupation was land speculation, acting as agent for others as well as for himself while residing in Charleston. In the summer of 1794, he returned to Ninety-Six, where he still owned property, and successfully ran for Congress. Because his term would not begin until the fall of 1795, he went back to Charleston and won the congressional seat for Orangeburg District recently vacated by the death of Alexander Gillon. This enabled him to go to Philadelphia in 1794 where he hoped to dispose of numerous tracts of land while serving out the remainder of Gillon's term. Sour land deals and shaky partners resulted in the accumulation of more indebtedness. Nevertheless, on 9 Feb. 1795 he took his seat in Congress as a representative of the district of Ninety-Six and served until 4 Mar. 1801.

There is still some controversy about Harper's changing political views in 1794–95. He has been accused of being strongly pro-French; in fact, he served as vice-president of the Jacobin Club of Charleston at the time of his election to Congress in 1794. Soon after his arrival in Philadelphia, however, he discovered that the great and powerful men were on the other side of the political fence. He supposedly immediately shifted his position: he supported the Jay Treaty in 1795, favored Adams or Pinckney over Jefferson for the presidency in 1796, and displayed strong pro-British sentiments. In any event, Harper became an ardent Federalist; he was the most frequent and loquacious debater in the party, and served as chairman of the powerful Ways and Means Committee in Congress and as leader of the Southern Federalists. In 1797, his Observations on the Dispute Between the United States and France attracted much attention at home and abroad. His anti-French attitude grew with his importance, and he became belligerent and less tolerant of those who disagreed with him. He was once accused of being the most insolent man in Congress. In 1798, he was one of the strongest supporters of the Alien and Sedition Laws, urged limitation of citizenship to the native-born, and was eager for war with France.

In the meantime, Harper had been introduced to the wealthy and prestigious Carroll family in Maryland and had developed a friendship with James McHenry, the secretary of war, also from Maryland, who urged him to settle there. Despite his reelection to Congress in 1798 by his South Carolina constituents, in July 1799 Harper opened a law office in Baltimore and two years later married Catherine Carroll, daughter of Charles Carroll of Carrollton, over his vigorous opposition. It was Harper's indebtedness rather than his lukewarm Protestantism that Carroll objected to. Harper established a sound reputation as a lawyer and built up a fine estate, Oakland, on the Falls Road in northern Baltimore, which became a social mecca. Charles Warren, in his History of the American Bar, wrote: "The lawyer whose name appears in more cases than any other member of the bar between 1800 and 1825 also came from Maryland—Robert Goodloe Harper—able in mercantile cases, a thorough lawyer and a felicitous and graceful orator."

At the beginning of the War of 1812, he was antiwar and was labeled a "Blue Light Federalist." However, when the British attacked Baltimore in 1814, he commanded troops in the crucial North Point engagement and was given a commission as major general. Harper was elected to the U.S. Senate in March 1815, but did not take his seat until January 1816; he resigned the following December on the ground that business affairs prevented him from serving longer. A Federalist candidate for vice-president in 1816, he received the votes of Delaware electors that year and one electoral vote in 1820. In 1825, Harper decided to reenter politics but died shortly after his announcement that he would run for Congress in the autumn of 1826.

In his last years Harper's greatest interest was the African-American problem. In 1800, he opposed emancipation but favored abolition of the slave trade. Later he became involved in projects calling for the colonization of African-Americans outside the United States. He was one of the original members of the American Colonization Society, and was influential in the selection of Africa as the place and Liberia and Monrovia as names for the colony and its capital.

Harper died suddenly and was given a military funeral in Baltimore. He was originally interred in the family burial ground on his estate, Oakland, but his remains were later moved to Greenwood Cemetery, Baltimore. He was survived by his wife and two children. A portrait of him is owned by the Maryland Historical Society.

U. B. Phillips, "The South Carolina Federalists," American Historical Review 14 (1909).

Harper, Robert Goodloe. "Speech of Robert Goodloe Harper, esq. at the celebration of the recent triumphs of the cause of mankind, in Germany." Alexandria [Va.]: Printed by S.Snowden and F.D. Simms. [1814?]. https://archive.org/details/speechofrobertgo00harp (accessed April 2, 2014).

Harper, Robert Goodloe. Gen. Harper's speech, to the citizens of Baltimore: on the expediency of promoting a connexion between the Ohio, at Pittsburgh, and the waters of the Chesapeake, at Baltimore, by a canal through the District of Columbia. With his reply to some of the objections of Mr. Winchester. Delivered at a meeting, held at the Exchange, on the 20th day of December, 1823. Baltimore [Md.]: Published by Edward J. Coale. 1824. https://archive.org/details/genharpersspeech00harp (accessed April 2, 2014).