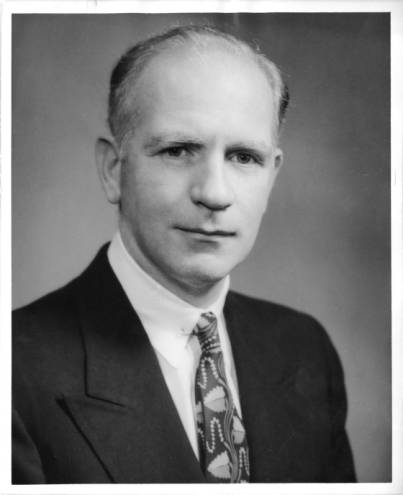 Gordon Gray, public servant, newspaper publisher, radio and television station owner, and university president, was born in Baltimore, Md., the second son of Bowman and Nathalie Fontaine Lyons Gray. In 1912 the Gray family moved to Winston-Salem, N.C., where Gray's father was associated with the R. J. Reynolds Tobacco Company. Later both Gray's father and his older brother, Bowman Gray, Jr., served as chairman of the board of the Reynolds company. One of the most important influences in Gray's life was the presence in the Gray household of Alice S. Gray, a cousin of his father. "Polly" Gray helped raise the two young Gray boys, and she imbued in Gordon a strong sense of the responsibility to serve society's needs, which, she felt, was a concomitant of the wealth and privilege to which he had been born.

Gray was educated in Winston-Salem schools, Woodberry Forest School, and The University of North Carolina, where he was graduated first in his class and president of Phi Beta Kappa in 1930. After obtaining a law degree from Yale University in 1933, he practiced with the firm of Carter, Ledyard and Milburn in New York until 1935. He then returned to Winston-Salem and began a two-year association with the law firm of Manly, Hendren and Womble. In May 1937, as president and publisher of the Piedmont Publishing Company, Gray purchased the Winston-Salem Journal and the Twin City Sentinel. At the same time he bought WSJS, a local radio station.

During this early period of his career, Gray was also active in civic and political organizations. In 1936 he was awarded the Jaycee Distinguished Service Award. He served as president of the Winston-Salem Chamber of Commerce and, in 1938, of the North Carolina Young Democratic Clubs.

Gray served three terms as a state senator, representing Forsyth County in the 1939, 1941, and 1947 legislative sessions. In 1942 he joined the U.S. Army as a private, having declined a commission. He rose through the ranks and ultimately became a captain. His military service included an assignment with General Omar Bradley's Twelfth Army Group in Europe. After his discharge from the army in 1945, Gray returned to Winston-Salem and resumed his career as newspaper publisher and owner of radio stations.

In 1947 Gray was appointed assistant secretary of the army, and shortly thereafter he became an undersecretary. When President Harry S Truman named him secretary of the army in 1949, he became the first secretary who had ever served in the army as a private. He resigned his appointment in the spring of 1950 to accept the presidency of The University of North Carolina. While secretary, Gray represented the army in its negotiations with the President's Committee on Equality and Opportunity in the armed forces. That committee recommended the integration of the races in the armed forces of the United States. In the period between his resignation as secretary of the army and his installation as president of The University of North Carolina on 12 Oct. 1950, Gray served as special assistant to the president on foreign economic policy. The Gray Report, which resulted from this work, recommended continued U.S. aid to Western Europe and increased aid to underdeveloped countries. When Gray was president, The University of North Carolina consisted of The University of North Carolina in Chapel Hill, North Carolina State College in Raleigh, and the Woman's College of The University of North Carolina in Greensboro. Gray reorganized the administrative structure of the university, instituted a Consolidated University Development Program, and was active in formulating athletic policies that raised the standards for participation in intercollegiate athletics. He is credited with being one of the founders of the Atlantic Coast Conference. During his presidency, the Health Affairs Division of the Chapel Hill campus expanded rapidly and the four-year medical, dental, and nursing schools were opened. Gray also helped the university acquire licenses to operate an FM radio station and a statewide educational television network—both on the Chapel Hill campus. Moreover, for the first time black students were admitted to the university, initially into the graduate and professional schools but soon as undergraduates. While at Chapel Hill Gray served as chairman of the National Committee on Financing Hospital Care (1951), member of the board of trustees of the National Committee for Economic Development (1952), and chairman of the Ford Foundation Board on Overseas Training and Research (1952).

In 1951 President Truman appointed Gray director of the Psychological Strategy Board, whose mission was to coordinate the activities of governmental agencies in nonmilitary aspects of the cold war. In 1954 Gray was chairman of the Personnel Security Board to Review the Case of J. Robert Oppenheimer. Gray voted with the majority (in a 2 to 1 vote), which, while affirming belief in Oppenheimer's loyalty, nevertheless denied him the security clearance necessary to serve as a consultant to the Atomic Energy Commission.

In 1955 Gray resigned as president of The University of North Carolina to accept the position of assistant secretary of defense for international security affairs. The following year President Dwight David Eisenhower appointed him director of the Office of Defense Mobilization. From 1958 to 1961, Gray was a special assistant to President Eisenhower on national security affairs.

Upon the election of John F. Kennedy as president in 1960, Gray resigned his governmental position and returned to the Piedmont Publishing Company, where he served as chairman until 1969. From 1969 until 1975 he was chairman of the Triangle Broadcasting Company, and from 1975 until his death he was chairman of Summit Communications, Inc., which owned and operated a number of television stations as well as cable television franchises. Among his other business affiliations, he was a director of R. J. Reynolds Industries, Media General, Inc., and the American Security Trust Company. At the time of his death he was also president of Kensington Orchids, Washington, D.C.

One of Gray's abiding interests was in historic preservation. From 1962 to 1973, he was chairman of the board of trustees of the National Trust for Historic Preservation. Under his leadership that organization grew from 4,000 members in 1962 to 42,000 members in 1973. As president of the National Trust and as a member of the Advisory Council on Historic Preservation (1967–73), Gray frequently testified at congressional hearings to obtain governmental support for historic preservation and the National Park Service.

Gray was a member of the Foreign Intelligence Advisory Board from 1961 until 1977, when the board was dissolved by President Jimmy Carter. He was a trustee of the Brookings Institution and of the Corcoran Gallery of Art, and in 1961 he was chairman of the board of the Research Triangle Foundation in North Carolina.

In 1957 and again in 1961 President Eisenhower awarded Gray the Medal of Freedom, the highest award given to a civilian. In 1971 Gray received the Sylvanus Thayer Award, which is presented by the graduates of the U.S. Military Academy to the citizen whose service to the United States best exemplifies "Duty, Honor and Country." Other awards included the Conservation Service Award from the Department of the Interior (1973), the Medal for Historic Preservation from the Garden Clubs of America (1974), and the Distinguished Alumnus Award (1975) and University Award (1982) from The University of North Carolina.

Gray was a soft-spoken, shy, and serious man, with a quiet sense of humor he revealed only to those close to him. An indefatigable worker, he had a strong dedication to the various causes he espoused. Gray was devoted to his family, with whom he spent most of his leisure time. On 11 June 1938 he married Jane Henderson Boyden Craige. They had four sons, Gordon, Jr., Burton Craige, Clayland Boyden, and Bernard, before her death in 1953. He married Nancy McQuire Beebe on 12 June 1956 and enjoyed his role as stepfather to her three daughters, Cameron, Schuyler, and Alexandra.

Gray was a lifelong member of the Episcopal church and a member of the Democratic party. When he died, funeral services were held at Christ Episcopal Church, Washington, D.C., and St. Paul's Episcopal Church, Winston-Salem. He was buried in Salem Cemetery. A portrait of Gray hangs in the General Administration Building of The University of North Carolina at Chapel Hill.