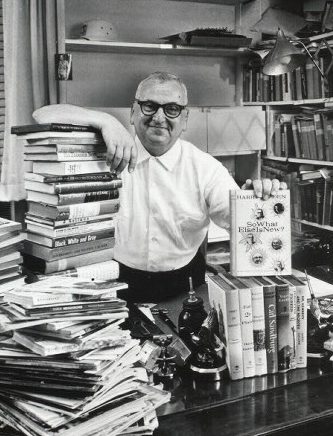 Harry Lewis Golden, author, journalist, and social critic, was born Harry Goldhirsch to a Jewish family in eastern Galicia, then part of the Austro-Hungarian Empire. In 1905 his parents, Leib and Anna Klein Goldhirsch, immigrated to New York City, where they settled on the Lower East Side with other immigrant families. Here, the family name was changed to Goldhurst. Leib Goldhurst became a Hebrew teacher and later editor of the Jewish Daily Forward.

As a youth Golden developed an unquenchable appetite for reading; unabashedly he consumed volumes of literature, history, and social and political philosophy. After he was graduated from public grade school in 1917, he enrolled in the East Side Evening High School and received his diploma three years later. He then attended night classes for three years at City College of New York, but left about 1922 without a degree. Although Golden liked school and excelled in his studies, his education was shaped as profoundly by his participation, from about 1918 to 1923, in the Round Table Literary Club, a discussion group for teenage boys founded by his employer, Oscar Geiger. Under Geiger's influence, Golden became a frequent soapbox speaker for Henry George's single-tax movement and for the Socialist party.

Throughout his boyhood, Golden worked peddling newspapers, manufacturing straw hats, and clerking in Geiger's fur business. After leaving college, he became a stock broker. He first was employed in his sister Clara's firm, but by 1926 he was established independently as head of the firm Kable and Company. In the same year Golden married Genevieve Alice Marie Gallagher (b. 1898), an Irish Catholic schoolteacher. They had four sons, Richard (b. 1927), Harry, Jr., (b. 1927), William (b. 1929), and Peter (1938–57).

In 1929 Golden's brokerage firm declared bankruptcy, and he was jailed for mail fraud. The charge stemmed from his practice of crediting depositors for stock that his company had not bought, and for encouraging them to invest in worthless stock. Golden spent three and a half years in the Atlanta Federal Penitentiary. After his parole in 1933, he returned to New York where he worked in his brother Jacob's hotel. He had resolved, however, to enter the newspaper business. Between 1939 and 1941, he sold advertising for the New York Daily Mirror and the New York Post.

There is conflicting evidence about Golden's employment during the late 1930s. Some sources indicate that he worked for the Charlotte Observer and then the Hendersonville Times-News between 1939 and 1941 before settling permanently in Charlotte. In his autobiography The Right Time, however, Golden does not indicate that he lived or worked in North Carolina before 1941. Early that year he accepted an offer from the Norfolk Times-Advocate to work in sales and advertising. He separated from his family and legally adopted the name Golden to distance himself from his prison record. While in Norfolk he also wrote periodically for the United Mine Workers' publications. This experience, combined with his sales background, brought him an offer from the Charlotte Labor Journal to sell advertising and write editorials. In late 1941, after only eight months in Norfolk, he moved to Charlotte.

It was in Charlotte that Golden's reputation would emerge. While working for the Labor Journal, and later for the Charlotte Observer, he frequently was exposed to the injustices of racial segregation. Piqued by the denial of first-class citizenship to a large but silenced black minority, Golden espoused the civil rights issue, then in its infancy, as a cause worth promoting. He envisioned as his medium a personal journal in newspaper format. His vision materialized in October 1942, when he commissioned the services of the Charlotte News to print the first issue of his paper, which he called the Carolina Israelite. In 1944 Golden assumed the publishing and printing duties and began issuing the Israelite more regularly, usually monthly or bimonthly. In the twenty-four years of publication that followed, this sixteen-page tabloid, comprised exclusively of Golden's essays and of advertisements, acquired an international circulation of 30,000 at the peak of its popularity in the late 1950s and early 1960s. It survived an office fire in 1958 that destroyed Golden's subscription lists, an anonymous revelation later that year of his prison record, and constant criticism from the southern community.

Through the Carolina Israelite, Golden became an unreserved spokesman for civil rights as well as other social and political issues. He addressed subjects heretofore treated obliquely in the South, such as desegregation, unionization, and Jewish-Gentile relations. He was, as Time revealed in its 1 Apr. 1957 issue, a "'member of three minorities'"—a Yankee, a liberal, and a Jew. He survived amid his critics because he made people laugh. His weapon was satire: he needled his way to notoriety when in 1956, in the wake of recent Supreme Court school desegregation decisions, he introduced his "vertical integration" plan, which promised to abolish segregation by removing seats. This solution was drawn from his observation that southerners seemed to object less to standing in public areas with blacks than to sitting down among them.

Aside from political commentary, Golden's essays were filled with anecdotes and seasoned with experiences common in the American culture. He acquired a large and loyal following among a varied audience. Publication of the Carolina Israelite ceased in 1968, however, because of declining subscriptions.

In addition, he was the author of numerous articles published frequently in Nation, Commentary, Life, and Congress Weekly, among others. He covered the Eichmann Trial for Life in 1961. During the early 1960s he syndicated a series of newspaper columns called "Only in America." According to information Golden provided for his entry in the 1959 edition of Current Biography, he also wrote "a million pamphlets and articles for the Zionists, the New Deal, the Socialists, and the Democratic Party," including "'Jews of the South' (1950)" and "Tammany Hall and the Immigrant' (1948)." He frequently spoke before civic and religious groups.

Golden received several awards and commendations, including the L.H.D. from Belmont Abbey College (1962), Johnson C. Smith University (1965), and the University of North Carolina at Charlotte (1977). Named Man of the Year by Carver College (1957), by Johnson C. Smith University (1958), and by the National Federation of Temple Brotherhoods (1959), he received the National Newspaper Publishers Association's Russwurm Award (1958), the Annual Award for Distinguished Journalism from the Joint Defense Appeal of the American Jewish Committee and the Anti-Defamation League (1959), and the North Carolina Award for Literature (1979). In 1969 he was honored by the University of North Carolina at Charlotte with the establishment of a Harry Golden Lecture Series, which sponsored speeches by political liberals from 1971 through 1974. Golden was a member of the American Jewish Congress, the N.A.A.C.P., the Southern Regional Council, the Catholic Interracial Council, and B'nai B'rith. He was buried in Hebrew Cemetery, Charlotte.