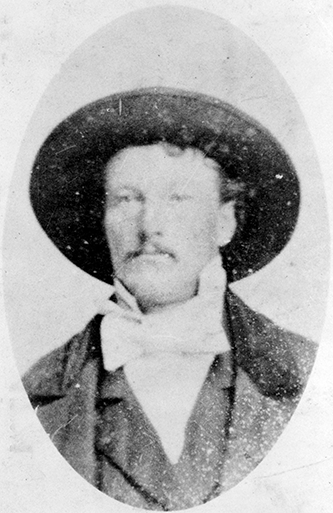 Archibald Campbell Godwin, miner, rancher, and Confederate soldier, was born in Nansemond County, Va., the son of Lewis and Julia Campbell Godwin. His mother was the daughter of General Archibald Campbell, who in 1837 was in charge of U.S. Public Lands of Missouri and the Northwest Territory. In the year of Godwin's birth the family moved to Portsmouth, where young Godwin was reared by his grandmother, Julia Hatton Godwin, after the death of his father. Godwin, who grew to be a well-proportioned six feet six inches tall, left home in 1849 at age nineteen to seek his fortune in the gold fields of California. For many years he was a miner and later branched out into ranching, lumber, and milling businesses. He soon amassed a considerable fortune. At one time he owned a large part of Vancouver Island but gave it up when a boundary dispute between the United States and Great Britain placed the estate inside Canada. In 1860, he came within one vote of winning the Democratic nomination for governor of California.

At the outbreak of the Civil War in 1861, Godwin turned over his property and the greater part of his fortune to two men and hurried east to his native Virginia. Offering his services to President Jefferson Davis, Godwin was commissioned a major in the regular Confederate Army and assigned as assistant provost marshall at Libby Prison in Richmond. So efficient was he in this post that President Davis sent him to North Carolina to organize and construct a prison stockade at Salisbury. With Godwin as its commandant, the prison housed Union prisoners captured in the early battles of the war as well as civil and political enemies of the Confederacy. On 6 July 1862, Godwin organized a regiment of soldiers from the men who guarded the prison. The regiment was commissioned as the Fifty-seventh North Carolina Regiment and Godwin was made its colonel on 17 July. He took his new command to Richmond, where it was attached to General Joseph R. Davis's brigade of General G. W. Smith's division defending the city.

For the rest of the summer and through the autumn of 1862, the regiment was carefully drilled and trained by Colonel Godwin. On 6 November it was sent northward to join General Robert E. Lee's army along the Rapidan River. Attached now to General E. M. Law's brigade of General John B. Hood's division, the regiment took part in the Battle of Fredericksburg on 13 Dec. 1862. In the battle Hood's division occupied the center of Lee's lines, and during the day a sizable Union force was able to gain a position in Hood's front in a railroad cut crossing a small creek. Godwin's regiment, supported by the Fifty-fourth North Carolina, was called on to dislodge the Union force. With parade ground precision, Godwin and his men advanced through a blizzard of bullets and shells and drove the Union soldiers out of the railroad cut. Having no orders to halt at any given point, they pressed on some distance beyond the railroad toward the main Union lines. When an order came from General Law to return to the railroad, Godwin had his regiment break off the action and move back—again with parade ground precision despite the fact that heavy musketry and artillery fire was being poured on the regiment. Godwin held his advanced position at the railroad until darkness ended the battle. The twenty-five minutes it had taken to dislodge the Union soldiers from the railroad cut had cost the regiment 250 of its 800 men, but it had gained Godwin a reputation as a hard fighter, as well as the compliments of both General Hood and General Lee.

In April 1863 Godwin and the regiment were assigned to Hoke's brigade in the division of General Jubal Early. The following month, in the Chancellorsville campaign, they fought again at Fredericksburg where Godwin was slightly wounded. In the Gettysburg campaign, he and his men served in the second Battle of Winchester and made up the extreme left of the final Confederate charge on the first day of the Battle of Gettysburg (1-3 July 1863). On the second day of the latter battle, Hoke's brigade, now led by Colonel Issac Avery, participated in the attack on the Union position known as Cemetery Hill. Early in the action Colonel Avery was mortally wounded and the command of the brigade fell to Godwin as senior colonel. He led the brigade for the remainder of the battle and in the retreat back to Virginia. In October Godwin's brigade took part in the Bristoe Station campaign. When Lee's army took position along the line of the Rappahannock River, Godwin's brigade and General H. T. Hays's Louisiana brigade were sent to the enemy's side of the river to occupy a series of light earthworks that blocked the enemy's approach to a bridge over the river known as Rappahannock Bridge. On 7 Nov. 1863, Union forces attacked the bridgehead in overwhelming strength. Hays's brigade soon gave way and Union soldiers poured into the works, cutting off Godwin's escape route via the bridge back to the opposite bank where the rest of the army remained. Darkness had fallen and confusion was complete. Godwin's brigade disintegrated, as most of its soldiers were either killed, wounded, captured, or lost in the darkness. With a handful of only sixty or seventy men, however, Godwin continued to resist even though Union soldiers swarmed down on all sides. Suddenly from somewhere in the ranks someone shouted that Godwin had given an order to surrender. Furious, Godwin called for the man, threatening to blow his brains out if he found him. The thought of surrender had never entered Godwin's mind; when Union soldiers finally overpowered the little group, he was captured with his weapons still in his hands. Godwin and most of his men were then hustled to a military prison in the North.

For the remainder of the winter and spring, Godwin was incarcerated at the infamous Johnson's Island prison. Meanwhile, his division commander, General Early, had been asking that a special effort be made to have Godwin exchanged. The exchange was accomplished in the summer of 1864, and Godwin soon rejoined his brigade, now a mere 800 strong, which was serving with Early's army in the Shenandoah Valley. On 9 Aug. 1864 Godwin was promoted to brigadier general (to rank from 5 August), and on 19 September he led his brigade in what became the third Battle of Winchester. After much heavy fighting there was a lull in the battle, and Godwin rode out to inspect his lines. While speaking with Captain John Beard, who now commanded Godwin's old regiment, the Fifty-seventh North Carolina, a Union artillery shell exploded directly overhead. A fragment struck Godwin in the head, killing him instantly as he fell into the arms of Captain Beard. As a soldier and leader, Godwin was esteemed by superiors and subordinates alike. He was buried in the Stonewall Jackson Cemetery at Winchester.

John W. Moore, Roster of North Carolina Troops in the War between the States (1882).

War of the Rebellion: Official Records of Union and Confederate Armies, vols. 1, 2 (1885).