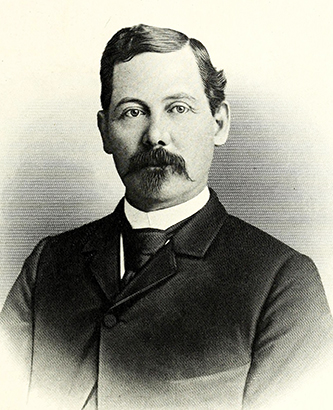 Ephraim Lash Gaither, lawyer and businessman, was born in Mocksville, the son of Ephraim and Sarah Hall Johnston Gaither. He was a descendant of John Gaither, who came from England and settled at Jamestown, Va., in 1621. Subsequent descendants lived in Anne Arundel County, Md. The first of the line to move to North Carolina were Burgess Gaither, who settled in what is now Iredell County, and his brother, Basil, who settled in the part of Rowan County that later became Davie County.

Gaither bore his father's name and that of Israel G. Lash, a close friend of his father. He had three brothers and three sisters. His early education was provided by private schools in Mocksville; among his teachers were Mrs. Andy Brown, Mary Jane Clement, Robert Knox, Pinkney Turner, and, principally, Jacob Eaton, whom Gaither credited with preparing him for college. An incident of his early days was the Battle of Lisha Creek. When he was a lad of fifteen, he joined a hurriedly assembled patrol of "old men and boys" and helped repulse a group of "Bushwhackers" later identified as a part of General Stoneman's Federal soldiers headed for Salisbury. That happened in April 1865, a short time after General Lee's surrender ending the Civil War.

After three years at Davidson College, Gaither's education was interrupted by illness in 1871. He returned in the fall of 1872 and was graduated the following year with the degree of bachelor of arts with honors. In September 1873 he enrolled in the private law school at Richmond Hill, in Yadkin County, taught by Chief Justice Richmond M. Pearson. After two years of study, he was admitted to the bar in June 1875, appearing before the supreme court with Chief Justice Pearson presiding. In 1876 he was the commencement orator of the Philanthropic Society at Davidson College.

Gaither practiced law independently in Mocksville for five years before forming a partnership with his father-in-law, John Marshall Clement, in 1881. The firm of Clement and Gaither was dissolved upon the death of Clement in 1886. Throughout his long career, spanning nearly sixty-five years, Gaither built a statewide reputation as a meticulous student of the law who prided himself on hard work and diligent preparation for the many cases he represented in court. Early in his practice, as counsel for several Confederate soldiers and former slaves, he was frequently commended by presiding judges for his handling of the cases. He never sought public office beyond a short term before 1890 as solicitor of the Davie County court, although one time he was recommended for a judicial appointment that went to another. In 1900, Democratic leaders in Davie County proposed him as a candidate for the North Carolina House of Representatives but his health would not permit him to accept. In the business community, however, he was a longime president of the Bank of Davie and a director of the Wachovia Bank and Trust Company, Winston-Salem.

Gaither was a member of the American Bar Association and the North Carolina Bar Association, of which he was president for a term. During World War I he was chairman of the Davie County Board of Defense, and throughout his active years he served on numerous community boards. Like his parents, who had been active in the local Presbyterian church, Gaither became a church leader locally, serving in the presbytery and the general assembly of the church.

Gaither died at his home in Mocksville and was buried in the Clement cemetery.