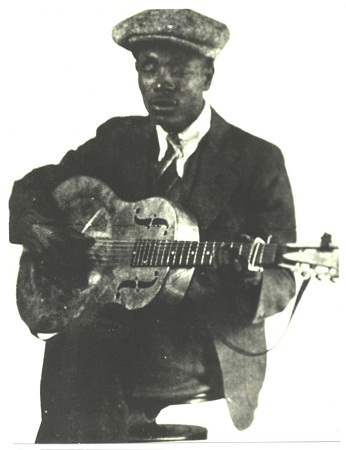 Fulton Allen, better known as African-American blues singer and guitarist Blind Boy Fuller, was born in Wadesboro of poor rural parents, Calvin Allen and Mary Jane Walker. He was one of ten children. His family was not markedly musical, but his sister Ethel was reputedly a fine guitar player. Allen was little interested in playing as a young man and had few musical skills when he began to lose his sight in 1926. He moved the following year to Winston-Salem, where his brother Milton lived. Allen worked as a laborer in a coal yard while living on Vine Street, close to the tobacco factories and warehouses around which he soon began earning a scanty living playing guitar and singing. He lost his vision totally in 1927 and had as his only means of support the occasional income from playing for the migrant work force of the tobacco town. He listened carefully to phonograph records of such popular African-American blues artists as Blind Blake and Big Bill Broonzy and drew skillfully and eclectically from their resources, welding them onto a technically distinctive Carolinas—or Piedmont—style blues to produce his own infectious style, which both characterized the gentle, finger-picked guitar style of the East Coast and gave rise to a whole new generation of younger bluesmen who modelled their own styles upon Fuller's. In this manner he epitomized a gradual evolution in this aspect of black secular music in the 1930s.

Having spent a brief period in Danville, Va., Fuller settled in Durham in 1929. He seldom moved far from there, although he sometimes played at gatherings of seasonal tobacco workers, as in the market area in Raleigh, or at country parties in and around Durham and Orange counties. He had direct influence on only a few friends among younger musicians in and around Durham.

Fuller became the most prolific of all East Coast blues recording artists, and his records sold in large quantities. Through his records the gentle blues of the Piedmont were heard throughout the southern states, and in postwar years the recordings of other musicians from New York to California reflected Fuller's influence. In 1935 he was led to the shop of recording agent J. B. Long, who had already taken "race" artists, as they were called in the phonograph trade of the thirties, to record for the American Recording Company. In July 1935 Fuller made his first trip to New York to record in the company of Blind Gary Davis, from whom he learned much of his guitar-playing proficiency. Further trips to record took Fuller to Columbia, S.C., Memphis, and Chicago. On many of his recordings he was accompanied by his own guitar only, but on some he used a blind harmonica player, Sonny Terry, and sometimes a washboard player named George Washington, both from Durham, or guitarist Floyd Council from nearby Chapel Hill. All of his secular material was released under the name Blind Boy Fuller, although some religious songs were issued as by Brother George and his Sanctified Singers. His success was such that he had recorded 135 numbers by the time of his last session in June 1940.

As least as early as 1937 he was suffering from serious kidney trouble, and a doctor's report for the welfare department showed that the restoration of his vision was impossible. Despite increasingly serious illness, there was no evident decline in Fuller's recording talents, and certainly not in his output. He moved to live on Massey Avenue close to the hospital, to which he made frequent trips. Nevertheless, he was still recording within eight months of his death. He died in Durham and was buried there at Grove Hill Cemetery.

He was married in 1926 to Cora Mae Martin in Bennettsville, S.C. There were no children.

I was wondering if there is

I was wondering if there is any information on his siblings

I am doing a project on Mr.

I am doing a project on Mr. Allen and was wondering if there is any information on any of his siblings like perhaps names?