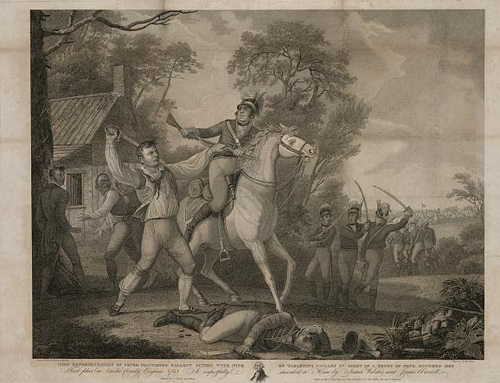 Peter Francisco, "giant" and Revolutionary War hero, was brought to America as a small child. He was landed at City Point (later Hopewell), Va., from a ship, presumably Spanish or Portuguese, in 1765, and was subsequently indentured to Judge Anthony Winston, of Buckingham County, an uncle of Patrick Henry. Francisco grew up on the Winston plantation, Hunting Towers, and early showed signs of his future physical size and strength. At about the age of sixteen, he was reported to be over six feet in height and over two hundred pounds in weight. Although a favorite of Judge Winston (some accounts say he was legally adopted), he apparently received very little if any education.

In 1776, he enlisted as a private in the Tenth Virginia Regiment of Continental Troops, and joined Washington's army in the north. He fought at Brandywine, Germantown, and Monmouth, and took part in the storming of Stony Point in 1778 when he was severely wounded. He attracted the attention of General Washington, who ordered that an especially large sword be made for Francisco, who by this time was becoming known as the "Virginia Giant" because of his large size and extraordinary strength. After his three-year enlistment was up in 1779, he returned to Virginia briefly but soon reenlisted. This time he joined the forces of General Horatio Gates, who was on his way to South Carolina and the disastrous Battle of Camden. At Camden, Francisco distinguished himself by killing several British soldiers, and by single-handedly moving a cannon from one part of the battlefield to another.

Francisco's North Carolina connections largely relate to the Battle of Guilford Court House in March 1781. His courage and prowess there were later honored when a monument was erected to him on the battlefield. The inscription on the monument notes that it marks the site where "Peter Francisco, a giant of incredible strength, killed eleven British soldiers with his own broad sword, and although badly wounded by bayonet, made his escape."

After the Revolution, Francisco opened a tavern and general store in Buckingham County, Va. He became a celebrated figure due to his great strength and his Revolutionary War record. Many stories were told of his strength and courage, and visitors often traveled for many miles to see him. In 1811, he was again a hero, this time at a theater fire in Richmond, when he carried several people to safety from the burning building. In 1825, he was in the party that honored General Lafayette on his visit to Richmond, and in the same year he was appointed sergeant at arms in the Virginia legislature. He held this post until his death in Richmond. His funeral was attended by the governor of Virginia and many other prominent Virginians. He was buried in Shockoe Cemetery, Richmond.

Francisco married three times. His first wife was Susannah Anderson, who died in 1790, leaving one son. His second wife was Catherine Brooke, whom he married in 1794; she died in 1821, leaving two sons and two daughters. In 1823, he married a widow, Mrs. Mary Beverly Grymes West, who survived him. His five children were James Anderson, Benjamin, Peter, Susan (Mrs. Edward Pescud), and Catherine (Mrs. Dandridge Spotswood). Among Francisco's North Carolina descendants are families bearing the names of Pescud, Strudwick, Nash, Withers, Albertson, and Gatling. The Virginia Historical Society in Richmond has Francisco's sword, and the North Carolina Museum of History in Raleigh has a razor case presented to him by General Nathanael Greene.

"This representation of Peter Franciscos gallant action with nine of Tarletons cavalry in sight of a troop of four hundred men." Library of Congress: http://www.loc.gov/pictures/item/2012648840/ (accessed August 23, 2013).