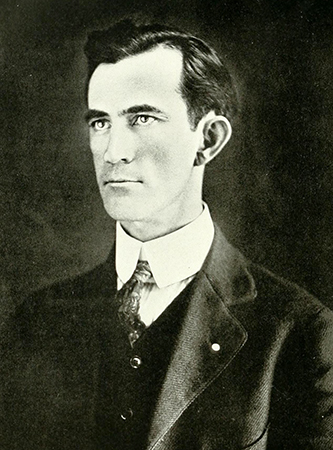 John Hamlin Folger, attorney, state legislator, and U.S. representative, was born in Rockford, the son of Thomas W. and Ada Robertson Folger. Shortly after being graduated from high school in 1898, he entered Guilford College, later transferring to The University of North Carolina law school. In 1901 he was admitted to the bar and for four years practiced in Dobson. Meanwhile, he had married Maude Douglas on 5 Nov. 1899. They eventually had four children: Fred, Nell, Henry, and Frances.

In 1905 Folger moved to Mount Airy where he was to make his home the rest of his life. In addition to practicing law, he came to play an increasing role in Democratic politics and in 1908 was elected to a four-year term as mayor of Mount Airy. After forming a law partnership with his younger brother Alonzo in 1914, Folger's political involvement increased. While Alonzo Folger served as Surry Democratic chairman, John Folger ably assisted him in the task of reviving the weak county party, giving Surry a viable two-party system for the first time in decades and in the process creating a political machine that could deliver sizable blocs of votes to favored candidates in party primaries.

In 1926 Folger won election to the state house of representatives and in 1930 to the senate. In the legislature, education was one of his primary interests. As chairman of the senate committee on education in 1931, Folger helped push the bill for a six-month school term to final passage. From 1927 to 1935 he was a member of the state Board of Equalization and from 1933 to 1937 and 1939 to 1941 he served on the state school commission. A Franklin D. Roosevelt supporter, Folger was a delegate to the 1932 Democratic National Convention and in 1940 led a successful fight at the state convention to elect delegates to the national gathering who favored drafting Roosevelt for a third term.

On 14 June 1941, Folger won a special election in the Fifth Congressional District to fill the unexpired term of his deceased brother Alonzo. Reelected to the Seventy-eighth, Seventy-ninth, and Eightieth congresses, he established a record of strong support for presidents Franklin D. Roosevelt and Harry S Truman. In 1941 he supported such preparedness policies as extension of the peacetime draft and repeal of the neutrality acts, declaring in a speech on 12 Nov. that Adolf Hitler had to be stopped.

In the area of domestic policy Folger proved to be perhaps the most liberal member of the North Carolina delegation and one of the most liberal Southern Democrats. In 1942 and 1944 he supported measures to make it easier for soldiers to vote. An advocate of organized labor, he was one of few southerners to oppose passage of the Smith-Connally Act in 1943 and the Taft-Hartley Act in 1947. In 1946, Folger was instrumental in the passage of the bill establishing the school lunch program after Negro congressman Adam Clayton Powell offered an amendment that would have cut off funding for segregated school systems. Folger countered with an amendment to ensure that Negro schools would get their fair share of money for the program. Powell accepted it, and the bill passed.

During his last term in Congress, Folger became increasingly critical of the direction of American foreign policy, especially the hard line approach to the Soviet Union. In several speeches he expressed fear of a rebuilt Germany and criticized the growing fashion of extreme anticommunism. To Folger communism and fascism were equally bad, and he feared that U.S. support for repressive right-wing dictatorships would hasten the spread of communism. As a result, he opposed the Truman Doctrine for Greece and Turkey in 1947 and efforts to revive the peacetime draft. He did support the 1948 Marshall Plan, however, because he believed it might help restore democratic life.

In his early campaigns for reelection, Folger faced relatively weak opposition in both primary and general elections. In 1946, however, he was challenged by wealthy industrialist Thurmond Chatham in a contest billed as a showdown between the New Deal and more conservative factions of the North Carolina Democratic party. Chatham attacked him as a lackey of the CIO and ran slightly ahead of him in the first primary. Although Folger won the second primary handily, Chatham's determination to run again in 1948 was probably an important factor in his decision to step down. After he left Congress in 1949, Folger returned to Mount Airy where he practiced law until his retirement in 1959. He died in a nursing home in Clemmons and was buried in Oakdale Cemetery, Mount Airy.