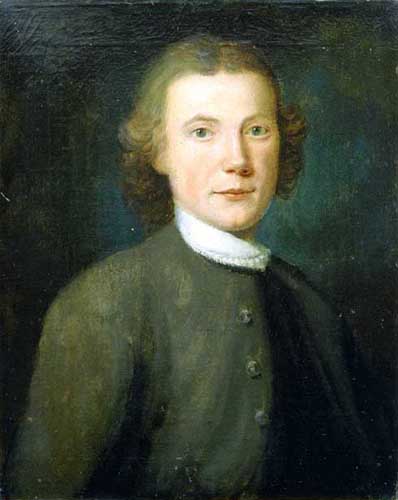 John (Johann) Ettwein, Moravian leader, was born at Freudenstadt in Würtemburg, Germany, the son of Matthias Ettwein (1694–ca. 1755), a local cobbler, and Elizabeth Margaretha Vogler Ettwein (d. 1735), who were descended from French Huguenot and persecuted Austrian Protestant stock, respectively. As the oldest son, young Johann at a very early age was dedicated by his parents to the work of the church, and so they put him through the local Latin school in spite of their poor financial situation. Here he developed a passion for religion, holding the ambition of becoming a martyr. He first came under the influence of the Moravian church at the age of thirteen when missionaries of that sect came into the area to preach in place of the local clergymen, all of whom had recently died in an epidemic that also took the life of his mother. By 1739, he had been converted to the Moravian faith and had begun taking religious instruction at Marienborn, the home of Moravian leader Count Nicholas von Zinzendorf and at that time the center of the Moravian community. Moving up in the church organization, he was selected in 1747 to travel in a missionary party with the Countess Zinzendorf throughout northern Europe and in England.

In 1749, Ettwein was given his first important commission in the church when he was appointed leader of adult programs at the church at Herrnhut; he left the position after six months, however, feeling that he was incapable of handling the heavy responsibility. By the end of the year he was commissioned to a post in London. While in that city he became interested in the Moravian attempts to move into North America. Emigrating there in 1754, he was first placed in charge of the Christian education of children in Bethlehem, Pa. Impressed by the work that had been done in Christianizing the Indians, he soon began missionary trips throughout many of the American colonies.

He was sent in 1758 to Wachovia, the Moravian settlement in North Carolina, as a temporary substitute for its minister Christian Sidel, but the arrangement turned out to be permanent when Sidel died the following year. Here Ettwein began preaching to the Indians again, often letting himself be captured by more hostile Indians so he could minister to them. In this area he also traveled widely, especially among the many German-speaking people of the backcountry of the Carolinas and Georgia. In 1763, he was given responsibility for all Moravian work in North Carolina, and in this capacity was one of the men in charge of selecting and surveying a site for the new settlement that was to be called Salem. In early 1766, he was named as special envoy on religious matters to Governor William Tryon and was North Carolina's delegate to the Moravian Provincial Synod in Pennsylvania. Shortly afterwards he was called to return to Pennsylvania as a special assistant to Bishop Nathaniel Sidel. Over the next two years he visited Wachovia on his travels; thereafter, his work in the church and the Revolutionary War kept him from returning to the area. During this period in Bethlehem came what he felt was his crowning achievement in his attempts to Christianize the Indians when he managed to arrange for the resettlement in the Tuscarawas Valley, Ohio, of the converted Indians of central Pennsylvania.

Because of his warm welcome in England, and because of the special considerations the Moravians were given as an episcopal church by the British colonial government, Ettwein always had a special fondness for the British. As a result, when the American Revolution began he was a strong supporter of the loyalist cause, even to the point of "thanking God in the public services on the occasion of the news of a British victory." For his outspoken activities he was arrested in Northampton County, Pa., and was imprisoned for a while at Easton. After concluding that the war was a political matter in which the church should not involve itself, he was released and became a special envoy of the church to the new American government. He negotiated with the Continental Congress when the Moravians refused to serve in the Continental Army for religious reasons, winning special consideration for members of his church. He also pleaded the Moravian case on the Pennsylvania Test Acts of 1777 before that state legislature, winning an exemption from the test oath for all Moravians. In addition, in 1776–77 he acted as chaplain at the Continental Army hospital in Bethlehem.

During the war much of the Moravian missionary work had been disrupted or destroyed. At times restrictions on the missionaries had been tight for fear that some were British spies, and the Indians of the Tuscarawas Valley had been massacred by militiamen. On 25 June 1784, Ettwein was consecrated as bishop of all Moravians in North America, succeeding Nathaniel Sidel, and in that capacity assumed the burden of rebuilding the work of the church. He managed to get Congress and the Pennsylvania legislature to set aside land for the Indians whom the Moravians were Christianizing, and in 1787 he revived and personally led the Society of the Brethren for the Propagation of the Gospel among the Heathens. As bishop his extensive travels continued; he even returned to Germany in 1788–89 for the General Synod of the governing board at Herrnhut, which had become the headquarters of the church. He led the North American branch of the church until 1801, when he had to step down because of failing health.

In 1746 Ettwein married Johannetta Maria Kymbel (26 Sept. 1725–8 Sept. 1789), who traveled and worked closely with him throughout his career. They had six children: Anna Benigna (1749–1834), Christian (1752–98), Anna Johanna (died in infancy), John (1758–77), Jacob (1760–98), and Maria Magdelena (1765–1803). His personal life was marred by tragedy. He had to leave his infant daughter behind when he was moved to London and did not see her again until she was forty years old. He grieved at the early deaths of two sons, of whom John had hoped to follow his father into the ministry. Probably the most devastating of all, however, was his son Jacob's expulsion from the church for marrying a woman who ridiculed Moravian teachings. He died in Bethlehem, Pa., where he was buried beside his comrade Nathaniel Sidel.

Kenneth G. Hamilton, John Ettwein and the Moravian Church in the Revolutionary Period (1940), and ed., The Papers of John Ettwein (1940).