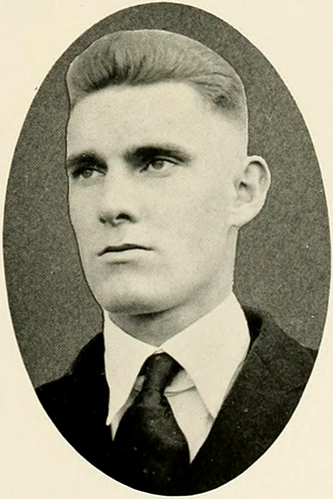 William Clement Eaton, historian, was born in Winston, the son of Benjamin and Mary Gaston Hough Eaton. His father, born in Davie County in 1859 and educated at The University of North Carolina, was a prominent citizen of Winston and served as its mayor from 1900 to around 1914. His mother was a native of Lancaster, S.C. Eaton was one of eight children. Charles Eaton, the poet, is his brother.

At the age of fifteen, Eaton entered The University of North Carolina where he majored in English, was a member of the Golden Fleece, and was elected to Phi Beta Kappa, of which he was president. At the university he counted among his friends Thomas Wolfe, Paul Green, Luther Hodges, and Albert Coates. He received an A.B. degree in 1919, and in the following year was awarded an A.M. in history. In 1920 he entered Harvard University to continue graduate work in history and in 1929 received the Ph.D. While at Harvard he was awarded the Edwin Austin Fellowship and the Sheldon Travelling Fellowship, the latter enabling him to study at Cambridge University. In 1923–24 he was an assistant professor of American history at Whitman College in Walla Walla, Wash.

For the academic year 1929–30 Eaton was assistant professor at Clark University. Moving to Lafayette College as associate professor in 1930, he was promoted to professor in 1933 and became head of the history department, a position he held until 1946. In that year he went to the University of Kentucky as professor of history. There he was named Distinguished Professor in 1956 and Hallam Professor in 1961. He retired in 1970.

An authority on the history of the South and an acknowledged leader in his field, Eaton produced a number of major works, beginning with Freedom of Thought in the Old South (1940). This book, published by the Duke University Press, received the Press's Centennial Award in 1939. It was followed by A History of the Old South (1949), A History of the Southern Confederacy (1954), Henry Clay and the Art of American Politics (1957), The Growth of Southern Civilization (1961), The Mind of the Old South (1964), and The Waning of the Old South Civilization, 1860–1880 (1969). The Leaven of Democracy (1963), which he edited, is an anthology of sources with an essay on Jacksonian democracy. The Civilization of the Old South (1968) edited by Albert Kirwan, is a selection from Eaton's major works and contains a useful introduction by the editor. Eaton also wrote a number of articles appearing in leading historical journals, and contributed to the Dictionary of American History (1976–78) and The Encyclopedia of Southern History (1978).

His writings have been praised for their comprehensiveness, objectivity, and judicious evaluation. But not all of his works met with unqualified praise. Fletcher Green, for instance, in reviewing The Mind of the Old South, wrote, "This is an excellent study, well worth reading, but it has one major weakness: each chapter stands alone, and the book lacks unity."

One scholar has described Eaton as a true gentleman and a great historian who wrote with a sure hand for interpretation. He was chosen as one of twenty-eight outstanding American historians to be interviewed for the Columbia Oral History Collection, which holds the record of that interview. The transcript of the interview is in the Columbia University Library's manuscript collection. The University of Kentucky Library has two major segments of Eaton's manuscripts.

Eaton was a Democrat and a liberal. As president of the Southern Historical Association in 1961, he led the fight to ensure that black members of the association would receive accommodations equal to those of white members. The biographical information in Who's Who in America concludes with his statement: "My goal of self-development is to realize the ideal of Renaissance Man in an American Culture."

He and his wife, the former Mary Elizabeth Allis, were the parents of three children: Allis (Mrs. Henry Bennett), William Clement, Jr., and Clifton Packer.

Fletcher Green, rev. of The Mind of the Old South, in American Historical Review 70 (1965).

Albert D. Kirwan, "Introduction," The Civilization of the Old South (1968).