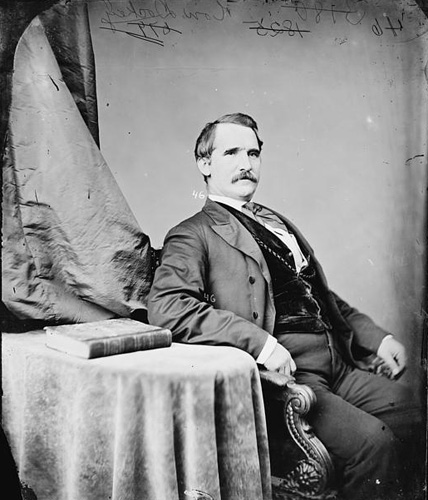 Oliver Hart Dockery, congressman and diplomat, was born in Richmond County, the son of "General" Alfred Dockery, at that time a private citizen, and Sallie Turner Dockery. He was probably the first of his family to attend college, graduating in 1848 from The University of North Carolina where he was a member of the Dialectic Society. John H. Wheeler states that, although he was a qualified lawyer, Dockery never chose to practice. He farmed until 1858, when he was elected to the North Carolina House of Commons for one term.

Like his father, Oliver believed in the Union. He supported John Bell of Tennessee for president in 1860, as did a plurality of North Carolinians, and was an elector on the Bell ticket. With the coming of war, he entered the Confederate Army as a captain and later earned the rank of lieutenant colonel. His son Claudius was born just before the war ended.

Again in the pattern of his father, Dockery served the postwar government of North Carolina. A Republican, he was elected to fill an unexpired congressional term in 1867. He was reelected a year later but failed to win a second full term in 1870. Returning to his farm, he remained in private life until selected as a delegate to the important Constitutional Convention of 1875. This convention modified the 1868 constitution to suit the Democratic party, so it is probable that Dockery was in the minority opposing these changes.

Dockery ran for Congress again in 1882, but lost to Risdon T. Bennett. He was also an unsuccessful candidate for governor in 1888. That year Benjamin Harrison, a Republican, was elected president and subsequently appointed the former congressman consul general in Rio de Janeiro, Brazil. Dockery occupied the post until July 1893. For the remaining thirteen years of his life, he was a farmer. He died in a hospital in Baltimore, Md.

Dockery married Sallie Dumas and had at least two children: Claudius Dockery, who served with him in Brazil and was a longtime University of North Carolina trustee; and Oliver Hart Dockery, Jr., who became adjutant general of the U.S. Army, serving in Washington, D.C., in the early years of the twentieth century. His army career covered the years from 1898 to 1924 and he held the rank of lieutenant colonel.