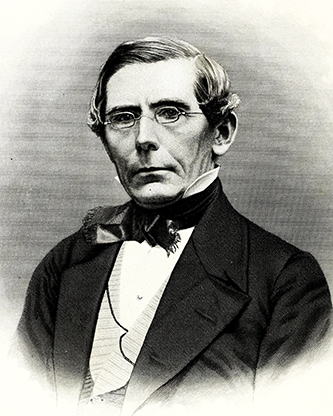 James Henderson Dickson, physician, was the son of James Dickson, a commission merchant of Wilmington. He was not only one of the first physicians of his day but also a man of remarkable intellect. He entered The University of North Carolina at age thirteen and was graduated with the class of 1823 at seventeen. Rapidly acquiring the fundamental truths of medicine, Dickson became a student of Dr. Armand J. de Rosset, the oldest physician in Wilmington. Later, he attended lectures at the Medical Department of Columbia College, New York, and was graduated in 1827. He began practicing in South Washington but sometime in 1827 he moved to Fayetteville, where he lived for ten years. During this period he cultivated a talent for surgery and endeavored to perform operations that seldom had been attempted before his day. In 1853 Dickson performed a direct transfusion from the arm of one sister to another, saving the latter's life. His more notable operation, however, was the subcutaneous tenotomy—the correction of a club foot deformity—on his brother, Dr. Robert D. Dickson, in 1835. This was the first tenotomy to be performed in the United States. According to the North Carolina Medical Journal, "Dickson operated many times with a success very little if any less than that now attained by his followers, notwithstanding the great advance made in the appliances for after-treatment." Unfortunately, no records of his cases have been preserved.

Dickson left Fayetteville in 1837 to practice medicine in New York. Four years later he returned to Wilmington at the request of his father, whose health was declining, and in 1842 entered into a copartnership with Dr. Louis J. Poission. At this time he became involved with the medical field statewide. In 1852 he joined the Medical Society of North Carolina, organized in 1849; he was elected president in 1854 and served two terms. Dickson had much influence in the formation of a State Board of Medical Examiners—the first experiment with state medical examinations—and in 1859 became its president. He also spent much time traveling and speaking before medical groups. Although his research was extensive, he found little time to publish his conclusions.

In 1845 Dickson married Margaret Owen, the daughter of General James Owen. Owen was the first president of the Wilmington and Raleigh Railroad and a member of Congress from the Cape Fear district in 1817.

Dickson was known not only as one of the leading physicians of the state, but also as one of the most public-spirited men in Wilmington. He played in the Thalian Association, served on many committees for the city, was an elder in the Presbyterian church, and helped form the Wilmington Library Association. Committees on which he served varied from managing a ball in honor of Henry Clay's visit to Wilmington in 1844 and entertaining Daniel Webster on 8 May 1847 to serving on the building committee of the First Presbyterian Church. When the church burned, Dickson organized another committee to have it rebuilt. In 1860 he and the Honorable George Davis formed a public library. Dickson purchased many books from New York and these selections formed the basis of the Wilmington Library Association. They were kept in the city hall until after the Civil War. Dickson was chosen as first president of the Library Association in 1860.

Politically Dickson was a Whig. During the political agitation that led to the Civil War, he counseled prudence and moderation, favoring the settlement of troubles in a friendly way. After secession, he was not hopeful of success because it divided the South; nevertheless, he aligned himself with the Confederacy.

On 17 Sept. 1862 Dickson reported five cases of yellow fever. After working night and day for five days, he contracted the disease himself and died eleven days after the epidemic began. He was buried in Oakdale Cemetery, Wilmington.