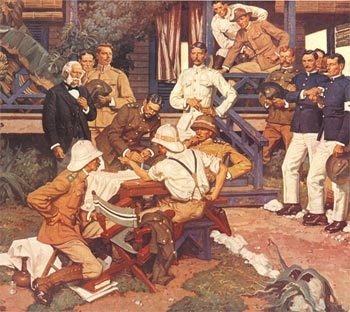 Yellow fever is a harsh, potentially deadly virus that thrives in semitropical locations. This virus was the most feared disease in the United States for generations, earning the nickname the "American plague." In mid-August 1862, Wilmington officials reported an outbreak of the deadly disease in the city, and thousands of panic-stricken citizens fled the area. The epidemic lasted until November, and hundreds of people died. While other southern cities like Charleston and New Orleans suffered frequents outbreaks of yellow fever, Wilmington had not suffered an outbreak since 1821. So, why did it strike in 1862?

When the Civil War started in April 1861, North Carolina was not yet part of the newly formed Confederate States of America. On May 20, however, it left the Union and joined the Confederacy. By the summer of 1862, Wilmington had become one of the most important seaports in the Confederacy because it served as a base for blockade-runners. Many of the runners—which were small, fast ships used to smuggle supplies past the Northern navy—sailed from the Bahamas. One of these blockade-runners was the Kate. Some sources suggest that when the ship landed in Wilmington in July, some of the Kate's crew members were sick with yellow fever. During the epidemic, Wilmington's Daily Journal newspaper published several eyewitness accounts that identify the Kate as the ship that introduced yellow fever into the city. But there is more to the story.

Because Wilmington was such an important city, the Confederate government sent Dr. W. T. Wragg to help. Dr. Wragg was the Confederate doctor most experienced in treating yellow fever. When he arrived, he found a filthy city that had been pounded by heavy rains that left puddles all over the streets. Dr. Wragg believed the filth and stagnant water aided the fever, and he ordered the town cleaned up. Then he set about treating ailing citizens. After the war, Dr. Wragg published an article in the New York Journal of Medicine, claiming that at least five cases of yellow fever were in Wilmington before the Kate arrived in July, and, therefore, the ship's crew was not to blame. He traced the quick spread of the disease to the city's unsanitary conditions, claiming that noxious gases had caused the epidemic.

Many physicians agreed with Dr. Wragg at the time. But Walter Reed discovered in 1900 that mosquitoes, not gases, transmit yellow fever. Because yellow fever could not spring up from gases, it had to be introduced to Wilmington by a third party (and then spread by the city's mosquitoes).

"Conquerers of Yellow Fever." Online with additional information at the Walter Reed Army Institute of Research.