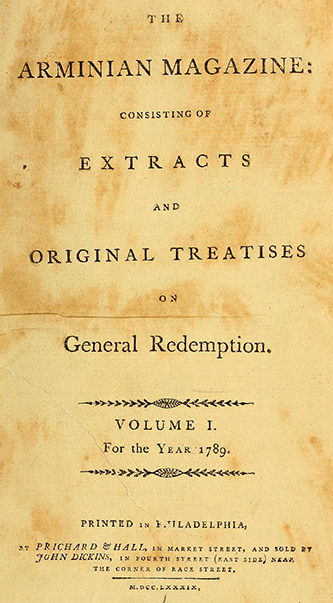 John Dickins, Methodist clergyman and pioneer book agent, was born to John and Elizabeth Aston Dickins in London. Educated there and, according to tradition, at Eton, he became "well acquainted with Latin and Greek and well skilled in mathematical science." Before 1774 he came to America, was converted in Virginia, and in 1777 became a traveling preacher. His first appointment was to North Carolina when in 1780 he was sent to the Roanoke Circuit, a part of which was in North Carolina. He bought 215 acres in the vicinity of Halifax County and made his home on Fishing Creek. There he prepared one of the earliest plans for a Methodist school in America. The funds for its establishment were donated by Gabriel Long and Mr. Bustion—the first money ever given for a Methodist education in this country. About 1793 a Cokesbury school was founded on the Yadkin River in Davie County, but it had a short life.

In 1783 Francis Asbury persuaded Dickins to go to New York and reenter the itinerant ranks. The following year, while a member of the Christmas Conference in Baltimore (24 Dec. 1784–2 Jan. 1785), Dickins gave the name to the newly organized body, "The Methodist-Episcopal Church," and was elected to deacon's orders. In 1785 he was appointed to Bertie Circuit, N.C., and in 1786, doubtless while living in his own home near Halifax, he prepared the first Discipline of the Methodist Episcopal church in its present form. (By 1968 the Discipline had grown to 596 pages.)

In 1786 Dickins returned to New York where he was ordained an elder, stationed at John Street Methodist Church, and became the first book agent or superintendent of the Methodist Book Concern, now the Methodist Publishing House with branches across the nation. The date 1789 in the colophon of the Methodist Publishing House signifies the year in which Dickins was officially designated book steward and began issuing books for the Methodist Episcopal church with his name in the imprint. Philip Cox may have been appointed steward before Dickins; if so, Dickins was soon his superior. As book steward, Dickins published 14,000 copies of books and pamphlets, including Spiritual Catechism, Christian Perfection by Thomas á Kempis, a pocket hymn book of 300 pages, the Arminian Magazine (of which he was also editor, 1789–90), Baxter's Saints' Everlasting Rest, and the Methodist Discipline. Other agents of the early period were Ezekiel Cooper, Joshua Soule, Nathan Bangs, and John Emory.

Dickins married Elizabeth Yancey and they were parents of six children. Asbury, their son, became secretary of the U.S. Senate; Dr. Samuel Baker, a son-in-law, was named professor of materia medica at the University of Maryland in 1809. In Philadelphia, Dickins and daughters Betsy and Elizabeth contracted yellow fever; he died suddenly and was interred in the churchyard of Old St. George's Church (now United Methodist). Dickins's portrait, painted by Charles Hargens, is based on a small woodcut identified for many years as the likeness of Dickins; it is in the possession of the Methodist Publishing House, Nashville, Tenn.

Albert W. Cliffe, The Glory of Our Methodist Heritage (1957).