Gary Davis, a blind black street singer and minister, was born in Laurens, S.C., to a farming family and was raised by his grandmother. As a young man he joined the steady stream of rural blacks who moved into the industrial town of Greenville, S.C. By 1912 he was playing with a string band of some six or eight pieces, which included another guitarist similarly blind from birth, Willie Walker, rated by Davis as the finest guitarist he knew. About 1914 he began attending the South Carolina School for the Blind, in Cedar Springs, Spartanburg; there he taught music although he never learned to read it. In 1919 he married a woman named Mary; they separated in 1924. He spent the next two years in Asheville, N.C., where he was led by banjo player and guitarist, Arron Washington, who later lived in Albany, N.Y. In 1926 Davis arrived in Durham, moving into 410 Poplar, south of Pettigrew Street, in the area of the tobacco factories of Hayti. His mother, Belle, was living there at the time and an uncle resided on Enterprise Street. 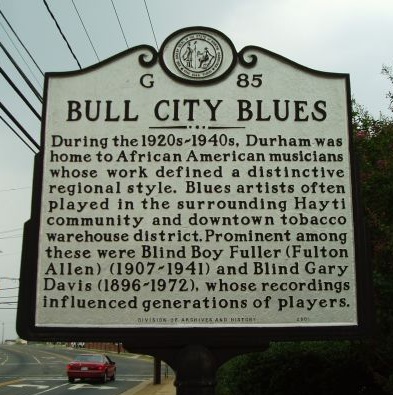 Although Davis had played around Greenville and Spartanburg with such fine musicians as Willie Walker and Blind Simmie Dooley, it was while he was resident in Durham that his influence on other bluesmen became really marked. By his own statement he was ordained a minister in Washington, N.C., in 1933; however, his Durham County Welfare file of 21 July 1937 puts the date much later, quoting his ordination as having taken place "two months ago," which is more probable as he had been on file since December 1934. Moreover, in July 1935 he had recorded in New York under the name Blind Gary—as he was generally known—and the first two numbers of the fifteen that he recorded were secular blues. In view of his later religious "obsession," as one caseworker mentioned, it is unlikely that he would have recorded secular music at that time had he been already ordained. Present at the sessions that he attended was fellow blind guitarist from Durham, Blind Boy Fuller, whom Davis actually seconded on at least one song.

Applying for Aid to the Blind in July 1937 Davis was found to be "hopelessly blind"; his application was accepted and he continued to receive aid until he left the state in 1944. He frequently played at religious meetings, as well as in churches and barber shops and on Pettigrew Street in Durham, near the tobacco factories. Local bluesmen, who remember him playing on the street, testify that he would play blues but only the songs he had recorded. Generally, and certainly later in his career, he played only gospel songs. In July 1939 he was offered a further recording trip to New York, again for the American Record Company, where his friends Blind Boy Fuller and Blind Sonny Terry, a harmonica player recently arrived from Georgia, were recorded. Davis refused the offer as he felt he would not be paid enough. He was to play frequently with Terry when both were in New York some years later. 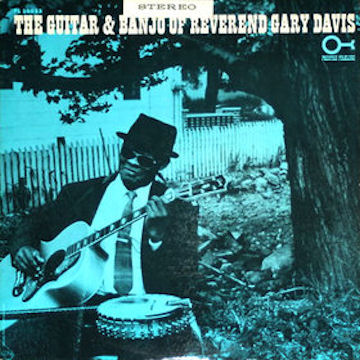 In December 1943 Davis married a Wake County woman by the name of Annie and moved to Raleigh; in January 1944 he left the area for good and went to New York, where he first lived in the Bronx. Apart from a short visit to Durham in February 1948, he did not return to North Carolina again, making his home at last in Jamaica, N.Y.

Davis played in the fast, finger-picked style of Greenville, S.C., which yielded other superb guitarists such as Willie Walker and Josh White. Davis's touch was clean, each note picked carefully with few elisions, and as such, he fitted entirely into the Piedmont style of East Coast bluesmen. Although Davis claimed he didn't sing blues, he certainly played them, even though he called them gospel pieces. With his harsh, angular voice and rhythmic, surprisingly melodic guitar lines, he had all the accoutrements of a bluesman, bar the lyrics. His musical importance was considerable in Durham for he taught Blind Boy Fuller much of his music, especially how to play in the key of A. Local bluesmen who knew both Fuller and Davis corroborate this and many of Davis's guitar characteristics are to be found in Fuller's playing, such as his fast, finger-picked runs and powerful base line. Fuller, in his turn, was to be the most influential bluesman in the southeastern states, and there can be few bluesmen of the late 1930s and 1940s who failed to hear his records. Much of what they heard was really Gary Davis.

Once in New York, Davis became famous as a street singer in Harlem, was accepted into the "folk" set, and, fortunately, was heavily recorded—sometimes with his old friend, Sonny Terry. He played until the day he died and even made journeys to England to appear in concerts when he was well into his seventies. His astonishingly beautiful guitar lines remained unblemished by time.

Davis had no children from his two marriages. His second wife, Annie, outlived him.

Digitized audio recordings of Davis at the Association of Cultural Equity

Recordings of Davis available from the Smithsonian Folkways record label

"Fast Blues in A", a guitar improvisation by Davis at Archive.org.

Both Sides Now Publications. "The Guitar and Banjo of the Reverend Gary Davis." December 11, 2010. Located at http://www.bsnpubs.com/fantasy/folklore/folklore.html. Accessed March 5, 2012.