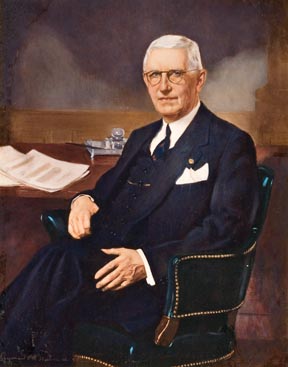 Champion McDowell Davis, railroad official, was the son of Robert Burns, a captain in the Army of Northern Virginia during the Civil War, and Cornelia Nixon Davis, daughter of Nicholas N. Nixon, who established Porter's Neck plantation. He was born near Hickory and was reared on a farm in Catawba County. His family later moved to Wilmington. After receiving a public school education, he began working with the Wilmington and Weldon Railroad, which became a part of the Atlantic Coast Line Railroad Company. He entered the railway service on 1 Mar. 1893 as a messenger boy and retired on 20 June 1957 as president of the Atlantic Coast Line. In his sixty-four years on the job, Davis worked in almost every capacity the railroad had to offer. Before becoming president of the Coast Line on 14 Oct. 1942, while still an executive vice-president, he was named president of four of the Coast Line's subsidiary companies: the Savannah Union Station Company and the Charleston Union Station Company in 1941, and the Tampa Southern Railroad and the Goldsboro Union Station Company early in 1942. He served as either president, vice-president, or director of many of the Coast Line's subsidiary companies. In addition to his duties with the railroad companies, Davis was an officer of several of the Coast Line's affiliates, including terminal companies and land development companies. He was a director of Home Savings Bank, Jefferson Standard Life Insurance Company, Home Insurance Company of New York, and other businesses. He also served as director of a number of national groups such as the Association of American Railroads and the Transportation Association of America. He was director of the United States Chamber of Commerce for two consecutive terms (1949–1952) and a member of the governing board of Nations Business.

Davis's long career was only interrupted by the Spanish-American War in 1898. He enlisted as a private in the Second Regiment of the North Carolina Infantry and in three years served as corporal, first sergeant, and when first lieutenant as adjutant. He resigned as a captain of the North Carolina State Guard in 1901.

Although he severed all ties with the railroad company when he retired in 1957, Davis remained an active member of the Wilmington community. He was a trustee of both Wilmington College (The University of North Carolina at Wilmington) and Cape Fear Technical Institute. On 14 June 1952 the Citadel awarded him an honorary doctorate of science. He was one of the few nongraduates of this college to be so recognized. He belonged to numerous civic and social clubs, both state and national, including Cape Fear Country Club, Carolina Yacht Club, North Carolina Society of the Cincinnati, The Newcomen Society, and the New York Southern Society.

Davis's altruism is probably best reflected by his establishment of the Champion McDowell Davis Charitable Foundation in 1963 and the construction of a nonprofit, nondenominational nursing home for the elderly at Porter's Neck plantation. The home was completed in 1966 and named for his mother, Cornelia Nixon Davis. He was recognized in 1965 for his philanthropy by the North Carolina General Assembly, the New Hanover County Commission, and the city of Wilmington. In 1966 he was presented a plaque from the National Woodmen of the World for his humanitarian services in establishing the nursing home. He was again commended by New Hanover County in 1968 for his work in the advancement of the county and, as a result of his efforts, was selected as the Star-News Newspapers' Citizen of the Year in New Hanover County for 1973.

Davis died at age ninety-five. He was cremated and his ashes spread in the flag pole area at Cornelia Nixon Davis Nursing Home. He never married.