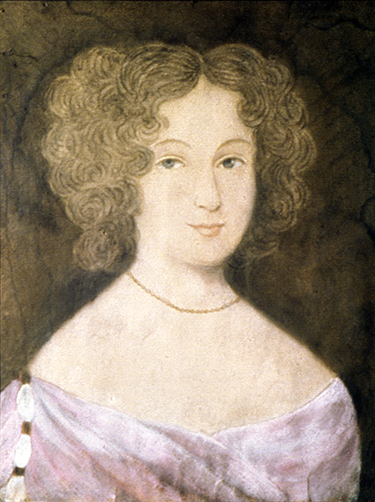 Frances Culpeper, proprietor of North Carolina and wife of three colonial governors, was born at Hollingbourne, Kent, England, the daughter of Thomas Culpeper and his wife, Katherine St. Leger. Her uncle was John, first Lord Culpeper; her brother was John, leader of Culpeper's Rebellion.

The year of her arrival in the New World is not known. She was married in Virginia in 1652 to Samuel Stephens of Warwick County, Va., "Commander of the Southern Plantation" in 1662–64 and governor of Albemarle in 1667–70. Upon his death in 1670, she married, later that same year, Sir William Berkeley, governor of Virginia. As first lady of Virginia, she lived in state. Green Spring, the governor's plantation home near Jamestown, was the first of the splendid James River plantation houses; it was built of brick with a large central hall and staircase, a refinement hitherto unknown in the colonies. A courtier of King Charles and one of the original proprietors of Carolina, Berkeley had been commissioned governor in 1642. His earlier years in office had been happy ones, but by the time of his marriage, his popularity had waned. He became an object of ridicule when, a bachelor of sixty-four, he chose a wife half his age.

Frances, "vigorous and energetic," became his staunch partisan, taking an active part in the political unrest that culminated in Bacon's Rebellion. To show her contempt for the commissioners sent to investigate her husband's activities, she had the "common hangman mounted as an improvised postillion," to conduct the commissioners away from their visit to Green Spring. Berkeley in his will spoke of her as his "dear and most virtuous wife." He died in 1677, deaf, senile, and discredited by his former adherents.

Three years later, Frances wed still another governor, Colonel Philip Ludwell of Rich Neck, a large estate near Green Spring. The year before, Ludwell had been commissioned "Governor of that part of our Province of Carolina that lyes North and east of Cape feare." Thus, for the second time, Frances Culpeper was first lady of North Carolina.

In 1691, both Carolinas were put under Ludwell's jurisdiction, but by then Frances was dead and buried near the old church at Jamestown. Her tombstone reads, "Frances, Lady Berkeley," a title she was loath to relinquish and a choice indicative of her sometimes arbitrary nature.

Because she left no children, Green Spring was eventually inherited by Philip Ludwell, Jr., Colonel Ludwell's son by an earlier marriage. A portrait of Frances as Lady Berkeley, painted in London by an unknown artist, passed from the Ludwell family to the Lees, Ludwell descendants, and is now owned by a Lee in Connecticut.

As legatee of her second husband, Frances became a proprietor of Carolina, and "by a curious combination of circumstances . . . had the good fortune to sell this interest twice, in 1682 and again in 1684, and each time to be paid for it."

Fairfax Harrison, The Proprietors of the Northern Neck (1926).