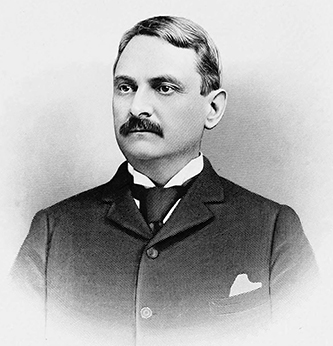 Kerr Craige, attorney, assistant postmaster general, and banker, was the son of Burton and Elizabeth Phifer Erwin Craige. His father was born in Rowan County and represented Salisbury and Rowan County in the House of Commons; he introduced the Ordinance of Secession in the convention of May 1861. His mother was the daughter of Colonel James Erwin of Burke County.

Craige, prepared at Concord Academy and at Catawba College in Newton, entered The University of North Carolina but left at the age of eighteen to join the Confederate Army. He mustered in as sergeant of Company F, Ninth North Carolina State Troops (First Regiment of North Carolina Cavalry). He was transferred to Company I upon appointment as second lieutenant to rank from 1 Oct. 1861. He was promoted to first lieutenant 20 June 1863 and to captain 1 Mar. 1865. During the greater part of the war he served as aide-de-camp to General James B. Gordon. He was captured at Namozine Church, Va., on 3 Apr. 1865 and confined at Johnson's Island in Lake Erie until released after taking the Oath of Allegiance on 18 June 1865.

Following the war, Craige studied law under Judge Richmond Pearson and was admitted to the bar in 1867. In 1870 he was elected reading clerk of the North Carolina house, and in 1872 he was elected a member of the house from Rowan. He served until 1874. Nominated by the Democrats for the town board of Salisbury in 1881, he won the election and was reelected in 1882 and in 1887.

In August 1884 he was nominated for Congress by the Democratic convention of the Seventh District, but he withdrew from the race because of ill health. In 1887 he was appointed by President Cleveland collector of internal revenue for the new Fifth District; he served at Salisbury until March 1889 and then resigned to avoid serving under the next administration. In 1892, through the influence of his law partner, John S. Henderson, then chairman of the Committee on Post Offices in the House, he was appointed third assistant postmaster general. He held the position until 1894 and, in this capacity, was influential in having established out of China Grove the first rural mail route in the state and the second in the nation.

Craige was a prominent banker, and in 1881 he was appointed a director of the North Carolina Railroad.

He was married to Josephine, youngest daughter of General L. O'B. and Nancy Blount Branch of Raleigh, in November 1873. They were the parents of six children, three sons and three daughters. His wife predeceased him, in 1885. He and his family were buried in the Old English Cemetery in Salisbury.