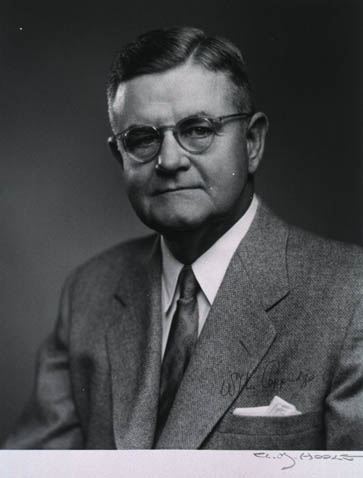 William Maurice Coppridge, physician, teacher, statesman, pioneer urologist in North Carolina, clinical professor of urology at The University of North Carolina School of Medicine in Chapel Hill, and chief of urology and director of clinical laboratories at Watts Hospital in Durham, was born in Danville, Va., the son of William David Coppridge, an insurance man of Danville and Roanoke, Va., and Mary Ellen Ferguson Coppridge of Milton, N.C. He attended public schools in Danville and in Roanoke, when his family moved there in 1910. He entered St. Mary's College in Belmont, N.C., in 1911 and transferred from there in 1913 to The University of North Carolina; in 1916 he enrolled in the then two-year medical department, from which he earned a certificate of satisfactory accomplishment in 1916. He transferred to Jefferson Medical College, Philadelphia, receiving an M.D. degree in 1918 and spending a year of postgraduate work in the Philadelphia Polyclinic Hospital. There he came under the influence of Dr. B. A. Thomas, a distinguished teacher and professor of urology in the University of Pennsylvania School of Medicine. Coppridge's interest in the specialty of urology and in the chemical pathology of urinary tract disease began in this period.

Coppridge returned in 1919 to Chapel Hill, where he was appointed assistant professor of pathology to Dr. James B. Bullitt and, according to Bullitt, was indispensable to the pathology department while Bullitt himself served in the medical corps with the Sixty-fifth General Hospital during World War I. Coppridge also began the organization of a laboratory of clinical pathology in Watts Hospital in Durham. On 2 July 1919, he married the University of North Carolina Infirmary nurse, Ferrie Patterson Choate of Steele Creek, near Charlotte. Early in their married life they lived on Ward K in Watts Hospital, and Mrs. Coppridge was operating room supervisor. Their marriage was without issue but was enriched by the custody of Coppridge's nephews: Dr. Alton James Coppridge, a urologist in Durham, and the Reverend James Wendell Ligon, a Presbyterian minister who was a missionary in Indonesia and afterward a resident of Charlotte.

Coppridge, author of fifty-seven scientific publications, was for forty years a member of the Watts Hospital staff. His interest in improved medical training and better health for all the citizens of the state is reflected in his wise and courageous leadership in the creation of the state Good Health Plan and the development of a four-year medical school and teaching hospital at the university in Chapel Hill.

Coppridge belonged to the Durham Pistol Club, the Democratic party, and the Presbyterian church. He died after four weeks in the New England Baptist Hospital. Funeral services were conducted in the First Presbyterian Church in Durham, and he was buried in Maplewood Cemetery. Ferrie Patterson Choate Coppridge died on 27 Feb. 1974 in Durham.