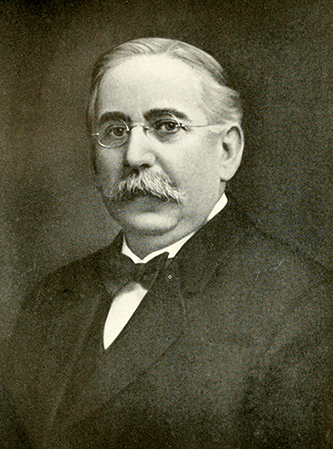 James P. Cook, merchant and legislator, was born at Mt. Pleasant, Cabarrus County, the son of Matthew and Mary Costner Cook. His father (b. 1810) was a native of Baden, Germany, and came to America at the age of twenty, settling first in what is now Gaston County. Until his death at the age of eighty-four, he conducted an expansive mercantile business.

James Cook was educated at Mount Pleasant Collegiate Institute (then called North Carolina College) and was graduated in 1885. For four years he was principal of schools, first in southern Cabarrus County (1885–86), and later at the Boys' High School in Concord (1886–89). He established The Daily Standard in Concord and successfully operated it for six years (1890–96). Concurrently, he served as superintendent of schools for Cabarrus County. When he decided to sell his paper and become a special representative for educational publishers, he resigned as county superintendent but was elected chairman of the Cabarrus County Board of Education, serving from 1896 to 1912.

Cook was elected to the North Carolina Senate in 1913 and served one regular and one special session. During his tenure, his assignments included chairmanship of the important Finance Committee and of the Committee on Education. Governor Locke Craig appointed him to the board of directors of the state-owned North Carolina Railroad.

During his days as editor, Cook had promoted a vigorous attack on the treatment of juveniles in the local courts. That subject became the passion of his life. As editor, private citizen, and legislator, he continued his crusade, with little public approval or encouragement. His first major breakthrough came in 1907, when the legislature authorized promotion of a state reform institution for boys. Cook was appointed to its board by Governor Glenn and was named chairman on 3 Sept. 1907. He served as chairman for many years, and through his leadership and the cooperation of many friends in Cabarrus County, a site was provided, two buildings were erected, and the Stonewall Jackson Manual Training and Industrial School was opened 12 Jan. 1909. Cook and his associates ensured that the school's 120 boys were given good educational opportunities and that the "reformatory" angle was minimized. As untitled head of the school, Cook spent as much time as needed away from his vast and profitable farming interests to serve the institution. What the Stonewall Jackson School has become is a tribute to his work and leadership.

Cook was married to Margaret Jeannette Norfleet of Nansemond County, Va., whose parents were descended from prominent revolutionary and colonial Virginia families. The Cooks had no children but were continuously involved in multiple community affairs in Concord and that entire section of the state. They were active in the St. James Evangelical Lutheran Church; and for many years Cook was a trustee of the Mount Pleasant Collegiate Institute, itself under the aegis of the North Carolina Synod of the Evangelical Lutheran Church.

Cook died in Concord and was buried in a local cemetery.