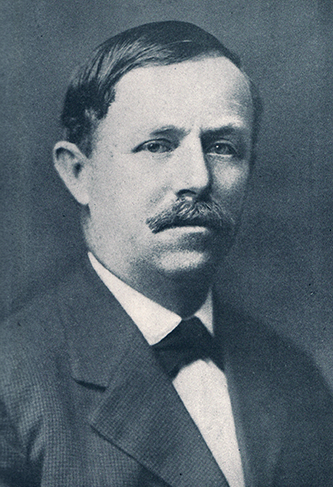 Andrew Jackson Conner, teacher, county and city school superintendent, newspaper publisher, farmer and businessman, was born at Rich Square, Northampton County, the son of Elijah W. and Barbara (Powell) Conner. His ancestors had been important residents of Northampton County for several generations. His grandfather, Joel Conner, born there in 1783, operated a large plantation throughout his life. He had attended college and worked as a teacher and county surveyor. Andrew Jackson Conner's father, Elijah W., also worked as county surveyor for over forty years and farmed as well.

Conner grew up on his father's farm near Rich Square and attended school there until age twenty-one. In 1881 he began teaching at a school in adjoining Bertie County. At the close of the term he took a position at the Grange High School (private) in Lasker, Northampton County, and taught there until 1887. During summer vacations he also taught district school, and this added burden lead to a decline of his health which forced him to give up teaching temporarily. He returned to the school system in 1890 as the county superintendent of public instruction for Northampton County and continued in that position until his appointment as county examiner in 1895, a post newly created under state law. It was in this post that he first gained statewide attention as an educator.

In 1892 he began publishing the Gleaner, a monthly educational journal at Lasker. Three months later the State Grange ceased publication of its weekly paper, the Potecasi (N.C.) Roanoke Patron, and offered the press to Conner on the condition that he begin publishing the Gleaner on a weekly basis. In July 1892 he began publishing the Patron and Gleaner (later named the Lasker Roanoke-Chowan Times ) weekly, and he continued to publish and edit the paper until his death in 1931. At the time of its publication, the Patron and Gleaner was the only newspaper in North Carolina to devote the majority of its space to the promotion of education.

As a school superintendent and then county examiner, Conner made a statewide reputation for himself. In a time when the appointed county examiner was viewed as the only person checking the effects of partisan politics in the schools, he spoke concerning that problem at the Teachers Assembly at Morehead City, June 1896. As the editor and publisher of the only weekly paper in North Carolina devoted to the promotion of public and private education, Conner was noted for his strong editorials supporting schools and for his coverage of school and college news from all over the state. He gave specially strong support to the Woman's College at Greensboro (now The University of North Carolina at Greensboro).

He was appointed a trustee of the Woman's College when it was founded in 1892 and served until his death in 1931. He also served as secretary to the board for twenty-eight years.

On 10 Apr. 1931 the General Assembly appointed Conner to the board of trustees of the newly created Consolidated University of North Carolina. Sadly he died before the first meeting of the Board.

In addition to his activities on behalf of education, Conner, throughout most of his life, owned and operated a thousand-acre farm as well as a cotton gin, a saw mill, and a plant for manufacturing building materials. He served in several county elective positions, as a magistrate and as the food administrator for Northampton County in 1918.

Though Conner claimed that he maintained a non-partisan policy in his newspaper, as was the policy of "friends of education" in North Carolina around the turn of the century, he leaned heavily toward the Democrats in his editorials.

In his paper he supported larger appropriations for schools, local tax for schools, higher qualifications for teachers, free books for students, and an expanded curriculum. He also devoted considerable space to the news of African-American schools and lavishly praised African-American teachers who he thought taught exceptionally well.

Conner married Ella Parker at Lasker, 30 Nov. 1886. He was active in the Methodist church and he founded a Masonic Lodge. He died at Rocky Mount and was buried at Rich Square. Portraits of Conner exist in the Raleigh North Carolinian, 21 May 1896, and in North Carolina: Rebuilding an Ancient Commonwealth.