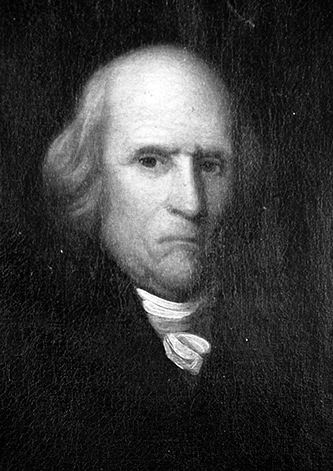 Josiah Collins, Sr., merchant, politician, manufacturer, land speculator, and enslaver was born in Taunton, Somersetshire, England, the son of Joan and David Collins. Little is known of his early life until he married Ann Lewis of Staffordshire in April 1761. The couple produced three children, Josiah II (b. 1763), Ann (b. 1764), and Elizabeth (b. 1769), before Mrs. Collins's death in 1770. Her death became the pivotal point in Collins's life. Leaving the young Elizabeth with relatives, the rest of the family sailed to Boston in 1773. After living in Providence, R.I., for a year, Collins relocated in Halifax, N.C. In 1777, Collins, apparently a nonparticipating Whig during the Revolution, moved to the scene of his success, the port of Edenton.

Collins quickly established himself as one of the foremost merchants of the new state. From 1777 to 1785 he was senior partner in the commercial and shipping firm of Collins, Stewart and Muir, before setting out on his own. He engaged in the export of tobacco, lye, and staves to Europe and the West Indies, in return for sugar, molasses, and rum. A rope manufacturing establishment fell into his hands in 1783; he turned its management over to his son, who built it into one of the nation's finest rope-making industries. Collins's shipping interests spread to the Mediterranean and the Orient. His employees included Captain Edward Preble, of Barbary War fame.

Despite his commercial success, Collins never remarried. His longing for England was demonstrated by a visit there of over a year in 1791–92. Elizabeth Collins never came to America, having married a lawyer named Cook of Hatch, Beauchamp. Josiah II married Ann Rebecca Daves of New Bern, and this union produced Josiah III. The most important marriage was that of Ann to James Blount of Pitt County, which linked two of the most prominent families of late eighteenth- and early nineteenth-century North Carolina.

Collins had lived only a short time in North Carolina before he began to assume various political offices. On 30 July 1779 he was appointed judge of the admiralty court for the Port of Edenton. During the Revolution he served the American cause on commissions for cannon, coast navigation, magazines, and other projects. In 1788 the state senate nominated him unsuccessfully for governor, and in November of that year he became a member of the council of state. He was elected to the same post in 1795. He was also a Federalist delegate to the 1788 Hillsborough convention.

Collins achieved his greatest fame as a land speculator. In 1755 hunters discovered Lake Phelps in Tyrrell County. The land surrounding the lake was deep in "the Great Alligator Dismal" swamp and attracted little interest. Eventually, a company to develop Lake Phelps was formed by W. R. Davie, Allen Jones, Nathaniel Allen, and others. This group received authorization from the legislature in 1784 to drain the seventeen-hundred-acre lake, but, although a preliminary survey was made, the project never materialized. In 1784, Collins entered into a verbal agreement with Allen and Dr. Samuel Dickinson, a minor partner in the enterprise, to acquire and develop land near Lake Phelps. It appears that the partnership, which came to be known as the Lake Company, was intended to coexist rather than compete with the original company; that group died out, however, and the legislature authorized the Lake Company to drain Lake Phelps in 1787. Collins and his partner apparently made no move in that direction. Instead they outfitted a Guineaman, which sailed to Africa to enslave people whose labor would be used for ditchdigging. By 1788 a six-mile-long canal, twenty feet wide, had been completed at a cost of thirty thousand dollars. Through grant and purchase, the company acquired 109, 978 acres between the Scuppernong River and Lake Phelps. The 113 people the company enslaved by 1790 were used to build mills one quarter mile up the canal from the lake, and by 1794 two sawmills, a rice machine, and a gristmill were completed. Besides providing water power for the mills, the canals served for drainage, transportation, and irrigation for the rice culture. Originally producing rice and wheat, the Lake Company soon turned to corn as the primary crop, and the firm also produced lumber, staves, and shingles. The company flourished, owning in 1800 22 enslaved men, 31 enslaved women, and "upwards of 20 boys and girls born in or since the year 1784." In 1816 the early North Carolina historian Hugh Williamson estimated the value of a third share of the Lake Company property at two hundred thousand dollars.

Despite this success, things did not go well for the partners. Allen and Dickinson became increasingly indebted to Collins, and Collins filed a suit of equity in 1794. Although the court ruled that Dickinson owed £4,000 and Allen £50, it did not order a settlement. This decision hastened Collins's desire to buy his partners' holdings, against the advice of such astute friends as Williamson. His task was eased in 1798, when Dickinson "made over to" Francis Peyrinnaut one half of his Lake Company holding. By November 1800, Peyrinnaut's lawyers advertised the sale of his sixth share, and Collins acquired it in early 1800 for $7764.50. After Dickinson's death, Collins in 1800 purchased the remainder of his portion from the estate for $5000. With the purchase of Allen's third in 1816 at a cost of $10,000, the land became Somerset Plantation, now a state historic site.

Collins had, of course, other landholdings besides the Lake Company. He lived and held property in Chowan County. In 1788 he owned 650 acres in what soon became Tennessee, and after 1790 he acquired over 25,000 acres there. Collins's interest in accumulating landholdings far from North Carolina expressed itself in a desire to make a voyage to the "North-West of America" in 1790.

Although he amassed a large personal fortune, Collins was also a philanthropist. He was instrumental in the establishment of the Edenton Academy in 1800 and helped restore St. Paul's Church in Edenton, then dangerously deteriorated. Among bequests of large landholdings and over sixty-five thousand dollars in cash, his will included a thousand dollars for St. Paul's and the same amount for the poor of Chowan County.

In 1805, Collins was the successful defendant in a test case in which the devisees of the Earl Granville attempted to regain the land of the old Granville tract.