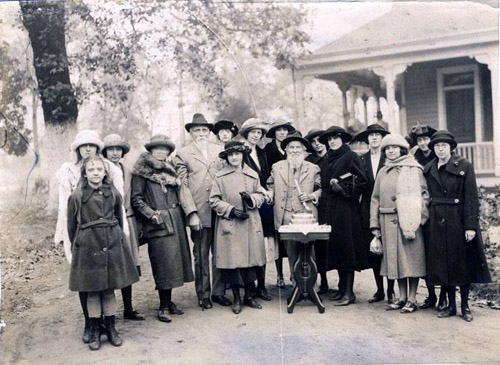 George Leonidas Cathey, school teacher and soldier, was born in Danville, Va., the son of William A. and Jennie Lessly Cathey, who took him at an early age to Iredell County, North Carolina, where George began teaching before the state had established its public school system. He later moved to Georgia, teaching there until he entered service. He was captain of Company C, Georgia Legion, Lisk's Brigade, during the Civil War.

He resumed his teaching career in Georgia following the war, but then moved back to North Carolina, teaching in Swain, Graham, and Macon counties. He retired at the age of 96, and a few years later took up residence in the Confederate Soldiers' Home in Raleigh. On 29 Nov. 1922, two days after his 100th birthday, the North Carolina Teachers Assembly awarded him a certificate of honor and merit in recognition of his record of more than three quarters of a century as a school teacher. He was buried in the Confederate Cemetery in Raleigh.

George L. Cathey was my 3rd