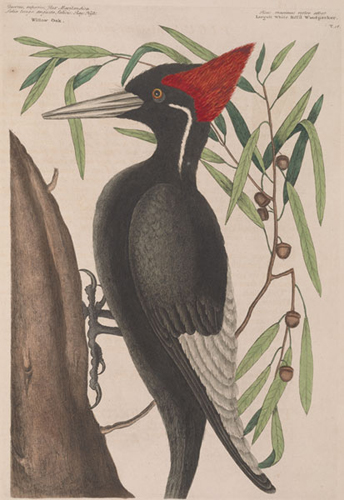 Mark Catesby, naturalist, artist, and author of books on the flora and fauna of Carolina, was born probably in Castle Hedingham, Essex, England, the home of his maternal grandparents. He was the son of Elizabeth Jekyll and John Catesby and may have studied natural science in London. In 1712 he went to Virginia, where his sister and her husband lived; he remained seven years, sending seeds and plants to England. He was on friendly terms with William Byrd who permitted him to consult the manuscript history of the running of the dividing line between Virginia and North Carolina. Catesby traveled widely in Virginia, although the precise places are often in doubt. He went home to England in 1719 but returned to the colonies in 1722, arriving at Charles Town, S.C. He spent the next three years working from a base there. After having stayed for a time in the Bahamas, he returned to England in 1726 and devoted much of the remainder of his life to preparing drawings and the texts for The Natural History of Carolina, Florida, and the Bahama Islands, published in parts between 1731 and 1743, and Hortus Britanno-Americanus; or, A Curious Collection of Trees and Shrubs, published from 1763 to 1767, after his death. He died in London, survived by his wife, Elizabeth Rowland, and two children, Mark and Ann.

There is no evidence to suggest that he was ever in North Carolina, but he pictured and described plants, animals, reptiles, and insects found there. His account of the swallow-tail butterfly took note of Thomas Moffet's "Insectorum . . . Theatrum," for which John White provided a specimen from Roanoke, and Sir Walter Raleigh was mentioned in this connection.

The Natural History of Carolina, Florida, and the Bahama Islands, UNC Libraries: http://www.lib.unc.edu/ncc/catesby/