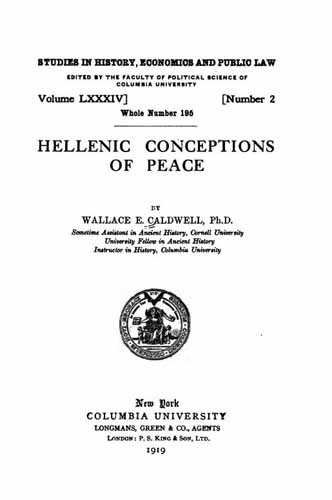 Wallace Everett Caldwell, professor of ancient history at The University of North Carolina and grand master of Masons of North Carolina, was born in Brooklyn, N.Y. His father, Frank Eddy Caldwell, was a medical doctor in Brooklyn, and his mother, Ann Frances Horton Caldwell, was originally from Trumnsburg, N.Y. His ancestors included Colonel Joseph Caldwell of the American Revolution and John Winthrop and Richard Warren, who came to this country on the Mayflower. Wallace Caldwell was graduated from Boys' High School, Brooklyn, in 1906 and received the A.B. degree in 1910 from Cornell University, where he had been the holder of state and university scholarships and had earned membership in Phi Beta Kappa. He attended Columbia University from 1912 to 1915 and was a fellow there in the academic year 1914–15. He was awarded the doctorate in ancient history in 1919.

Caldwell's teaching experience included service as assistant master of the Bethlehem (Pa.) Preparatory School (1910–12), master of the Allen-Stephenson School in New York City (1912–14), instructor in Indiana University (1915–16), teacher in the High School of Commerce in New York City (1916–17), and instructor in Columbia University (1917–21). In 1921–22 he studied at the University of Ghent in Belgium on a C.R.B. Fellowship. In the fall of 1922 he went to The University of North Carolina as an associate professor of history; he was made a professor in 1928 and served as chairman of the department from 1951 to 1953. He taught in the summer of 1924 at Cornell University and in the summer of 1937 at the University of Michigan. At various times he gave courses at North Carolina College at Durham. In 1930–31 he spent the year in Europe on a Kenan Leave, and in 1954, on a Travel and Study Leave, he toured Europe and attended the meeting of the International Federation of Classical Societies at Copenhagen. He retired from full-time teaching in 1961.

Caldwell held membership and was active in a variety of professional organizations, including the American Historical Association, the American Philological Association, the Archaeological Institute of America (vice-president in 1951), the Archaeological Society of North Carolina (president from 1933 to 1936), and the Classical Association of the Middle West and South. He was on the board of editors of Archaeology in 1948. Caldwell published many articles and reviews in learned journals, Masonic publications, and several popular periodicals. His larger publications included his thesis, Hellenic Conceptions of Peace, and a translation of Jean Capart's Thebes, The Glory of a Great Past. The Ancient World, a college level text in ancient history, was published first in 1937 and revised in 1949; further revision was in process, with Dr. M. F. Gyles as coauthor at the time of Caldwell's death. He also wrote, with E. H. Merrill, a high school and popular text, World History (1949), which appeared in several editions. He collaborated wth Dr. W. C. McDermott in selecting and publishing Readings in the History of the Ancient World in 1951. Laudatores Temporis Acti: Studies in Memory of Wallace Everett Caldwell, edited by Mary Frances Gyles and Eugene Wood Davis, was published in 1964 and The Rock: Masonic Addresses by Wallace E. Caldwell, with an introduction by Harold V. B. Voorhis, was published in 1966.

Caldwell was very active in Masonry: he received the Sublime Degree of Master Mason in Mistletoe Lodge No. 647 in Brooklyn in 1913 and became a member of University Lodge No. 408, Chapel Hill, in 1926, serving as master of this lodge in 1939. In 1950 he was installed as grand master of Masons in North Carolina. He was sovereign grand master of the Grand Council for Allied Masonic Degrees of the United States in 1954. He was a Royal Arch and Scottish Rite Mason and a member of the Shrine and the Order of Eastern Star. In 1952 he received the Joseph Montford Medal for meritorious service to Freemasonry, awarded by the Grand Lodge of North Carolina. He also was presented with the Pierpoint Edwards Medal by the Grand Lodge of Connecticut and the Josiah Hayden Drummond Medal by Grand Lodge of Maine, both in 1954. He was awarded honorary membership in a number of North Carolina lodges and was greeted as an honorary grand master of the Grand Lodge of Greece in Athens on 5 Oct. 1954.

Caldwell's other activities included membership in the Sons of the Revolution and in the North Carolina Society of Mayflower Descendants, of which he served as governor from 1942 to 1945. Reared as a Congregationalist in the Plymouth Church of Brooklyn, he was active in the Presbyterian church in Chapel Hill until 1960, when he joined the Community Church. Politically, although he was proud of his support of Theodore Roosevelt in 1912, he maintained an interest in the Democratic party in North Carolina. He was an enthusiastic participant in and follower of sports; the program for the 1962 Atlantic Coast Conference Indoor Track Meet was dedicated to his memory.

Caldwell died in Chapel Hill and was interred at Greenwood Cemetery, Brooklyn. A sculpture head by Arnold Borden has been presented to The University of North Carolina and is in the North Carolina Collection. An oil portrait by Cuthbert Lee is owned by E. E. Caldwell.