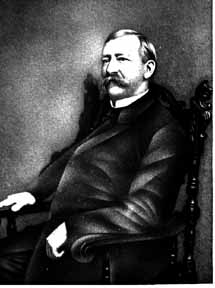 The younger Caldwell, known as J. P. rather than junior, was not a college man, his only degree being an honorary LL.D. from Erskine College in South Carolina. In his boyhood, during the Civil War period, his schooling was in the hands of his older sister Jennie; he did attend some night classes later, but most of his education was acquired in the various newspaper offices where he worked.

At the age of fourteen, Caldwell began work as a printer's devil in the office of the Iredell Express, Statesville's first newspaper, which was published by E. B. Drake. At the end of the Civil War, soon after Caldwell began working there, the paper was renamed the Statesville American. Drake, who had been Whig and then Conservative, turned Republican in 1872, and Charles R. Jones of Williamsburg in north Iredell County set up a rival newspaper, the Statesville Intelligencer, as the Democratic opposition. By raising Caldwell's salary from five to six dollars a week, Jones enticed him away from the American. It was for the Intelligencer that Caldwell began to try his hand at writing, beginning with local news. His next experience was acquired with Colonel Johnstone Jones of the old Charlotte Observer, at thirty dollars a month as city editor. Then Charles R. Jones bought the Observer and gave up the Intelligencer. Caldwell remained with him until 1880, with the exception of a year's interlude as city editor for the Raleigh News. During those years with the Observer he rose to the position of assistant editorial writer.

In January of 1880, Caldwell was able to buy the Statesville Landmark from J. Sherman Ramsey. The Landmark, successor to the Intelligencer, had been established in 1874 by J. B. Hussey and had passed into Ramsey's hands in 1876. Under the guidance of Caldwell, from January 1880 until February 1892, this paper, although only a weekly, was recognized as one of the strongest and ablest newspapers in the state. When Caldwell went home to Statesville, the town was a trading town with a back country of seventeen counties. Before he left in 1892, railroads had been pushed through to Lenoir, Taylorsville, and North Wilkesboro, and those towns had cut into Statesville's trading territory. It became evident to Caldwell and other leaders that the town must turn to manufacturing, and he became a strong advocate of manufacturing as a way of life for Piedmont North Carolina. When he went to Statesville, Caldwell was a conservative, defending the Bourbonism of the Democratic party and using his influence to defeat more than one election for the establishment of a graded school in Statesville. Before he left, he had been converted to the concept of public schools by Charles D. McIver, and Statesville had its graded school. In 1886 the board of aldermen appointed him mayor of Statesville to replace B. F. Long, who had resigned to become district solicitor. In 1887 he was elected to a full two-year term, and he would have had no opposition had he chosen to run in 1889.

The Statesville mayoralty was the only elective office Caldwell ever held. He did hold one appointive political post, that of director of the state hospital at Morganton; he remained in this position until his death and was for some years president of the board of directors. For twenty years he was prominent in the councils of the Democratic party; he was a member of the state Democratic committee and in 1892 was delegate-at-large to the national convention. He was urged unsuccessfully to represent Iredell in the General Assembly, and although there was a movement on foot at one time to name him lieutenant governor, he would not consent.

In January 1892, Caldwell and D. A. Tompkins, an industrialist of Charlotte, bought the Charlotte Chronicle, successor to the weekly Observer. It was not the first time that Caldwell had a chance to return to Charlotte: in 1882 when Charles R. Jones deserted the Democratic party and talked of running for Congress as an independent, an offer to establish Caldwell with an opposition paper in Charlotte had come, but a purse of a thousand dollars from Statesville citizens, which he invested in a new press, kept him with the Landmark. When he left Statesville to take over the Chronicle, he sold half interest in the Landmark to Rufus Reid Clark, who had been his printer, but he continued to contribute to the paper until he sold Clark the other half interest in 1906.

The Chronicle was soon renamed the Observer, and Caldwell, in active management, built it to its present dominant status. As editor, he continued to emphasize manufacturing, as he had begun to do during his latter days with the Landmark. His position brought him into conflict with the Democratic leadership over the question of free silver. In 1896 he grudgingly backed William Jennings Bryan for president while attacking the free silver plank in his platform. In 1900 he refused to back Bryan and made the Observer an independent newspaper, a new concept in the days when all newspapers were supposed to be intensely partisan. Opposition was strong and at times verbally violent, but Caldwell did not budge from his position. He braved the storm and won, giving the press a liberty it had not known.

In June 1877, while working on the old Observer, Caldwell married Maggie Spratt of Charlotte. Three of their five children grew to maturity, two daughters and a son, Frank Caldwell of Charlotte. Maggie Spratt Caldwell died in Statesville in 1893, soon after her husband had bought the Charlotte Observer. Later, Caldwell was married a second time, to Addie Williams of Charlotte; they had one daughter.

Caldwell edited the Observer until 8 Mar. 1909, when he suffered a stroke of paralysis. At his request he was transferred to the state hospital at Morganton. There he died, after two years as a guest of the institution he had served so long.