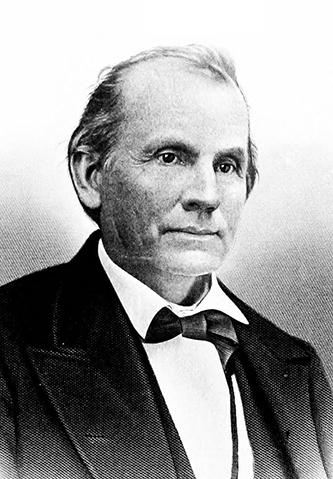 Ralph Potts Buxton, superior court judge, mayor, constitutional convention member, and gubernatorial candidate, was born in Washington, N.C., in 1826, the son of the Reverend Jarvis Buxton, Sr., and brother of the Reverend Jarvis Buxton, Jr. The family moved to Fayetteville in 1832, where Buxton was educated at private academies. In 1845 he was graduated with honors from The University of North Carolina; he taught for one year before moving to Raleigh to read law under John H. Bryan. By 1848 he was pleading cases, and in 1853 he established a law office in Fayetteville. Four years later he was elected mayor of Fayetteville as an Independent, although he favored the Whig philosophy. In 1861 he ran unsuccessfully for the state convention as an antisecessionist candidate. Soon after, however, he was elected solicitor of the Fayetteville Judicial District, a position he held until the end of the war.

At the close of the Civil War, Buxton was aligned with the Republican party through an appointment to the superior court bench by Provisional Governor W. W. Holden. In 1865 he was also elected to the constitutional convention. He was elected superior court judge over Bartholomew Fuller in 1868 and continued to serve in this capacity until 1880.

Throughout Reconstruction, Buxton took both Republican and Democratic views, depending on the issue at hand. As a Republican member of the 1865 constitutional convention, he sided with the Democrats in opposing the repudiation of the war debt. He took the Republican view, however, in his opposition to the Ku Klux Klan in North Carolina. He ran as an Independent for the superior court in 1868 and polled many Democratic votes. Later that same year, however, he was attacked by the Democrats for appointing a Republican carpetbagger of dubious honesty as superior court clerk. The Fayetteville Eagle, a Democratic newspaper, viewed this action as a blight on Buxton's character. Buxton responded with a successful libel suit against the Eagle and soon emerged as a Republican leader in the Upper Cape Fear Valley. Many of the state's Democrats, however, continued to hold him in high esteem.

Buxton was reelected to the superior court in 1874 and one year later was elected to the state convention from Cumberland County. In 1876 the Republican party urged him to accept a nomination to Congress. He refused, saying that he preferred his life as a judge to that of a true politician. This refusal, however, did not lower his status in the North Carolina Republican party. In 1879 he received the complimentary vote of the Republican legislators for the U.S. Senate, and in 1880 he was nominated as the Republican gubernatorial candidate.

Buxton's campaign for governor in 1880 was a strange affair. He accepted the nomination on the grounds of strengthening the state Republican ticket but was not a very enthusiastic campaigner. In his "joint discussions" with Governor Thomas J. Jarvis, the Democratic candidate, Buxton's speeches were virtually the same text, regardless of where he spoke. His Democratic opponents observed that he was a victim of his own party affiliation. Indeed, Buxton's speeches tended merely to echo the state Republican platform: anti-Democratic, pro-Western North Carolina Railroad extension, pro-education, and pro-African-American rights. The issue of African-American rights was the foundation of Buxton's Republicanism: as early as 1844, he had favored the rights of African-Americans to be free. His politics after the war reflected this sentiment: he opposed Southern Bourbonism and Democratic Redemption in North Carolina.

Buxton's Democratic opponents disagreed with his views but admired him as a man of stature. Although he received some of this Democratic backing in the election, he lost to Governor Jarvis, 121,832 to 115,589. It was a much closer election than the Democrats had foreseen and a disappointing loss for the Republicans.

Buxton returned to private practice in Fayetteville, where he became something of a legal mentor. Although the Republican party placed his name in the 1886 election for chief justice of the North Carolina Supreme Court, Buxton did not campaign and lost to Chief Justice W. N. H. Smith. Buxton was named superior court reporter in 1897 and served in that capacity until the day of his death.

Buxton was called a "safe rather than a brilliant jurist," noted for his patience and caution. He was also regarded as a prudent investor. In addition, he was known for a clever but delicate sense of humor. He was associated with several North Carolina literary societies and, a lifelong Episcopalian, was a lay reader and vestryman in St. John's Episcopal Church in Fayetteville.

At his death at the age of seventy-four, he was the oldest member of the Fayetteville bar. He was survived by his wife, Rebecca Bledsoe of Raleigh, whom he had married in Raleigh's Christ Church in 1860. They had no children.

John A. Oates, The Story of Fayetteville and Cumberland County (1950).