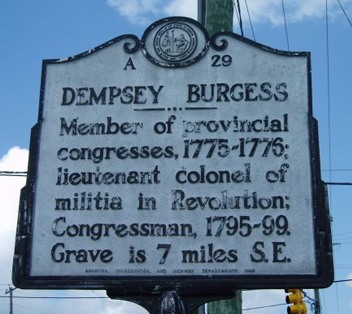 Dempsey Burges (Burgess), Revolutionary War leader and member of Congress, was born near Shiloh in Pasquotank (later Camden) County. His father was John Burges, a farmer and Baptist minister, of English ancestry.

Entering politics at an early age, Burges became a member of the assembly in 1773. In 1775 and 1776 he served in the provincial congresses meeting at Hillsborough and Halifax, representing Pasquotank County. When Camden County was created in 1777, Burges was on the committee appointed to lay out the new court-house and jail. In the provincial congresses he served on various committees, including Ways and Means and the Regulation of Internal Peace, the latter being concerned with the detection and punishment of Tories.

Burges was commissioned a major in the Pasquotank militia in September 1775 and promoted to lieutenant colonel in April 1776. After the war he lived on his farm near Shiloh and remained active in both politics and the affairs of the Baptist church. He was elected a member of the U.S. House of Representatives in 1795 and reelected in 1797.

Burges was buried in the Shiloh Baptist Church cemetery. His wife's maiden name was Sawyer. According to the census of 1790, he may have had as many as two sons and two daughters, and he enslaved thirty people.