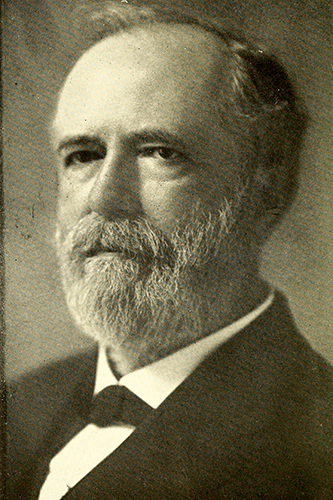 Young Henry attended grammar school during the winter months at his father's school in the Piney Grove district. In March 1864, despite his mother's protests, Brown joined the Fourth North Carolina Battalion, commanded by Major John M. Reese. His company was stationed at Camp Davis on Masonboro Sound below Wilmington, where the company guarded the state salt works and tried to prevent slaves from escaping to the Federal gunboats. There Brown was stricken with malaria and hospitalized. After the bombardment of Fort Fisher in December 1864, the battalion was rushed by rail to Belfield, Va., to repulse a raid on the Weldon, N.C., railroad bridge. After skirmishing near Tarboro, the battalion was returned to Goldsboro and organized into the Third Regiment, North Carolina Reserves. They fought at Kinston and surrendered after retreating to Randolph County.

After the war, Brown worked on his father's farm and taught at the district school. He attended two preparatory schools in Guilford County, one at Center and the other at Monticello, and then entered Wake Forest College in the fall of 1867, as a beneficiary of the Beulah Baptist Association. He was an orator, and served the Euzelian Literary Society as a critic, secretary, and president. At his graduation in 1871 he delivered the salutatorian address, "We Should Take Things as They Are."

Shortly after the Civil War, Brown was converted and baptized in Troublesome Creek, Randolph County, and joined Summerfield Baptist Church. In August 1871, after his college graduation, he was ordained at Yanceyville by a presbytery consisting of Dr. W. M. Wingate and the Reverends F. M. Jones, S. G. Mason, W. S. Fontaine, F. M. Jordan, and P. H. Fontaine.

Soon after his ordination, Brown was engaged by the state mission board of the Baptist State Convention as a missionary in Rockingham, Guilford, Stokes, and Forsyth counties. In later years, Brown related some of his experiences to his biographer: "I had eight or nine appointments to reach each month. This required riding on horseback nearly one hundred and fifty miles per month. I had to ford Dan River four or five times a month. Often it was swollen and I came near having trouble and being in danger on several occasions. I rode a hard-trotting horse which gave me fine exercise."

During his work for the convention, Brown began several missions and churches and assisted other pastors with revivals. The preaching and singing exhausted him and brought on a throat condition that caused him to give up his work for several months. He taught school and, after recovering from his throat condition, accepted the pastorate of the First Baptist Church at Fayetteville. He preached his first sermon there on the second Sunday in September 1874. His reminiscences of this pastorate were published in the North Carolina Baptist in 1903.

During the summer of 1877, Brown's health began to fail, and his mind returned once more to the Piedmont section of the state. The Baptist church in Winston and Red Bank Baptist Church in the northern part of Forsyth County were both without a pastor. The two boards of deacons, without consulting each other, unanimously called Brown to preach at Winston three Sundays a month and at Red Bank one. Brown thus began his forty years of work at the Baptist church in Winston, now the First Baptist Church, Winston-Salem. There were only 50 Baptists in the two towns of Winston and Salem in 1877, but during Brown's pastorate a new house of worship was begun; membership reached 2,739 by the time of his retirement.

Brown was also a leader in the Pilot Mountain Baptist Association. He aided in planning fifty of the sixty-three churches founded during his ministry in the area. He served as chairman and treasurer of the executive committee of the association for nearly twenty-five years and was a regular correspondent and writer for the North Carolina Baptist (Fayetteville) and for the Biblical Recorder (Raleigh). After his retirement in 1917, he was elected pastor emeritus of all the Baptist churches in Winston-Salem. Brown Memorial Baptist Church was named in his honor.

Brown returned to Wake Forest College in 1891 to deliver the alumni address, "What Has a Christian College the Right to Expect of Her Sons?" during commencement. The college granted him the honorary D.D. degree in 1895. He also served as trustee of Wake Forest from 1885 to 1902.

Brown was buried in the Salem Cemetery, Winston-Salem, in a Masonic graveside ceremony.