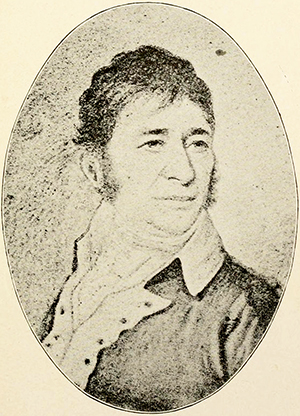 Reading Blount, major in the Continental Army during the American Revolution and an original member of the Society of the Cincinnati, was the third son of Jacob Blount and his wife, Barbara Gray. Jacob, son of the Thomas Blount to whom the Lords Proprietors had granted 266 acres of land in Carolina, became the father of a group of distinguished men. William, one of the founders and first trustees of The University of North Carolina, a signer of the Constitution in Philadelphia, governor and U.S. senator from Tennessee, was the most famous of the Blount brothers. John Gray, who handled the vast Blount interests in shipping, merchandising, and land speculation, became a power in financial and political circles. While his brothers were acquiring great wealth, Reading distinguished himself in the Revolutionary War. Of the Blount brothers, it is said that William was the shrewdest and most ambitious, John Gray the smartest and most levelheaded, Thomas the most charming and lovable, and Reading the most daring and spirited. John Gray and Thomas were for many years trustees of The University of North Carolina, as was John Gray's son, General William Augustus.

Reading was born at Blount Hall, the home of his father, which was located near Contentnea Creek in the New Bern District (now Pitt County). His mother died when he was six, and Jacob was remarried two years later to Hannah Salter. Perhaps five children between the ages of six and fourteen were too overwhelming for a young stepmother; at any rate, Jacob's sons were educated under Thomas Thomlinson, who opened a school in New Bern in 1764.

After news came of Lexington and Concord in 1776, the North Carolina assembly met in Hillsborough and divided the state into military districts. Reading Blount, who was then nineteen and had as his only previous military experience drilling with the local militia, was commissioned a captain in the Third North Carolina Regiment on 16 Apr. 1776. This regiment, which was accepted by Congress on 7 May 1776, was commanded by Colonel Jethro Sumner, whose daughter Mary ("Jackie") married Blount's younger brother Thomas. Captain Blount became a major on 12 May 1778. In June of that year he was transferred to the Fifth North Carolina Continental Line. On 1 Jan. 1781, he was again transferred, this time to the First Continental Line. He served for nearly seven years.

At the Battle of Guilford Court House on 15 Mar. 1781, Blount was cited for bravery. Again at the Battle of Eutaw Springs, on 8 Sept. 1781, he was recognized by General Nathanael Greene for bravery beyond the call of duty. Legend says that through a misunderstanding of orders, a serious gap developed in the line of the Continental troops. Disaster seemed inevitable until the North Carolina battalion commanded by Ashe, Armstrong, and Blount came through with a brilliant maneuver averting catastrophe. General Greene went on record as saying, "I was at a loss which most to admire—the gallantry of the officers or the good conduct of their men."

At the conclusion of the war, Blount returned to Blount Hall and became involved in the mercantile, shipping, land dealing, and other business interests of John Gray and Thomas. He had a brief fling at politics, serving a term in the legislature from Pitt County. For two or three years, he joined Thomas in Tarboro, where a branch of the Blount business was in operation. There he entertained President Washington when he came to Tarboro on his southern tour. But he found that he was not interested in selling sugar and salt, rum and hardware, nor in scouting the area for tobacco, corn, and forest products to ship. He had apparently absorbed the routines of farm, mill, and shop as a boy at Blount Hall, and he wanted primarily to be a planter.

Blount was nearly thirty-seven when he married Lucy Harvey, younger daughter of Colonel Miles Harvey of Perquimans County and granddaughter of Governor Thomas Harvey. Mary, Lucy's older half-sister, was already the wife of John Gray Blount. The wedding of Lucy and Reading took place in the John Gray Blount home in Washington on 4 Feb. 1794. This house, built by John Gray Blount in 1778, was the sixth dwelling in the infant village at the Forks of the Tar and was occupied continuously by the Blount family until 1917. In 1923, "progress" demanded its demolition. John Gray Blount and his brother Bryan owned the Chocowinity Mills, opposite Washington on the Pamlico River, and he referred in deeds to this river location as his residence.

In 1796, Reading Blount bought three hundred acres of farm land on Tranter's Creek a few miles from Washington, on which there was a two-and-a-half-story house that he named "Bellefont." A feature of Bellefont, which is still standing after continuous occupancy for nearly two centuries, is a huge double-pent chimney, nineteen feet in width. This chimney has four fireplaces and four wardrobes constructed inside the chimney, each having an outside window.

This was Blount's home as, surrounded by a growing family, he raised flax and wheat, continued his buying and selling of land, and engaged in extensive operations in the lumber industry. He built another sawmill on Tranter's Creek in addition to the ones he already owned on Broad Creek and Pungo River.

In 1800, Blount was elected by the legislature to be major general of the First Division of Infantry of the state militia.

Blount died at the age of fifty at Bellefont. In Lucy Harvey Blount's Bible is written, "Major Reading Blount, the husband of Lucy and father of her children died October 13, 1807 at 2 o'clock in the morning." Interment was the following day. However, because there was no Episcopal priest in the area, the funeral was not held until two months later. On 8 Dec. 1807, family and friends met in the little burying ground on the south side of the house to read the burial service and give him "the full honors of war."

Seven months after Blount's death, Lucy gave birth to his ninth child, and in February 1818, she was buried beside him at Bellefont. Several of their children are buried in this family cemetery, which is maintained by the Blount Family Society.

Proceedings of the First Meeting of the Society of the Cincinnati (The Society Museum, Washington, D.C.).

Davis, Charles Lukens. A brief history of the North Carolina troops on the Continental establishment : in the War of the Revolution : with a register of officers of the same. Philadelphia, Pa. : [s.n.]. 1896. 30. https://archive.org/stream/briefhistoryofno00davi#page/30/mode/2up (accessed May 28, 2013).