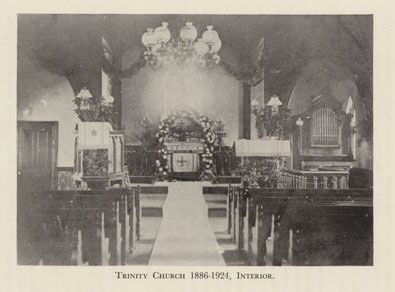 Angelo Ames Benton, Episcopal clergyman and scholar, was born at Canea on the island of Crete. His father, the Reverend George Benton, was serving at the time as an Episcopal missionary in Greece. In 1845 the elder Benton settled in North Carolina and, until he died in 1862, did missionary work at Rockfish in Cumberland County. A. A. Benton was educated at Trinity College, where he received a B.A. in 1856 and an M.A. in 1860. He was ordained deacon by Bishop Thomas Atkinson in 1860 and was assigned to Trinity Church, Scotland Neck, to assist Dr. Joseph Blount Cheshire. In Scotland Neck his specific charge was a chapel erected for the use of the Negroes living on the plantations of parish members on the Roanoke River.

Benton left Scotland Neck in 1861. Having been ordained to the priesthood by Bishop Atkinson in 1863, he ministered to his father's congregation at Rockfish for two years. In 1865 he became rector of St. Timothy's Church in the growing community of Wilson; he is said to have also officiated occasionally in Rocky Mount. From 1872 until 1878 he was rector of St. Paul's Church in Edenton. In the latter year, he returned to Rockfish, where he remained for five years.

In 1883, Benton accepted a post as professor of Greek and Latin at the College of Delaware. He later went to the University of the South at Sewanee, where he was professor of dogmatic theology. His alma mater awarded him a D.D. degree in 1888. Benton remained at Sewanee until 1894. Returning then to the ministerial field, he was rector first of St John's Church, Albion, and then of St. Paul's Church, Pekin, both in the Diocese of Springfield in Illinois. He retired in 1904 and lived at Crafton, Pa., until his death.

Benton was among the first to take an interest in the colonial antecedents of the Episcopal church in North Carolina. From legislative statutes he compiled a list of the old colonial parishes of the Church of England in the state and submitted his findings to the convention of the diocese in 1874. The result of his researches was printed in the convention journal of that year. Later Benton compiled The Church Encyclopedia, first published in New York in 1883. It was popular in its day, and successive editions were published in Philadelphia in 1884, 1885, and 1886. In 1890 he prepared an edition of the works of Virgil for use in schools.

Haywood, Marshall De Lancey. Lives of the bishops of North Carolina from the establishment of the episcopate in that state down to the division of the diocese. Raleigh, N.C. : Alfred Williams & Company. 1910. https://archive.org/details/livesofbishopsof00hayw (accessed April 9, 2013).