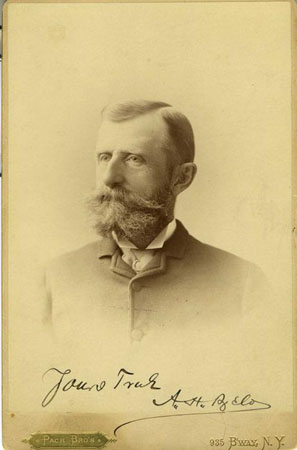 Alfred Horatio Belo, journalist, was born in Salem of Moravian ancestry. His father was Edward Frederick Belo, a cabinetmaker, merchant, and would-be railroad builder. His mother, Caroline Amanda Fries, was also of Moravian descent. Brought up in comfort and plenty, Belo was educated at Salem Boys' School, the Masonic Institute at Germanton, and Wilson's Academy in Alamance County. Under his father's discipline, he worked diligently, during vacations and after school, in his father's store, at the mill, or on the farm. By 1860 his father sent him to New York and other large cities with a free hand to purchase merchandise for the general store.

Though against secession, Belo sided with the South and helped form a company in 1861. Commissioned a captain in the Forsyth Riflemen, he served in Virginia, then as adjutant of the camp of military instruction near Raleigh, and later in many campaigns in Virginia. He was with Longstreet in the attack on Suffolk, where he became involved in a well-known and violent dispute involving Colonel J. K. Connally, Colonel L. R. Terrell, and Captain John Cussons, over the questionable behavior of the Fifty-fifth North Carolina Regiment in protecting Stribling's Battery. In the first round of the duel, Cussons received a hole in his hat; in the second, Belo's neck was grazed, though he was ready for a third round when the dispute was settled by agreement among the officers involved. During extensive service in the Virginia campaigns, he received severe wounds at Gettysburg and Cold Harbor. His valor was honored for the rest of his life. 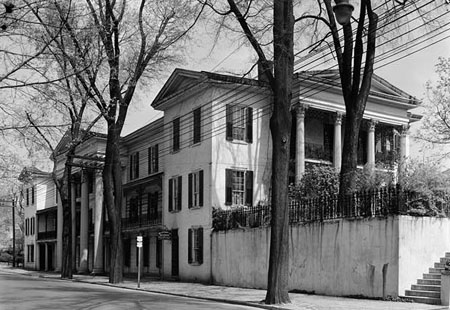 Immediately after the Civil War, either because of his health or in order to join General Kirby Smith, Belo set out on horseback for Texas. He served for a brief time as tutor to the children of a planter near Houston. In August 1865, in answer to an advertisement for a bookkeeper, he joined the Galveston News. The News was then controlled and edited by Willard Richardson, a transplanted South Carolinian and an extravagant admirer of John C. Calhoun. Belo was admitted to partnership in the company on 4 Mar. 1866. After Richardson's death in 1875, Belo purchased the paper, apparently with money from his wife's family. He established A. H. Belo and Company, installed improved machinery, and proceeded to make the Galveston News into a strong paper with nearly state-wide circulation.

As the North Texas area grew, Belo found he was unable to get adequate railroad connections and postal facilities to all parts of Texas from his extreme eastern location. In 1885 he chose Dallas as a central and suitable location for better distribution of a newspaper, moved there, and undertook a new paper. His Dallas Morning News soon outgrew the Galveston News. For a time both papers were issued simultaneously every day in the year. Belo and his associates established special service to Ft. Worth, insuring connections with the west, southwest, and south of Texas. He also published weekly and semiweekly editions of both papers. In the first edition of the Dallas Morning News, 1 Oct. 1885, Belo laid down his editorial policy as commitment to "reform and 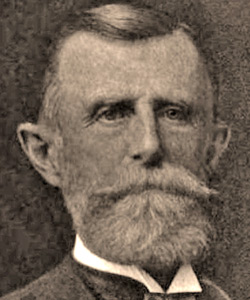 progress but also to uncompromising conservatism in the fundamental point of law and order as absolutely indispensable to liberty and security." The new paper was greeted by the Houston Age as sure to be frequently on the wrong side of public policy and sure also to be "a splendid illustration of live, enterprising, talented, pushing, ambitious Southern journalism." This was something of a true prophecy: the Dallas Morning News became and remained a strong voice for conservative institutions, with a wide circulation and substantial influence on the political life of the state.

On 30 June 1868, Belo married Jeannette Ennis, the daughter of Cornelius Ennis, a wealthy merchant, cotton buyer, and railroad builder who came to Texas from New Jersey in 1839. They had two children, A. H., Jr., who died in 1906, and Jeannette, who married Charles Peabody. Belo never discarded his affection for his native state; he died there, in Asheville, and was buried in the Salem Cemetery in Winston Salem (his wife's religious affiliation prevented the choice of the Moravian Graveyard, which he would have preferred). Though always a Moravian at heart, Belo became an Episcopalian. He was nominally a Democrat, for local reasons, but in reality he preferred the Republican party, perhaps because of his Whig background. He professed to be a close friend of President Cleveland.