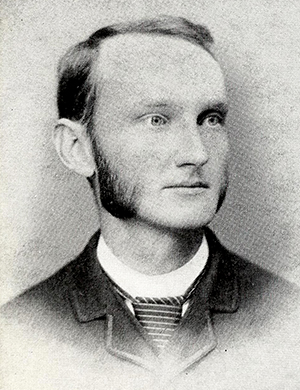 Kemp Plummer Battle, Jr., physician and professor, was born in Raleigh of English, Welsh, and Scottish ancestry. He was the eldest son of Kemp Plummer Battle, who served with distinction as president of The University of North Carolina (1876–91), and Martha Ann Battle, a distant cousin of his father. At age twelve he entered the Bingham School in Mebane. Entering The University of North Carolina in 1875, he was graduated with honors in 1879 and studied medicine there for one year. He received his M.D. degree from the University of Virginia in 1881 and, the following year, a second degree in medicine at the Bellevue Medical College in New York City. Two years of internship followed; the first in Charity Hospital, Blackwell's Island, N.Y., and the second in Blackwell's Island Insane Asylum. Through competitive examination he secured a position as assistant surgeon in the U.S. Marine Service, but he relinquished it in 1885 to take special studies in London, England, in diseases of the eye, ear, nose, and throat.

Three letters addressed to the editor of the North Carolina Medical Journal and published during Battle's sojourn in London and Paris, 1885–86, afford insight on the professional orientation that was to enhance his future career as an American pioneer teacher in the emerging surgical specialties of ophthalmology and oto-laryngology. He began attendance in May 1886 at Moorsfields, the hospital named for that old part of London where the Royal London Ophthalmic Hospital, founded in 1804, was situated. Patients were assigned to students in open clinics under supervision of many of the great teachers of the day: Warren Tay, Sir John Tweedy, Andrew Lang, Sir Jonathan Hutchinson, Landolt, and Galezowski. The broadest range of eye ailments was provided, and students were required to become proficient in the use of the ophthalmoscope and retinoscope. Practical courses in operative surgery were offered in the postmortem rooms of St. Thomas' Hospital; there the student was exposed to the most advanced techniques of cataract extraction. Afternoons were spent in Sir Morell MacKenzie's Throat Hospital in Golden Square, where basic principles of laryngology and rhinology were given upon a firm literary expression.

Nor were Battle's interests confined to his specialty studies. He attended a session of the British Medical Association at Brighton and recorded personal vignettes and professional opinions of Lawson Tait, Sir Spenser Welles, Sir Henry Thompson, and American guests: Dr. Frank Billings, Dr. Nathan Smith Davis, and Dr. Graham Lusk. He regularly attended meetings of the Ophthalmological Society of the United Kingdom, where he was further privileged to hear lectures and discussions of Jonathan Hutchinson and of Dr. John Hughlings Jackson, who introduced "use of the ophthalmoscope in the diagnosis of brain disease." Visiting the wards of King's College Hospital, he was welcomed to accompany Sir Joseph Lister when he "walked the wards" and to witness Lister's operations, where he could observe "the antiseptic method" of surgery and sense the evolution of this technique since its inception in 1867. The Hunterian Museum was a favorite haunt, and the graphic resumé of his impressions is impeccable. The highlight of his stay in Paris was a visit to Pasteur's laboratory in the Rue d'Ulm. In two pages he records a vivid and concise description of Pasteur's research on rabies.

Returning to Raleigh, Battle entered practice with Dr. Richard Henry Lewis II, the husband of his oldest sister, Cornelia ("Nellie") Viola. This association continued for twenty-eight years. Dr. John B. Wright joined the partnership in 1914 and Dr. Vonnie M. Hicks in 1921. From 1885 to 1913, Battle was professor of physiology in the Leonard Medical School of Shaw University in Raleigh and, from 1903 until 1910, professor of diseases of the ear, nose, and throat in the Raleigh branch of the Medical Department of The University of North Carolina.

From 1886 through 1907, Battle produced eighteen publications emphasizing his specialty of otolaryngology; legislative support for preventive and restorative measures for children prone to eye, ear, nose, and throat ailments; and improved communication between family physician and specialist. He was conversant with scientific progress at home and abroad and introduced diagnostic criteria, techniques, and instruments, some of which bear his name.

In private life his intellectual acumen made him valuable as a manuscript editor and proofreader. He paid frequent visits to the clinics of professional colleagues in the East and Midwest. An experienced Appalachian mountain climber, he was a substantial supporter of his university's first gymnasium, built in 1885.

Battle was one of the first three ear, eye, nose, and throat practitioners in North Carolina. He was a member of the state board of medical examiners from 1897 to 1900, was president of the Wake County Medical Society in 1913 and belonged to the Raleigh Academy of Medicine and the American Academy of Ophthalmology and Laryngology. He was ophthalmologist of the North Carolina School for the Blind, visiting oculist and aurist of Rex and St. Agnes' hospitals, and regional oculist of Seaboard Airline Railroad. He served as secretary-treasurer of the board of trustees of St. Mary's School, vestryman of the Church of the Good Shepherd and director of the Mechanics Savings Bank.

Battle was married first, on 4 Feb. 1890, to Eliza N. McKee of Raleigh, a sister of Dr. James McKee; she died on 12 Apr. 1919. His second marriage was to Mrs. Sally Hall Strong of Raleigh, who survived him. There were no offspring from either marriage.

Battle died in the Chestnut Hill Hospital of Philadelphia, following an illness of seven months, and was buried in Oakwood Cemetery in Raleigh.

[Hubert A. Royster], Historical Sketch of the University of North Carolina Medical Department at Raleigh (1941).

Transactions of the Medical Society (Apr. 1922).