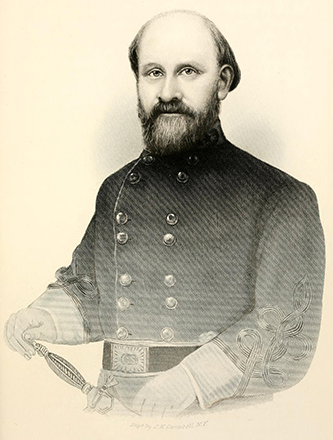 Rufus Clay Barringer, Confederate Army officer and legislator, was a descendant of French Huguenots who left France during the early seventeenth century for England and Germany. Barringer's grandfather, John Paul, known as "Pioneer Paul," was born in the Duchy of Württemberg on 4 June 1721. He left Germany on the ship Phoenix and arrived in Philadelphia on 30 Sept. 1743. He and his first wife, Anna Eliza Eisman, originally settled in the Wyoming Valley of Pennsylvania. In 1753 they migrated to Dutch Buffalo Creek, now part of Cabarrus County. Anna Barringer died in 1777, leaving two children, John Paul and Catherine. John Paul later married Catherine Blackwelder, and this marriage produced seven children. Paul, the eldest, served in the state legislature, as a Concord magistrate, and as a general in the War of 1812. He was a prosperous planter and a successful merchant. His marriage to Elizabeth Brandon, daughter of a distinguished North Carolina family, produced ten children.

Rufus Clay Barringer, their ninth child, was born in Cabarrus County. He was graduated from The University of North Carolina in 1842 and studied law with his brother, Daniel Moreau, a law partner of Chief-Justice Richmond M. Pearson. After completing the bar requirements, Rufus Barringer settled in Concord and, from 1848 to 1850, represented Cabarrus County in the House of Commons. In 1854, at the age of thirty-three, he married Eugenia Morrison, his first wife. She died in 1858, and in the winter of 1861 while serving with the Confederate forces he married Rosalie Chunn of Charlotte.

Politically, Rufus Barringer was a Whig who favored African-American suffrage. Although he was devoted to the Union and the Constitution, he placed North Carolina's interests first. He urged the North Carolina Assembly to arm the state, and, when North Carolina seceded from the Union, he was among the first to volunteer. On 16 May 1861, Barringer became captain of Company F, First North Carolina Cavalry. He was promoted to major on 26 Aug. 1863 and to lieutenant colonel in November of that year. In June 1864 he was commissioned brigadier general and took over command of North Carolina's cavalry brigade, which consisted of the First, Second, Third, and Fifth Regiments. Barringer fought in seventy-six actions and was wounded three times. He was cited for gallantry at the battles of Willis' Church, Brandy Station, Auburn Mills, Buckland Races, Davis' Farm, Reams' Station (where he commanded a division), and Chamberlain Run, which was the last decisive Confederate victory in Virginia. Barringer was captured on 3 Apr. 1865 at Namozine Church. While confined at City Point prison, he met President Lincoln, in Lincoln's first encounter with a Confederate general.

After the war, Barringer returned to politics and advocated North Carolina's acceptance of the Reconstruction Acts of 1867. He served in the 1875 North Carolina Constitutional Convention but was defeated in 1880 when he ran for lieutenant governor. In 1865, Barringer moved to Charlotte. He maintained law offices there and in Concord until his retirement from the bar in 1884 and was a key figure in establishing North Carolina's rail system. Barringer devoted the later part of his life to detailing a series of cavalry sketches that described the significant battles in which he had participated. Before he died, he completed a history of the Ninth Regiment. His third wife, Margaret Long of Orange County, and three sons survived him.

Campbell, J.K. "Rufus Barringer." A memorial volume of the Guilford Battle Ground Company. Organized May 6, 1887, at Greensboro, N.C. It contains a brief history of the battle of Guilford Court House, an account of the organization and progress of the Guildford Battle Ground Company, biographical sketches, and a full account of the Holt monument and its dedication, July the 4th, 1893. Greensboro, N.C., Reece & Elam, printers. 1893. 125. https://archive.org/stream/memorialvolumeof00guil#page/124/mode/2up (accessed March 22, 2013).

I have authored a biography

I have authored a biography of General Rufus Barringer, which is due to be released by Savas-Beatie in mid-June 2015. More than 20 years of research went in to this biography. See new web site for General Barringer at www.generalrufusbarringer.com.

Thanks for letting NCpedia and its readers know about this upcoming additional resource!