Micajah Autry, western pioneer and soldier, was born in Sampson County, the son of Theophilus and Elizabeth Crumpler Autry. When he was six years old, his family moved to Cumberland County, where his parents lived until their death. 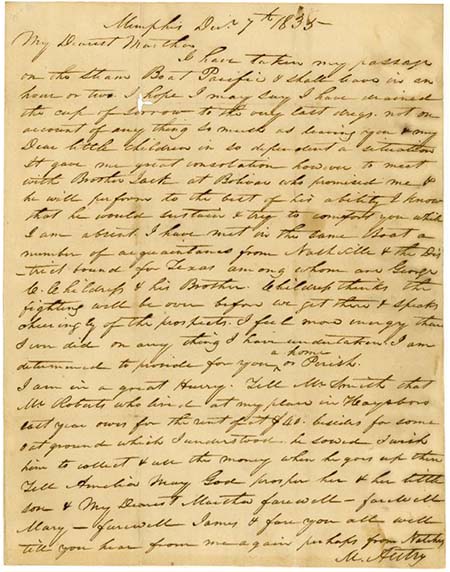 Young Micajah showed an early interest both in books and in warfare. Volunteering when eighteen or nineteen for military duty during the War of 1812, he served as a private in Captain William Lord's company, which marched to the defense of Wilmington when it was threatened by the British. He served for the duration of the war.

According to family tradition, Autry returned home stricken with chills and fever. Unable to farm, he prepared himself as a teacher. By 1823, however, he was drawn westward to begin his career as one of the frontier adventurers who went to Texas to aid in the struggle for separation from Mexico.

First settling in Hayesboro in middle Tennessee, he taught and studied law there. In 1824 he married Mrs. Martha Wyche Putney Wilkinson, the prosperous widow of a doctor, by whom she had one daughter, Amelia. Of the several children born to Martha and Micajah, two lived to maturity: Mary became Mary Autry Greer of Beaumont, Tex. and James died in the first battle of Murfreesboro at the head of a Texas regiment during the Civil War.

According to his daughter, Micajah Autry was an intelligent and sensitive individual who liked to sing, especially the song of the "Good Old North State." He also enjoyed playing the violin, painting, and writing poetry, although he apparently did not pursue any of these interests seriously.

Ambition and circumstances continued to draw Autry westward. While in Hayesboro, near Nashville, he apparently became acquainted with Andrew Jackson and other Tennessee politicians. His daughter later claimed that Autry knew Sam Houston well and voted for him as governor of Tennessee. He moved his family and slaves westward to Jackson, Tenn., in 1831. While there, he joined in law practice with Andrew L. Martin. Although they prospered in law, their attempt to establish a store failed. In an attempt to recoup his losses, Autry decided to investigate Texas as a possible place to resettle his family.

While in Jackson, Autry became acquainted with David Crockett, who, after being defeated by a Jacksonian politician, had become disillusioned with Tennessee politics. Some evidence indicates that Autry admired Crockett and may have been influenced by him in deciding to explore Texas.

In late 1835, Autry set out for Texas, stopping first at Memphis, Tenn., and then at Natchitoches, La., sending letters of his travels to his wife from both places. He traveled from Memphis down the Mississippi and up the Red River to Natchitoches on the steamboat Pacific. Unsure of the conditions that existed in Texas, he and a companion made a side trip from Natchitoches to New Orleans to inquire about events in Texas and to check on the best route. Autry then walked the 115 miles from Natchitoches, La., to Nacogdoches, Tex., where the Texas frontier apparently captured his enthusiasm. He wrote to his wife, "I go whole Hog in the cause of Texas. . . . There is not so fair a portion of the earth's surface warmed by the sun." Autry also revealed in the letter one of his motives for going to Texas and serving in the army; such service, he believed, would entitle him to 640 acres of land, with an additional 4,444 acres if he settled his family in Texas. His heirs eventually received 3,840 acres, given in two grants, 1839 and 1846, for Autry's service in the cause of the Texas revolution.

The trip to Nacogdoches proved fateful for Autry. At San Augustine he joined a company led by Captain H. S. Kimble from Clarksville, Tenn. After arriving in Nacogdoches, Autry was sworn in as a member of the Volunteer Auxiliary Corps for six months. Although his name was misspelled on the muster roll (M. Authey), his heirs were granted land donations partly on the basis of that list.

Autry indicated that he planned to proceed with the company to Washington-on-the-Brazos. Whether he did so is unknown; the next news of him was of his death at the Alamo. A postscript to his last letter from Nacogdoches reads, "Col. Crockett has joined our company." Autry apparently was pleased, and tradition has it that Autry served with Crockett's brigade at the Alamo. Given his prior acquaintance with Crockett and his association with other Tennesseans in the trek to Texas, he probably was indeed part of Crockett's defense of the south wall of the Alamo. If so, he was among the first to die when the Mexicans swarmed over that wall of the mission-fortress on 6 Mar. 1836. His name stands fourth in the alphabetical listing on the monument to those who died in defense of the Alamo. He is among those whom Texans honor today in celebrating the Texas revolution.

Adele B. Looscan, "Micajah Autry, A Soldier of the Alamo," Quarterly of the Texas State Historical Association 14 (1910–11).

Hal Wyche Greer’s father, my great-great grandfather, was James Madison Greer, born in Paris, Tennessee, on January 29, 1816. He married Mary Elizabeth Autry (1827-1915) in Holly Springs on December 23, 1841. Yes, the dates are right. Mary was only 14 when they were married, but her first child was not born until she was 20.

Mary Autry’s father was Major Micajah Autry, who was born in Samson County, North Carolina in 1795, fought in the War of 1812, married Martha Wyche Putny Wilkinson (this explains some of our names) in 1824, and died March 6, 1836 in the famous “Battle of the Alamo” in San Antonio, Texas. If you visit there you can see his name engraved on the wall. A portrait of him hangs inside.

Thank you for visiting NCpedia and especially for sharing this information. We know future viewers will find this additional information helpful.