Alexander Boyd Andrews, Jr., attorney, Masonic official, and amateur historian, was born in Henderson, the second son of Alexander Boyd Andrews, senior vice-president of the Southern Railroad, and his wife, Julia Martha Johnston. After studying at the Raleigh Male Academy, he entered The University of North Carolina, where he was a member of the Dialectic Literary Society, Sigma Alpha Epsilon fraternity, and the Order of the Gimghouls. After being graduated in 1893 with a Litt. B. degree, he studied law at the university for a year and was admitted to the bar in September 1894.

Andrews commenced practice in Raleigh and remained there for the rest of his life. A president of the Wake County Bar Association in 1928 and 1929 and of the state bar association at the same time, he also served on the American Bar Association's Committee on Legal Education and, from 1922 to 1943, its Committee on Judicial Salaries, chairing the latter committee from 1922 to 1935. He was a member of the Raleigh Board of Aldermen from 1900 to 1904 and briefly acted as mayor pro tempore. In 1930 he chaired the executive committee of the state advisory committee for Furnifold M. Simmons's unsuccessful campaign for renomination to the U.S. Senate. 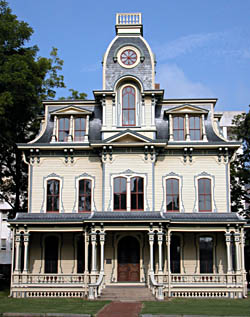 Most of Andrews's activities, however, were devoted to private charitable pursuits. A member and past master of the William G. Hill Lodge, he attained the Thirty-third Degree in the Scottish rite, served as state grand commander in the Knights Templar in 1906 and in 1908 was grand high priest of the state Grand Royal Arch Chapter. In 1916 he was elected grand master of the Grand Lodge of North Carolina. While in office, he was instrumental in arranging Masonic loan funds at several North Carolina colleges and in obtaining dispensation for a state temple of the Ancient Arabic Order, Nobles of the Mystic Shrine. When the Sudan Temple was instituted at New Bern on 26 Sept. 1917, Andrews was elected its first illustrious potentate. He was also an exalted ruler of the Raleigh Elks Lodge and a president of the Raleigh Kiwanis Club.

A devoted student of North Carolina history and lore, Andrews amassed an enormous collection of historical pamphlets and documents. In 1928 he published and distributed thousands of copies of the state anthem at his own expense. At his death, his collection went to The University of North Carolina, East Carolina Teacher's College, and the New Bern Public Library. He wrote numerous articles on Masonic and Episcopal church history, including a digest of Masonic law and an unpublished biographical sketch of William Joseph Williams (1759–1823), the North Carolina artist and Mason. His "Richard Dobbs Speight" (North Carolina Historical Review 1 [April 1924]) is considered a model of objective scholarship and attention to detail. A member of the American Statistical Association and an accomplished amateur statistician, Andrews regularly, on his own volition, issued statistical reports on various aspects of public policy. Some of these, such as his 1942 census of graduate degrees held by state college instructors, which indicated a marked inequality in the staffs of white and Negro institutions, excited considerable controversy.

On 5 Nov. 1908 Andrews married Mary Helen Sharples, of Media, Pa. The couple had no children. Andrews died at his home in Raleigh and was buried in Oakwood Cemetery.