Singer Clay Aiken was born November 30, 1978 in Chapel Hill, North Carolina, but grew up in nearby Raleigh. His parents are Faye Aiken Parker and the late Vernon Grissom.  As a youth, he was a member of a local boys choir. During his teen years, Aiken was a member of the local theater community and performed in school theater productions at Leesville High School, including a production of Oklahoma! Aiken also sang several times at Raleigh IceCaps and Carolina Hurricanes hockey games. In addition to pursuing his musical interests, Aiken worked at the local YMCA in Raleigh.

Clay Aiken rose to fame in 2003 during the second season of the television series American Idol, taking second place. In the same year, Aiken released his debut album, Measure of a Man (2003), and also earned his bachelor’s degree in special education from the University of North Carolina at Charlotte. Measure of a Man sold over 613,000 copies in the United States in only its first week of release and garnered him a nomination for Male Choice TV Reality/Variety Star by the Teen Choice Awards. 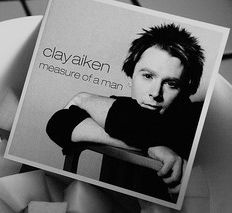 Since his Idol beginnings, Aiken has released six full studio albums: Measure of a Man (2003), Merry Christmas with Love (2004), A Thousand Different Ways (2006), On My Way Here (2008), Tried and True (2010), and Steadfast (2012). In the same week Merry Christmas with Love was released, Aiken published a non-fiction book, Learning to Sing: Hearing the Music in Your Life, which quickly climbed to the number two spot on the New York Times bestseller list.

Aiken has undertaken several humanitarian projects. In 2004, he was named a UNICEF Ambassador, assisting in improving the lives and ensuring the education of children in unstable nations around the world. He was also a partner in creating the National Inclusion   Project,which provides support for children with disabilities in adapting to the outside world. Aiken is an also active supporter of the Gay, Lesbian, and Straight Education Network.

In 2008, Aiken had a son, Parker Foster Aiken, with Jaymes Foster, a close friend.

On February 5, 2014, Aiken announced that he was running for the Democratic Party nomination for North Carolina's 2nd Congressional District. He won the Democratic primary held on May 6, 2014 but lost to Republican incumbent Renee Ellmers in the general election on November 4, 2014.

Birthday is November 30, not

Birthday is November 30, not 20
He was born in Raleigh, not Chapel Hill

Thanks for visiting NCpedia

Thanks for visiting NCpedia and leaving a comment. We will take a look at your suggestions and update accordingly.